A disturbed childhood, scarred with bitter experiences of racial discrimination, left a permanent mark on young Richard Wright, who later went on to become an internationally recognised writer. His writings laid an enormous impact on the social and intellectual history of the United States of America, in the second half of the 20th century. Sometimes regarded as a controversial writer, Richard’s writings were centred on racial themes and the suffering of the African-American people. In an era, where racism was one of the most distressing issues in the American society, his writings invoked a sense of togetherness among the African-American community and inspired many people to raise their voices and live with dignity. His best known works include ‘Native Son’, ‘Black Boy’, ‘Uncle Tom's Children’, ‘The God that Failed’ and The Outsider’. He also wrote many short stories, essays and other non-fictional books and the themes of all these works, were yet again racial discrimination and challenges faced by the average African-American. He has influenced many young writers and many of his works are part of the academic syllabuses across schools, colleges and universities in many parts of the world. To learn more interesting facts about his personal life and professional achievements, scroll down and continue to read this biography. American Celebrities
Short Story Writers
Non-Fiction Writers
American Men
Virgo Writers
Childhood & Early Life
Richard Nathaniel Wright was born in Plantation, Roxie, Mississippi to Ella Wilson, a school teacher, and Nathaniel Wright, a sharecropper. He was raised mostly by his maternal grandmother in Jackson, Mississippi.
He attended the Smith Robertson junior high school, where he gave the valedictorian speech. He later attended the Lanier High School in Jackson, but had to drop out to earn a living.
Deeply affected by racism all through his younger days, he authored his first story titled ‘The Voodoo of Hell's Half-Acre’, which was published in the Southern Register, a local African newspaper.
In 1927, he moved to Chicago, where he secured a job as a postal clerk and spent his spare reading acclaimed writers and studying their writing styles.
In 1933, he became frustrated with the American capital system, after he lost his postal clerk job and joined the Communist Party, for which he authored many revolutionary poems.
In 1936, his story ‘Big Boy Leaves Home’ was published in ‘New Caravan’ and the same year he joined the National Negro Congress and became the chairman of the South Side Writers Group. 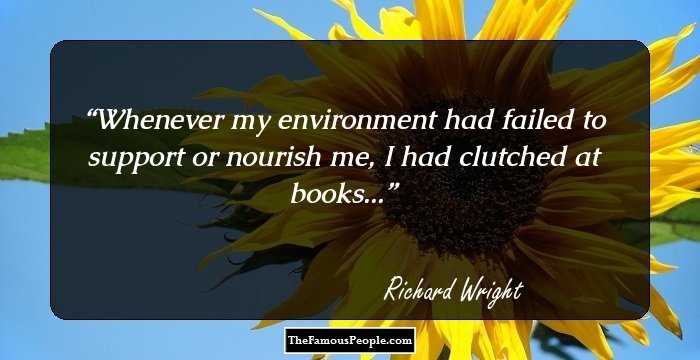 The Best Black Actresses Of All Time
Career
In 1937, he moved to New York to seek better opportunities for his writing career and subsequently wrote for the WPA Writers' Project guidebook to the city, ‘New York Panorama’.
In 1938, his collection of short stories titled ‘Uncle Tom's Children’ was published after which he became financially stable.
In 1940, his novel ‘Native Son’, a story about a 20 year old African-American living in poverty was published by Harper & Brothers.
Published in 1945, ‘Black Boy’, his semi-autobiographical book offered an insight into his childhood, experiences of racism and his eventual move to Chicago.
In 1949, his essay ‘The God that Failed’, which contained a collection of writings from a number of ex-communists, writers and journalists was published.
In 1953, his novel ‘The Outsider’, a complex story about racism in America was published by the ‘Harper & Brothers’ publishing house.
In his 1951 essay, ‘I Choose Exile’, he gives a detailed account of his experiences of racial discrimination in New England and his final decision to migrate to France.
In 1955, after he attended the Bandung Conference in Indonesia. He wrote about his experiences at the conference and observations of Indonesian culture in ‘The Color Curtain: A Report on the Bandung Conference’. 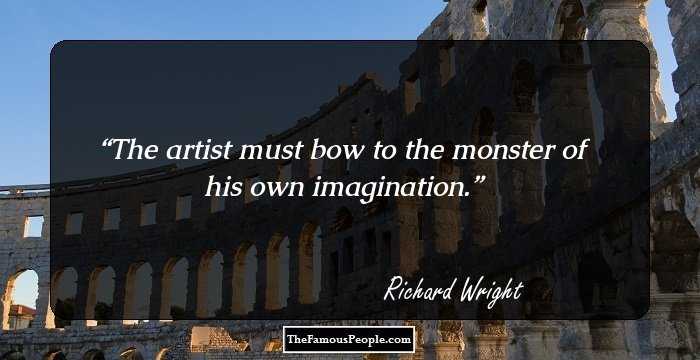 Continue Reading Below
Major Works
His novel ‘Native Son’ was included in ‘Time Magazines’ list of ‘100 Best English-language Novels from 1923 to 2005’ and The Modern Library placed it at number 20 on its list of the ‘100 best novels of the 20th Century’.
His semi-autobiographical book ‘Black Boy’ was an immediate bestseller and is one of seminal works that has historical, sociological, and literary significance. The book influenced writers like James Baldwin and Ralph Ellison.
Awards & Achievements
In 1939, he was awarded the Guggenheim Fellowship, for which he earned a prize of $500.
In 1949, he received the Spingarn Medal by ‘National Association for the Advancement of Colored People’ (NAACP), an annual award given for outstanding achievement by an African-American. 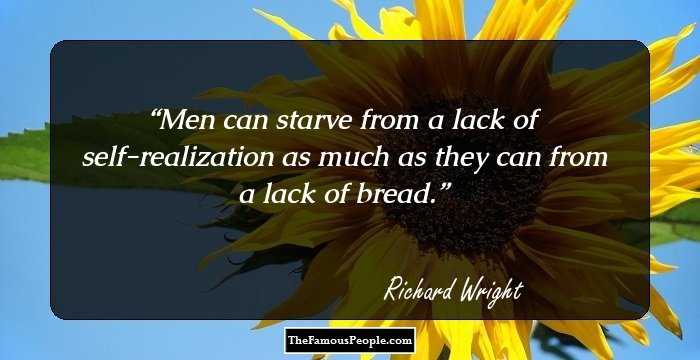 Personal Life & Legacy
In 1939, he got married to Valencia Barnes Meadman, who was a modern-dance teacher of Russian-Jewish descent. The couple had two daughters, Julia and Rachel. After divorcing Valencia, he got married to Ellen Poplar in 1941.
In 1946, he shifted to Paris and became a permanent American expatriate.
In 1957, he was diagnosed with amoebic dysentery.
He died of a heart attack at the age of 52 in Paris, France.
In 2009, he was featured posthumously in a 90-minute documentary about the WPA Writers' Project titled ‘Soul of a People: Writing America's Story’.
Trivia
This acclaimed African-American writer was once stranded on a ship on which he spent several days; he was finally rescued by authorities.
Recommended Lists:
Writers #301
You May Like

Quotes By Richard Wright | Quote Of The Day | Top 100 Quotes

See the events in life of Richard Wright in Chronological Order