Warren G. Harding was the 29th President of the United States, often counted among the worst in historical rankings of the U.S. presidents. Ironically, he was a popular president during his administration which lasted from March 4, 1921 until his death on August 2, 1923, but his image eroded considerably following the exposure of several scandals that took place under him. Having become the president shortly after the end of the World War I, Harding promised to his citizens that he would focus all his efforts on restoring the country back to normalcy. The son of a doctor, he enjoyed a comfortable childhood and received his education form Ohio Central College. After juggling a few unrelated jobs, he bought a near-defunct newspaper and transformed it into a flourishing one. He eventually entered politics, partly on basis of his wife’s urging who believed her husband possessed the qualities to succeed in the field. A staunch Republican, he was elected to the U.S. Senate where he actively supported business interests. He set his ambitions higher and ran for the office of the President of the U.S. in 1920. He easily won the election and assumed office in 1921. However, he died in office long before the completion of his term American Celebrities
American Men
Male Leaders
Scorpio Leaders
American Leaders
Childhood & Early Life
Warren Gamaliel Harding was born on November 2, 1865, in Blooming Grove, Ohio. He was the eldest of eight children born to George Tryon Harding, Sr. and Phoebe Elizabeth. His father, originally a farmer and a teacher eventually went to medical school and became a doctor. His mother was a midwife.
He enrolled at Ohio Central College in Iberia in 1879 and graduated in 1882. 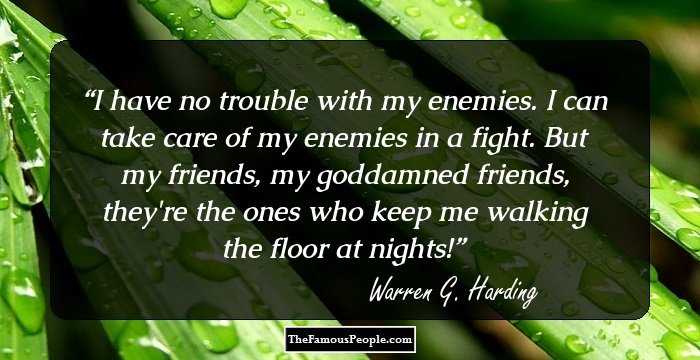 Quotes: Me, Friends, I
Continue Reading Below
Career
Harding was confused regarding his future after his graduation. He worked for a while as a teacher and as an insurance man. He also considered studying law. He then raised some money and purchased a near-defunct newspaper, ‘The Marion Star’.
He spent the next few years in promoting the newspaper and after struggling for a while, he was successful in establishing the newspaper as a profitable one. Married by now, he received great support from his wife in managing the newspaper. She also motivated him to join politics.
He entered politics and won a seat in the Ohio legislature in 1898 and served two terms. He was a conservative Republican, and with his charming demeanor and friendly nature, he soon became popular within the Republican circles.
In 1903, he was made the lieutenant governor and served in this post for two years. He ran for governorship in 1910 but was unsuccessful.
In 1914, he became a U.S. senator from Ohio. In this role he actively promoted business interests. Even though he held strong views on issues like prohibition and women’s suffrage, he was absent for many of the debates on these key issues and did not actively participate in the legislature procedures. However, he still remained popular as he was of affable nature and made no enemies, partly because he never took any stands.
Warren Harding was handsome and always well-groomed. He had the looks of a distinguished gentleman which paired with his congenial nature made him a much liked personality. Harry Micajah Daugherty, a key political insider, realized that Harding “looked like a president” and began to promote him for the Republican presidential nomination in 1920.
Harding easily emerged as the presidential nominee, with Calvin Coolidge as his running mate and Daugherty became his campaign manager. Harding won the 1920 presidential election, gaining 61 percent of the popular vote and winning 37 of 48 states in the Electoral College.
He was inaugurated as the president on March 4, 1921. Upon becoming the president, he named Daugherty the Attorney General of the United States. Soon after assuming office Harding realized that he was not prepared for presidency and felt overwhelmed by the responsibilities.
He made it a point to appoint the best suited person to important administrative positions and appointed Andrew Mellon at the Treasury, Herbert Hoover at Commerce, and Charles Evans Hughes at the State Department. He also appointed Charles G. Dawes as the first director of the budget after a budget system for the federal government was established.
While Harding’s administration had some highly effective members like Mellon, Hoover and Hughes, there were also several unscrupulous and corrupt appointees in the government. Many scandals took place during his tenure, the most notorious one being the Teapot Dome scandal, a bribery incident that greatly damaged the public reputation of the Harding administration.
In spite of all the shortcomings in his administration, Harding remained a popular president until his untimely death in 1923. Several scandals in his government were exposed after his death and eventually his posthumous reputation began to suffer. 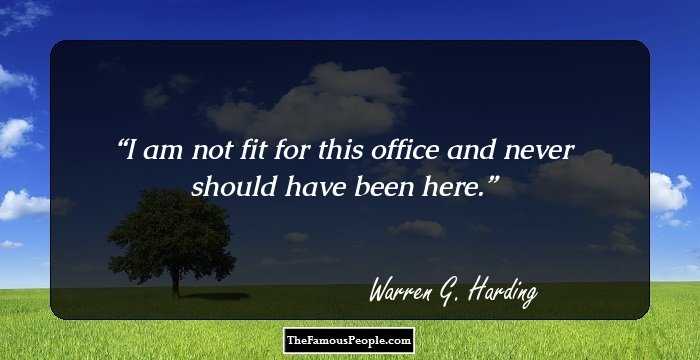 Quotes: Never, I
Personal Life & Legacy
Warren Harding married Florence Kling, a divorcee five years his senior, in 1891. The couple had no children of their own though Florence’s son from her previous marriage lived with them sometimes.
Harding was known to be a womanizer and had been involved in several extramarital affairs. One of his well-known affairs was with Carrie Phillips, a friend of his wife. Another one of his mistresses was Nan Britton, a woman who publicly claimed that Harding was the father of her daughter. Considered scandalous during that time, this claim was verified by DNA testing in 2015.
Harding, along with his wife and a few others, undertook a trip to Alaska in June 1923. They returned home towards the end of July when Harding began to suffer from heath problems. He died on August 2, 1923, at the age of 57. The cause of his death was either a massive heart attack or cerebral hemorrhage.
Trivia
This American president is often regarded as the “Worst President” in historical rankings of the U.S. presidents. 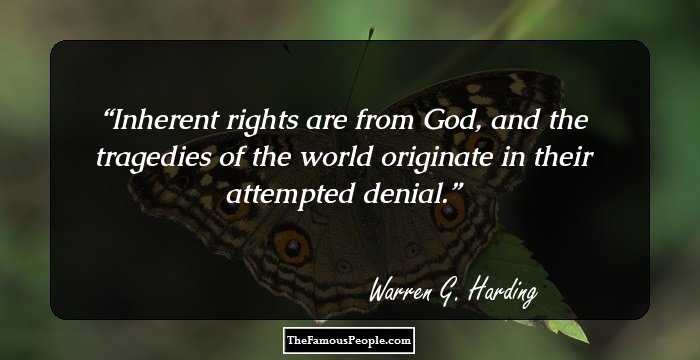 See the events in life of Warren G. Harding in Chronological Order