Vint Cerf is one of the most significant scientists, of contemporary times, who has been instrumental in designing and developing the TCP/IP protocols along with engineer Bob Kahn. After completing his schooling he took up Mathematics as a subject and earned a bachelor’s degree in it. After this he got a job as systems engineer and then directed his attention to computer science and premeditated on the subject in his post-graduation. He trained under the tutelage of some eminent scientist and himself did some important research during his university days. His encounter with electrical engineer Robert E. (Bob) Kahn presented a new world of possibilities before him and these two scientists together made significant contribution to the world of science. They worked day in and day out and their hard work and patience paid when they designed the basis of internet, that is, the TCP/IP protocols. Cerf worked with many scientific associations and helped them develop and enhance their efficiency. This visionary scientist even outlined the future of technology after he became the Chief Internet Evangelist of Google. He and Kahn made some of the most important advancements revolving around internet, and it is because of these two people that the world is now considered a global village. American People
Stanford University
University Of California, Los Angeles
Male Scientists
Cancer Scientists
Childhood & Early Life
He was born on 23rd June, 1943, in New Haven, Connecticut, US, to Vinton Thurston Cerf and Muriel (née Gray). He father was employed in an aeronautics company while his mother was a home-maker.
He received education at the ‘Van Nuys High School’, where future scientists Jon Postel and Steve Crocker were his classmates.
He completed his bachelor’s degree in 1965, from ‘Stanford University’, California, with mathematics as his subject. Thereafter, he got employed at ‘IBM’ (International Business Machines Corporation) in the position of a systems engineer.
During the same time, he also pursued his master’s degree in computer science from the ‘University of California’, Los Angeles (ULCA) which he completed in the year 1970. During his post-graduation, he got acquainted to engineer Robert E. (Bob) Kahn who had already been engaged with the ‘ARPANet’ network. 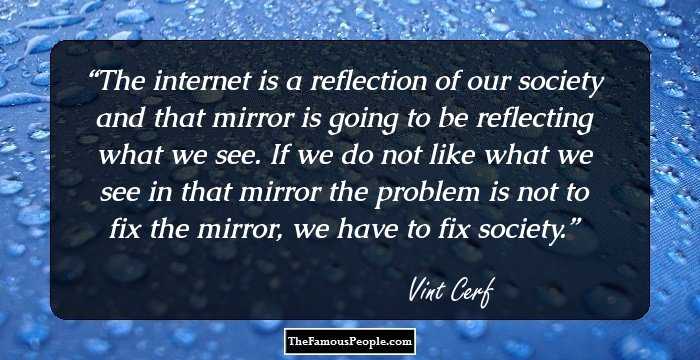 Quotes: Like
Continue Reading Below
Career
In 1972, he earned a doctorate in computer science from the ‘Stanford University’. Thereafter, he started working at the university as an assistant professor. During the same time, he also did research work on packet network along with Kahn and constructed the DoD TCP/IP protocol suite.
He joined the ‘Defense Advanced Research Projects Agency’ (DARPA) in 1976, and continued to conduct researches there for the next six years.
In 1982, he was appointed the vice president of ‘MCI Digital Information Services’, where he headed the operations of the ‘MCI Mail’, which was a commercial email service. He served in the position for the next four years.
The two engineers, Cerf and Bob Kahn, together initiated the ‘Internet Society’ in 1992. This society is a charitable organization formed in order to deliver internet related education and avail the use of the facility for the common man.
In 1994, he joined the ‘MCI Communication’ once again and was appointed as the Senior Vice President of Technology Strategy. In this capacity, he led the corporate strategy with a technical approach.
He collaborated with the ‘Gallaudet University’ in 1997 by becoming its trustee as well as a member of its ‘Board of Associates’. The university is dedicated to the education of people with hearing impairments.
In 1999, he became a member at the ‘Internet Corporation for Assigned Names and Numbers’. The ICANN is a non-profit organization which deals with internet security and stability and focuses on Internet protocol numbers and Domain Name System (DNS) root.
In October 2005, he was appointed as the Vice President of the multinational technology company ‘Google’. He was also the Chief Internet Evangelist of the company, and prophesied the future of internet and its effect on the society.
This eminent engineer has also been associated with the IT Advisory Council of President of Bulgaria, Georgi Parvanov. He has even been associated with the political risk consultancy named ‘Eurasia Group’.
Continue Reading Below
In 2008, he worked with the ‘IETF’ (Internet Engineering Task Force) as the chairperson of the ‘Internationalized domain name’ (IDNAbis).
He is engaged with research work on the space computer network called ‘Interplanetary Internet’ in association with ‘Jet Propulsion Laboratory’ of ‘NASA’.
This engineering genius has been a member of the International Advisory Board of the ‘International Multilateral Partnership Against Cyber Threats’ (IMPACT).
At present he is associated with the organization ‘Scientists and Engineers for America’ as a member of the board of advisors. He is also a member of the advisory council of the non-profit organization ‘CRDF Global’ (Civilian Research and Development Foundation), and ‘The Liquid Information Company Ltd’, UK.
He is also a trustee of the 'ARIN’ (American Registry for Internet Numbers) and one of the directors of the non-profit organization ‘StopBadware’ which works to provide Web safety. He, along with Tim Berners-Lee and Al Gore chairs the ‘Campus Party Silicon Valley’.
This accomplished engineer has been a member of the Governing Board of the ‘Smart Grid Interoperability Panel’ (SGIP) from 2009 to 2011.
In 2012, he was chosen as the President of the ‘Association for Computing Machinery’ (ACM) for a two-year term.
Major Works
This brilliant engineer has revolutionised the world of technology by developing the internet and taking it to advanced levels. He is credited with designing the TCP/IP protocols along with engineer Bob Kahn.
Awards & Achievements
In 1996, he was awarded with the ‘Yuri Rubinsky Memorial Award’. The same year, ‘The Franklin Institute’ honoured him with the ‘Certificate of Merit’. Two years later, he became a Fellow of the ‘IEEE’ (Institute of Electrical and Electronics Engineers).
Continue Reading Below
In 1997, the then President of the US Bill Clinton presented Cerf and Kahn with the ‘National Medal of Technology’.
In 2000, he became a Fellow of the ‘Computer History Museum’ and the same year, the ‘Library of Congress’ awarded him with the ‘Living Legend Medal’.
He was awarded with the ‘A.M.Turing Award’ in 2004. He shared this award with Bob Kahn, for their significant contribution towards the development of internet.
In 2005, he along and Kahn were together awarded with the ‘Presidential Medal of Freedom’ by the then president of the US George W. Bush. He has also received the ‘SIGCOMM Award’ for his contributions to the development of the internet.
In 2006, he was inducted in the ‘National Inventors Hall of Fame’ along with fellow scientist Bob Kahn.
In 2012, he was inducted into the ‘Internet Hall of Fame’, and the following year, he was honoured with the ‘Queen Elizabeth Prize for Engineering’ along with four other Internet and Web innovators.
During 2013-14, he was a recipient of the ‘Bernard Price Memorial Lecture’, and also honoured with the ‘Order of the Cross of Terra Mariana’ and ‘Officer of the French Légion d'honneur’.
Personal Life & Legacy
In 1966, Cerf married Sigrid, and is blessed with two children David and Bennett. The family resides in Virginia.
He has been awarded with several honorary doctorate degrees from various institutions like ‘Yale University’, ‘University of the Balearic Islands’, ‘University of the Balearic Islands’, ‘University of Pisa’, ‘University of South Australia’ and ‘Keio University’.

See the events in life of Vint Cerf in Chronological Order