Ken Thompson is an American computer science pioneer and the principal inventor of the 'UNIX' operating system. He proved his genius at 'Bell Labs,' where he designed and implemented the original 'UNIX' operating system, regarded as one of the bedrocks of modern computing. Thompson is credited for writing the 'B' programming language, the direct forerunner to an advanced programming language, 'C,' and co-creating the 'Plan 9' operating system. He is also the co-creator of the world champion chess-playing computer, 'Belle.' After leaving 'Bell Labs,' Thompson has worked at 'Google,' where he co-wrote the 'Go' programming language. His other notable works include the development of regular expressions and early computer text editors, 'QED' and 'ed,' and defining the 'UTF-8' encoding. For his incredible contributions to the field of computer science, Thompson has been felicitated with several awards and titles. American People
University Of California, Berkeley
Tall Celebrities
Tall Male Celebrities
Male Scientists
Childhood & Early Life
Thompson was born Kenneth Lane Thompson on February 4, 1943, in New Orleans.
Thompson graduated with a bachelor of science (1965) and a master's degree (1966), both in electrical engineering and computer science, from the 'University of California,' Berkeley.
Thompson has always been fascinated with logic. He had started working on arithmetic problems in binary while he was in grade.
Continue Reading Below
You May Like

Who Is The Most Popular BTS Member?
Career
Thompson joined the industrial research and scientific development company 'Bell Labs' in 1966, where he collaborated with fellow researcher Dennis Ritchie to work on the 'Multics' operating system. While writing the program for 'Multics,' Thompson created the 'Bon' programming language.
Thompson also created the 'Space Travel' video game which ran on 'Multics.' But 'Bell Labs' later withdrew from the 'Multics' project; hence, he found an outdated 'Digital Equipment Corporation' (DEC) PDP-7 minicomputer of 'Bell Lab' and rewrote the game on it.
Thompson began developing a more flexible operating system for the PDP-7. Ritchie subsequently joined him to lead a team of 'Bell Labs' researchers.
They later included Rudd Canaday to develop a hierarchical file system for easy inter-process communication and some small utility programs. Eventually, they created the 'Unix' operating system, which, unlike earlier systems, was not completely attached to any particular computer hardware.
Thompson then realized that 'Unix' required a system programming language and hence, along with Ritchie, created 'B' in 1969.
In the 1960s, Thompson worked on regular expressions, a sequence of characters that define a search pattern. He also developed the 'Compatible Time-Sharing System' version of the line-oriented computer text editor 'QED,' which included regular expressions.
Thompson developed the standard text editor on 'Unix ed,' which, along with 'QED,' which made regular expressions universal in 'Unix' text processing programs. He also invented Thompson's construction algorithm to convert the regular expression into a nondeterministic finite automaton, which made expression matching faster.
Throughout the 1970s, Thompson and Ritchie majorly worked on the 'Unix' operating system. In an interview in 2011, Thompson revealed that he wrote the initial 'Unix' versions while Ritchie advocated for the system and helped to develop it.
In 1980, Thompson was inducted to the 'National Academy of Engineering' while in 1983, with Ritchie jointly received the 'Turing Award' for designing 'Unix.'
Continue Reading Below
In 1971, when Thompson and Ritchie tried to move their system to a newer PDP-11 minicomputer, the loopholes of 'B' became apparent. To eliminate that, Ritchie extended the language and created the 'C' programming language. Later in 1973, they rewrote 'Unix' in 'C.'
In 1971, Thompson created a chess-playing program for the first version of 'Unix.' He Later, collaborated with fellow computer scientists at 'Bell Labs,' Joseph Condon, to write the world champion chess computer program, 'Belle.' 'Belle' was later donated to 'Smithsonian,' the world's largest museum and research complex.
Thompson also wrote programs for endgame tablebases, a computerized database that contains the comprehensive list of a pre-calculated analysis of chess endgame positions. Endgame tablebases allow the player to make "perfect" moves once a position stored in the database is reached.
Along with chess endgame expert John Roycroft, Thompson distributed his first results on CD-ROM. In 2001, the 'ICGA Journal' dedicated an entire issue to Thompson's contributions to computer chess.
In 1975, Thompson took a break from 'Bell Labs' to assist the installation 'Version 6 Unix' on a PDP-11/70 at his alma mater, UC Berkeley, which eventually came to known as the 'Berkeley Software Distribution' (BSD).
The following decade, Thompson and Ritchie revised the 'Research Unix,' which adopted a BSD codebase for its 8th, 9th, and 10th editions. In the mid-1980s, 'Bell Labs' replaced 'Unix' with a new operating system called 'Plan 9.'
Thompson utilized the principles of 'Unix' to design and implement 'Plan 9.' Some later versions of 'Research Unix,' such as 'MK' and 'RC,' were also incorporated into the new operating system.
Additionally, Thompson tested initial versions of the advanced 'C' language, the 'C++' programming language, by writing programs in it for its developer, the Danish computer scientist Bjarne Stroustrup. However, Thompson later stooped working on 'C++' due to incompatibilities between versions.
In a 2009 interview, Thompson criticized 'C++' and called the language "a garbage heap of ideas that are mutually exclusive."
Continue Reading Below
In 1992, Thompson collaborated with Canadian programmer Rob Pike to develop the 'UTF-8' encoding scheme, which eventually became an instrumental character encoding for the 'World Wide Web.'
In the 1990s, Thompson and Ritchie began working on the 'Inferno' operating system and simultaneously carried other researchers at 'Bell Labs.'
Thompson retired from 'Bell Labs' on December 1, 2000, and moved to California. He was a fellow at 'Entrisphere, Inc.' until 2006. He currently works at 'Google.'
Thompson Robert Griesemer, and Rob Pike, jointly wrote the 'Go' (also known as 'Golang') programming language.
In a 2009 interview, Thompson revealed to use a 'Linux'-based operating system.
In 1985, he became an elected member of the 'National Academy of Sciences' (NAS).
Thompson's acceptance speech after receiving the 'Turing Award,' titled 'Reflections on Trusting Trust,' presented the backdoor attack, which is now known as the ''Thompson hack'' and is widely regarded as a pivotal computer security work in its own right.
In 1990, the 'Institute of Electrical and Electronics Engineers' (IEEE) felicitated both Thompson and Ritchie with the 'IEEE Richard W. Hamming Medal' for developing 'Unix' and 'C.' They were inducted as ''Fellows of the Computer History Museum'' in 1997.
On April 27, 1999, the then-President Bill Clinton presented Thompson and Ritchie the 1998 'National Medal of Technology' for co-inventing the 'Unix' operating system and the 'C,' which have enhanced the American leadership in the information age.
In 1999, the 'Institute of Electrical and Electronics Engineers' awarded Thompson the first 'Tsutomu Kanai Award.' He shared the 'Japan Prize for Information and Communications' award with Ritchie in 2011.
Family & Personal Life
Thompson is married to Bonnie, and together they have a son, Cory.
Thompson is a licensed pilot and owns a plane.
You May Like

See the events in life of Ken Thompson in Chronological Order 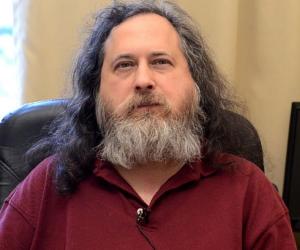