(Computer Scientist, Mathematician and One of the First Programmers of the ‘Harvard Mark I’ Computer)

Grace Murray Hooper was an American computer scientist, who was also responsible for developing the first compiler for computer programming language. Eldest among her siblings, Grace was a curious child and went to Hartridge School in New Jersey for preparatory education. She faced rejection from Vassar College for the first time, as she did not have satisfactory marks in Latin. She was accepted the following year, and graduated with her Bachelor’s degree in physics and mathematics. Two years later she earned her Master’s degree in the same discipline from Yale University. While persuing her PhD under Oystein Ore, she taught in Vassar College, where she earned the position of Associate Professor after ten years of service. During World War II, she joined navy and was commissioned as a lieutenant. She was assigned to the Bureau of Ordinance Computation Project in Harvard. After her naval duties ended, she joined Remington Rand, where she worked on UNIVAC. She became the director of automatic programming and sought to find specifications of common business language in computer leading to the discovery of COBOL or Common Business-Oriented Language. This was the first user-friendly computer software and Grace was responsible for advocating the validation process to bring international standardization of computer languages. Grace was born on December 9, 1906, in New York and was the oldest among her siblings. Her parents Walter Fletcher Murray and Mary Campbell Van Horne were of mixed (Scottish and Dutch) origin.

As a child Grace was curious and dismantled seven alarm clocks to understand its functionalities. She attended the ‘Hartridge School’ in New Jersey for preparatory education.

At the age of 16, she was rejected at Vassar College, because of insufficient marks in Latin. The next year, Grace was accepted and got her Bachelor’s degree in mathematics and physics, when she completed her graduation in 1928.

In 1930, she received her Master’s degree in mathematics from Yale University.

She then began research work for her doctoral degree simultaneously taking up a position as member of faculty at Vassar College�in 1931. Three years later she successfully obtained her PhD from Yale. 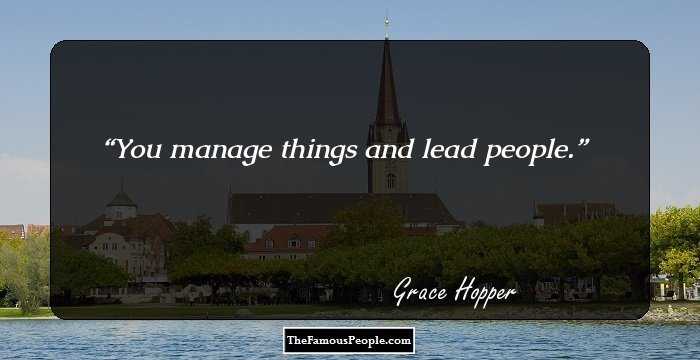 Continue Reading Below
Career
She worked in Vassar till 1943 when she joined United States Naval Reserve to serve her country during wartime. The following year Grace was commissioned as a lieutenant.
She was assigned a project of ‘Bureau of Ordinance Computation Project’ in Harvard presenting her the opportunity to work in the university’s ‘Cruft Laboratories’ on Mark computers.

In 1946, Grace resigned from Vassar to become a research fellow in Harvard’s computation laboratory. She took up the position in applied physics and engineering.

In 1949, Grace joined Eckert-Mauchly Corporation, where she�was given the position of senior mathematician.

This company was taken over by Remington Rand in 1950 and was merged with Sperry Corporation�after five years.

During her years in Remington Rand, she was in charge of the programming of UNIVAC. In 1952, her team created the first compiler for computers.

In 1959, at the ‘Conference of Data Systems Languages’, Grace Hopper was the technical consultant of the committee. She along with her colleagues defined COBOL�or Common Business-Oriented Language, which is till date one of the most famous business languages.

Grace took a leave from Sperry Corporation�in 1967, to serve in the navy. Later in the same year, she was called to service as a leader in ‘Naval Data Automation Command’.

For ten years after that, Grace Hopper was the ‘Director of Navy Programming Languages Group’.

In 1973, she was promoted to the position of Captain. During her years in navy, she was also called to create and standardize communication among different computer languages.

In 1986, Grace Hopper retired as a rear admiral;�she was the oldest serving officer in service. 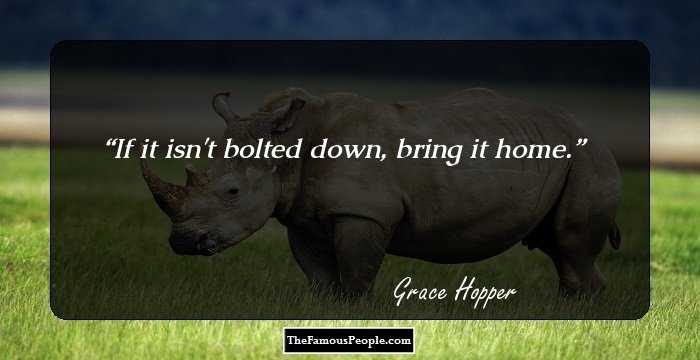 Quotes: Home
Major Works
Grace led the team which invented COBOL or Common-Business Oriented Language, one of the user-friendly computer software programs which can be used for business purpose. Though she did not invent the language, she definitely encouraged its adaptation.Awards & Achievements

In 2004, the University of Missouri honored Grace Hopper with a computer museum on its campus, Grace's Place. The museum has on display early computers and computer components.
�

In 2004, the University of Missouri honored Grace Hopper with a computer museum on its campus, Grace's Place. The museum has on display early computers and computer components.
�

Personal Life & Legacy
Grace was married to Vincent Foster Hopper but the couple divorced in 1945. They had no children.
On January 1st, 1992, the renowned computer scientist breathed her last, in Arlington, Virginia.
In her honour, the ‘Grace Hopper Celebration of Women in Computer Science’, a technical conference is organized which encourage women to be part of the computing world. She was an inspirational speaker who encouraged young people to learn programming.
A ‘Grace Murray Hopper Award’ is given in her honour by the ‘Association for Computing Machinery’. 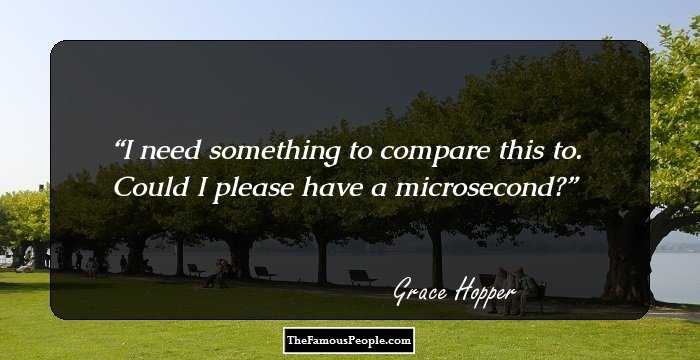 Trivia
For her distinguished work in the field of computers Grace was known as the ‘Amazing Grace’. She also earned the nickname Grandma COBOL for leading COBOL’s development.

Quotes By Grace Hopper | Quote Of The Day | Top 100 Quotes

See the events in life of Grace Hopper in Chronological Order