Advanced Search
Alan Curtis Kay is an American computer scientist best known for his pioneering work on object-oriented programming and windowing graphical user interface design. While at the ARPA project at the University of Utah in the late 1960s, he invented dynamic object-oriented programming. Working at Xerox PARC, his credo was, “the best way to predict the future is to invent it.” One of his visionary concepts was the Dynabook, a powerful and portable electronic device—the size of a three-ring notebook with a touch-sensitive liquid crystal screen and a keyboard for entering information. Laptops, notebook computers, and tablets have roots in the early concepts of the Dynabook. People needed a method for interacting with the new computer medium. To help with this, Kay and the members of his lab created graphical interfaces and the Smalltalk programming language. He is considered by some as the “father of personal computers” because he envisioned a small computing system in the 1970’s, long before notebook computers were available He is the founder-president of Viewpoints Research Institute, a non-profit organization dedicated to children and the One Laptop Per Child initiative. An important contributor to the Squeak project, he is part of the ongoing research called Etoys System. American People
Computer Scientists
American Men
Male Scientists
Taurus Scientists
Childhood & Early Life
Alan Curtis Kay was born in Springfield, Massachusetts. His father designed arm and leg prostheses, and his mother was a musician. He had read about 150 books before he started school.
He attended the University of Colorado at Boulder, earning a Bachelor's degree in Mathematics and Molecular Biology. Before and during this time, he worked as a professional jazz guitarist.
In 1966, he joined graduate school at the University of Utah College of Engineering, earning Master’s degree and a Ph.D. There, he worked with Ivan Sutherland, a pioneer in graphics programs including Sketchpad. 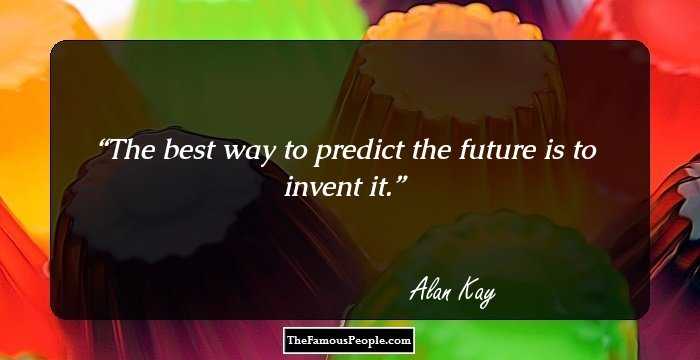 Quotes: Future
Continue Reading Below
Career
In 1968, Kay met Seymour Papert and learned of the Logo programming language, a dialect of Lisp. He created Logo as a tool to improve the way children think and solve the problems.
He studied the works of Jean Piaget, Jerome Bruner, Lev Vygotsky, and constructionist learning that believed individual learners construct mental models to understand the world around them.
In 1970, he joined Xerox Corporation's Palo Alto Research Center, PARC. and was one of the key members there to develop prototypes of networked workstations using the programming language Smalltalk used for constructive learning
He pioneered the idea of object-oriented programming (OOP) along with some colleagues at PARC and predecessors at the Norwegian Computing Center. C++, Objective-C, Smalltalk, Java, C#, Perl, Python, Ruby and PHP are examples of OOP.
Closely related to his Dynabook concept, he was actively involved in the One Laptop per Child project which aims at creating affordable educational devices for use in the developing world.
In 1984, he became an Apple Fellow at Apple Computer’s ATG (Advanced Technology Group), which researched in both hardware and software, and focused on such areas as Human-Computer Interaction, Educational Technology, and Language/action perspective.
Between 1996 and 2001, he was with Walt Disney Imagineering as a Disney Fellow. The Disney Fellow program intended to attract individual contributors of technology applicable to creative arts, media and entertainment.
In 2001, he started the Viewpoints Research Institute (VPRI), a nonprofit organization to improve "powerful ideas education" for the world's children and to advance the state of systems research and personal computing.
Kay worked with a team at Applied Minds, a company founded in 2000 by ex-Disney Imagineers, that provides technology, design, R&D, and consulting services to multiple firms. The company's headquarters are in Glendale, California.
Continue Reading Below
He became a Senior Fellow at Hewlett-Packard until HP disbanded the Advanced Software Research Team in 2005, a move that was criticized outside HP and created distrust within the company.
In 2005, at the World Summit on the Information Society, the MIT research laboratories unveiled a new laptop computer-the $100 Laptop, the Children's Machine, and the XO-1 -based on his Dynabook concept.
In 2006, his proposal titled, ‘STEPS Toward the Reinvention of Programming: A compact and Practical Model of Personal Computing, as a Self-exploratorium, to the United States National Science Foundation (NSF) was accepted and funds were sanctioned.
In 2011, he taught ‘Powerful Ideas: Useful Tools to Understand the World’, at NYU's Interactive Telecommunications Program to devise new forms of teaching/learning based on fundamental, powerful concepts, rather than on traditional rote learning. 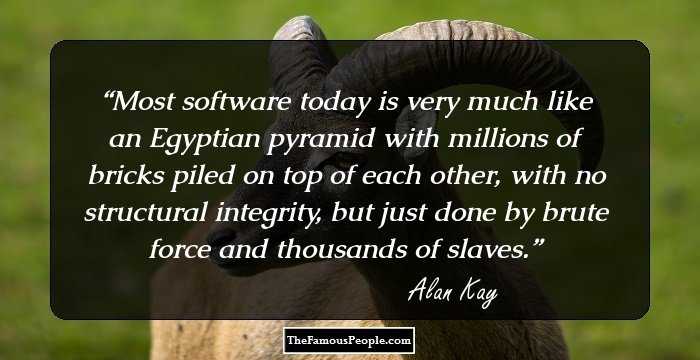 Quotes: Like
Major Works
Kay conceived the Dynabook concept by 1972 which laid the foundation for laptop and tablet computers and E-books. Thus, he is the architect of the modern overlapping windowing graphical user interface (GUI) and mobile learning.
Kay is an important contributor to the Squeak project and is part of the ongoing research called Etoys System, a Squeak based educational programming which is child friendly for use in education.
Awards & Achievements
In 2003, Kay was presented the ACM Turing Award for pioneering many of the ideas basic to contemporary object-oriented programming languages, leading the team that developed Smalltalk, and for fundamental contributions to personal computing.
He was the recipient of the Kyoto Prize similar in intent to the Nobel Prize, in 2004 and also shared the Charles Stark Draper Prize for Alto, the first practical networked computer. 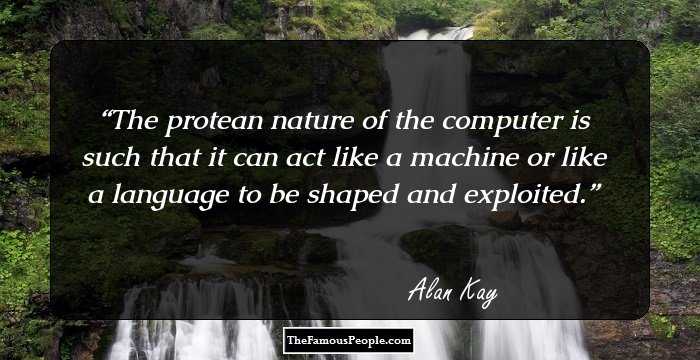 Quotes: Nature, Like
Personal Life & Legacy
Alan Kay married Bonnie Lynn MacBird in 1983. She is an actress, playwright, screenwriter and producer known for co-writing the science fiction film ‘Tron’ and has two Emmys for production to her credit.
Trivia
This American pioneering computer scientist said, “If you don't fail at least 90 percent of the time, you're not aiming high enough”.
The protagonist in the’ Tron’ movie is named Alan, and is fighting against the command-line oriented Master Control Program. This was a deliberate allegory of the life of this computer scientist.

See the events in life of Alan Kay in Chronological Order