Isaiah Berlin was a renowned British philosopher, social and political theorist, and a historian of ideas. Born in Livonia into a rich Russian Jewish family, he moved to England with his parents when he was twelve years old, quickly acclimatizing himself to the new environment, yet retaining his Russian Jewish identity. Proficient in Russian, English, German, Italian, Hebrew, Latin, and Ancient Greek, he spent his entire career at Oxford except for a few years during the Second World War. At the age of thirty, he published his first work, ‘Karl Marx: His Life and Environment', which was highly appreciated by scholars. However, he did not enjoy writing, and his published works were mostly produced from his conversational dictation to a tape-recorder, or through the transcription of his lectures and talks. In later years, his essays on various topics were collected in books like ‘Russian Thinkers’, ‘Concepts and Categories’, etc. He died in Oxford at the age of eighty-eight. David Icke
Philosophers #209
Non-Fiction Writers #99
Writers #646
DID WE MISS SOMEONE?
CLICK HERE AND TELL US
WE'LL MAKE SURE
THEY'RE HERE A.S.A.P
Quick Facts

British Celebrities
Non-Fiction Writers
British Men
Male Writers
Gemini Writers
Childhood & Early Life
Isaiah Berlin was born on 6 June 1909, in Riga, now the capital city of Latvia. At that time, it was an important city in Livonia, under the Russian Empire.
His father, Mendel Berlin, was the owner of one of the largest timber companies in the Baltic. His mother’s name was Marie née Volshonok. They were a lively cultured couple, and Isaiah, their only surviving child, showed great talent in music from his early childhood.
Isaiah spent the first six years of his life in Riga. In 1915, as the German Army began to close in around Riga, he moved with his family to Andreapol, where they had business interests.
In early 1917, the family moved to Petrograd (St Petersburg), where young Isaiah Berlin saw both the social-democratic and the Bolshevik Revolutions unfolding before his eyes. On one occasion, he saw a terrified man being dragged and kicked through the road, which left a deep mark on his young mind.
Identified as bourgeoisie, his family made the third move in five years, returning to Riga on 5 October 1920.But there too they were faced with anti-Semitism, and therefore, they decided to move to England, where his father had business connections.
By February 1921, they had settled down in Surbiton, a suburban neighborhood of south-west London, England. Here, he was enrolled at Arundel House Private School. Initially, he faced language problems, but very soon, he became proficient in English, winning the first prize for an essay.
After completing the prep school, he was enrolled at St. Paul’s School, where he was active in Junior Debating Society and the School Union Society. It was here that he underwent a systematic process of Anglicization, at the same time retaining his Russian Jewish identity.
After completing his schooling from St. Paul’s, he entered Corpus Christi College, one of the constituent colleges of the University of Oxford, for his degree in literae humaniores (Greats). The course focused on classical languages, ancient history, and philosophy.
In 1928, he graduated from CCC with first class honors, earning the John Locke Prize for his paper in philosophy. In the following year, he took a second degree, this time in PPE (philosophy, politics and economics), again graduating with first class honors from the same college. 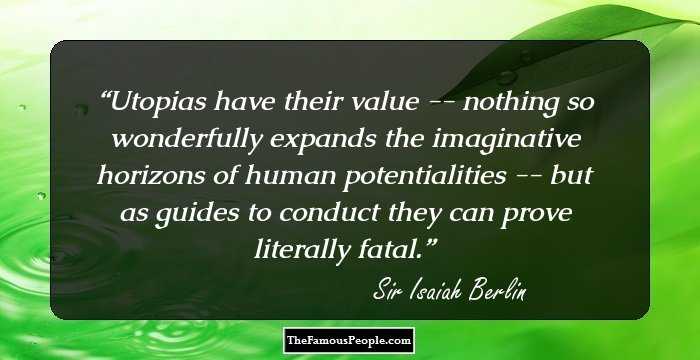 The Best Black Actresses Of All Time
Career
In 1932, after earning his degrees, Isaiah Berlin decided to study law. However, in the same year, he was offered his first post, a lectureship in philosophy, in New College, another constituent college under Oxford University. Almost immediately, he also received a fellowship at All Souls College, Oxford.
He served as a lecturer at New College till 1938, thereafter being elected a fellow at the same institution, serving in that capacity till 1950. Meanwhile in 1935, he earned his M.A. degree and published his first book, ‘Karl Marx: His Life and Environment', in 1939.
During the Second World War, he was exempted from his war duties, possibly because his left arm was damaged at birth. But in 1941, he was sent to New York by the Ministry of Information, before being transferred to Foreign Office in 1942.
From 1942 to 1946, Isaiah Berlin was attached mostly to the British Embassy in Washington, serving as the head of a team whose job was to report the political mood of that country. For a few months, he also served in Moscow.
The reports, which were mostly drafted by him, attracted the attention of Winston Churchill. A selection of them was also published in 1981 as ‘Washington Despatches, 1941-1945: Weekly Political Reports from the British Embassy’. 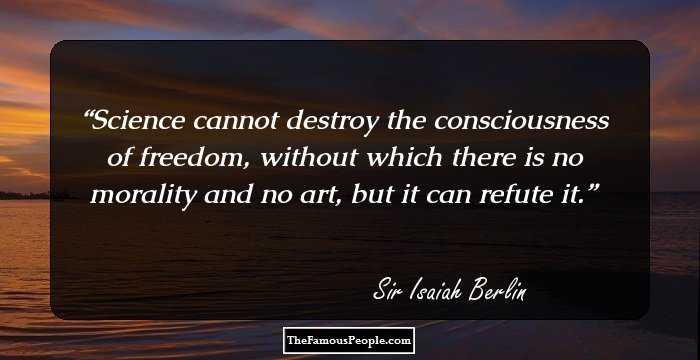 Quotes: Art
After Second World War
At the end of the Second World War, Isaiah Berlin returned to his academic life, continuing to teach at New College till 1950. Until then, he had worked mainly on analytical philosophy, but from now onwards he became more interested in political science, political theory, and intellectual history.
In 1950, he joined All Souls College, Oxford, remaining attached to it till 1966. During this period, he published several outstanding works, including 'The Hedgehog and the Fox: An Essay on Tolstoy's View of History' (1953), ‘Historical Inevitability’ and ‘The Age of Enlightenment: The Eighteenth-Century Philosophers’ (1956).
In 1957, Isaiah Berlin was elected as Chichele Professor of Social and Political Theory. On 31 October 1958, he gave his inaugural lecture as Chichele Professor. Titled ‘Two Concepts of Liberty’, it was later published as a pamphlet, and in 1969, it was included in his famous work, ‘Four Essays on Liberty’.
Continue Reading Below
In 1966, he became the founding president of Wolfson College, Oxford. Known until then as Iffley College, the institution did not have its own building. Berlin now set out to change that, securing the support of the Wolfson Foundation and Ford Foundation, renaming the college after the former.
In 1967, Isaiah Berlin relinquished his professorship at All Souls College and concentrated on his new project, serving as its president till his retirement in 1975. Concurrently, with teaching in England, he continued to serve as visiting professor in many distinguished American universities.
Major Works
Isaiah Berlin is best remembered for popularizing the concept of value pluralism, bringing it to the attention of the academicians. Also known as ethical pluralism or moral pluralism, it tries to establish that there are several values which may be equally correct and yet may conflict with each other. 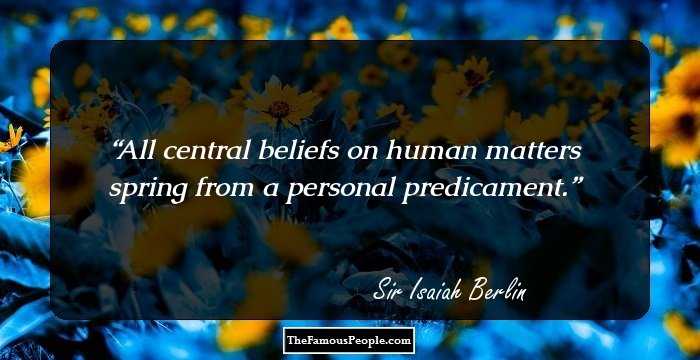 Awards & Achievements
In 1946, Isaiah Berlin was appointed a CBE. He was also knighted in 1957 and made a member of the Order of Merit in 1971.
From 1963 to 1964, he was the president of the Aristotelian Society and from 1974 to 1978, the president of the British Academy.
In 1979, he received the Jerusalem Prize for his defense of civil liberties.
In 1994, he received an honorary degree of Doctor of Laws at the University of Toronto.
Family & Personal Life
On 7 February 1956, Isaiah Berlin married Aline Halban (née de Gunzbourg), the ex-wife of his colleague, nuclear physicist, Hans Halban. The couple did not have any children of their own; however, from his wife’s previous marriages, he had three stepsons, Michel Strauss, Peter Halban, and Philippe Halban.
Berlin died on 5 November 1997, in Oxford, England. He was then eighty-eight years old and was survived by his beloved wife, Aline.
In 2009, a commemorative plaque was installed in Isaiah Berlin’s childhood home in Riga, Latvia.
Recommended Lists:
Intellectuals & Academics #477
You May Like

Quotes By Isaiah Berlin | Quote Of The Day | Top 100 Quotes

See the events in life of Isaiah Berlin in Chronological Order