(One of the Most Significant Philosophers of the French Renaissance)

Advanced Search
Michel Eyquem de Montaigne, Lord of Montaigne, was a French philosopher and writer best remembered for popularizing essays as a literary genre. He was born in the sixteenth century in southwestern France. Beginning his career in law at the age of twenty-one, he soon became well-known in the royal court, accompanying the king during the Siege of Rouen in 1562. When he was in his late 30s, he gave up his career, intending to lead a secluded life devoted to contemplation and writing. However, he was often called to the court to mediate in the religious war that was then raging across France. Yet, by the age of forty-seven, he completed and published two volumes of what is now known as his ‘Essais’. Later, he published a third volume consisting of thirteen essays. However, in his lifetime, he was admired more as a statesman than as an author. His tendency to merge his personal stories into serious intellectual insights and his declaration that he was the subject of his writing was not taken kindly by the readers of his time. Not long after his death, his books began to have immense influence on writers and thinkers, and today he is known as one of the most significant philosophers of his time. Auguste Comte
DID WE MISS SOMEONE?
CLICK HERE AND TELL US
WE'LL MAKE SURE
THEY'RE HERE A.S.A.P
Quick Facts

Cause of Death: Peritonsillar Abscess

French People
French Men
Male Philosophers
French Philosophers
French Intellectuals & Academics
Childhood & Early Life
Michel Eyquem de Montaigne, Lord of Montaigne, was born on 28 February 1533, at Château de Montaigne, his family estate located in a town now called Saint-Michel-de-Montaigne. Situated in the Nouvelle-Aquitaine region in southwestern France, the place is very close to the port city of Bordeaux.
His father, Pierre Eyquem, Seigneur of Montaigne, was a French Catholic soldier. After briefly serving in the army of King Francis I, he gave up this profession, subsequently becoming the mayor of Bordeaux. His mother Antoinette López de Villanueva was from a wealthy Marrano family.
Born the third of his parents’ eleven children, Michel was the eldest surviving child. His younger siblings were Thomas de Montaigne, seigneur de Beauregard; Pierre de Montaigne, seigneur de la Brousse; Arnaud de Montaigne; Jeanne de Montaigne; Léonore de Montaigne; Marie de Montaigne; Bertrand de Montaigne and Madeleine Eyquem de Montaigne.
Soon after his birth, Michel was sent to live with a peasant family so as to develop a close bond with the ordinary people. Thus, for the first three years of his life, he lived among the peasants, returning home possibly at the beginning of 1536.
Once Michel was brought home, his father started executing his next set of plans. Each morning, the boy woke up to the sound of soft music.
His father hired Latin-speaking servants, who were ordered to speak to him only in that language, so that young Michel learned it as his first language. Family members were also instructed to do the same. For his academic training, his father hired Horstanus, a German doctor, who spoke no French.
His father also tried to teach him some Greek through games, conversation and other similar methods. Thus, until the age of six, Michel did not know even a single word in French but could converse fluently in Latin.
In 1539, Michel was enrolled at Collège de Guyenne, a boarding school in Bordeaux. Here, he came under the direct supervision of excellent teachers like Nicholas Grouchy, George Buchanan and Marc Antoine Muret.
At the age of seven or eight, he developed an avid interest in reading when he came across the stories from Ovid’s ‘Metamorphoses’. Over a period of time, he began to read Virgil’s ‘Aeneid’ and then moved to the works of Roman playwrights like Publius Terentius Afer and Titus Maccius Plautus.
In 1546, Michel finished his schooling, after which his father sent him to study law either at Toulouse or at Paris; different biographers having different views on this. 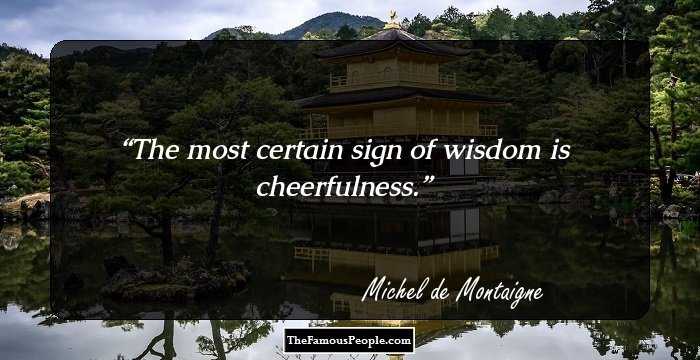 Continue Reading Below
Early Career
Possibly in 1554, Pierre Eyquem bought his eldest son a position in the Court des Aides of Périgueux, where young Michel de Montaigne began his career as a counselor. Here, he became a member of the ‘Board of Excise’, serving in that capacity until it was dissolved in 1557. The fact that he could speak fluently in Latin became a bonus point that boosted his career.
In 1557, at the age of twenty-four, Montaigne was appointed counselor of the Parlement in Bordeaux, one of the eight high courts that made up the highest court of justice. Initially, he found it difficult to establish himself because counselors from Court des Aides were not generally given any importance.
Also in 1557, he met Etienne de La Boëtie, the noted humanist and author. Born in 1530, he was a little older than Montaigne, but had already established himself as a distinguished civil servant at the Parlement of Bordeaux. Very soon, the two men became very close, both intellectually and emotionally.
By 1560, Montaigne was able to establish himself at the Parlement of Bordeaux, securing the respect of his colleagues. Very soon, he started volunteering for different jobs, regularly visiting the Royal Court although initially as a courier or a subordinate, becoming familiar with its functioning and traditions.
In 1561, he was appointed a courtier at the court of Charles IX, a position he held until 1563. Meanwhile, as the Siege of Rouen took place from September 28 to October 26, 1562, he was chosen to accompany the king.
In 1563, La Boëtie died of dysentery, creating a void that remained with Montaigne for the rest of his life. Much later, in his essay on friendship, Montaigne had described his friendship with La Boëtie as “perfect,” far superior to any other relationship.
Around 1565, he also began to translate Raymond Sebon’s ‘Theologia naturalis’ at his father’s request, finishing the work before the latter’s death in 1568. The book was printed in the following year. 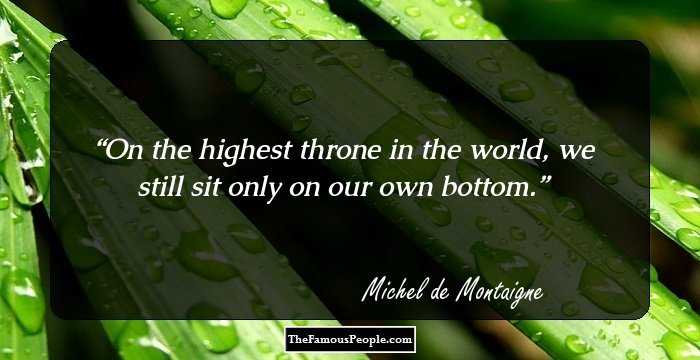 Abandoning Civil Service
By the time Pierre Eyquem had died in 1568, Montaigne had become disillusioned with his country’s judicial system, which had become a tool in the hands of the nobility. He had remained with the profession simply because his father had wished to see him established as a civil servant.
Continue Reading Below
As the eldest surviving son, he inherited his father’s estate after his death, becoming the Lord of Montaigne. He now had neither the necessity nor the will to continue with his profession.
In 1570, he sold his seat in the Parlement of Bordeaux and then concentrated on publishing his friend, La Boëtie’s works, together with his dedicatory letters. Concurrently, he had the tower at the Château de Montaigne extensively renovated so that it would serve as his sanctuary.
Author & Statesman
In 1571, Montaigne moved to the Château de Montaigne, where he led a secluded life in the tower, away from family and friends. Sitting alone in his room, lined with 1500 books, he now began to write his ‘essais’, which in French means ‘attempt at conciliation.’
Many critics believe that he began writing to fill up the void left by the death of La Boëtie. His essay, ‘On Friendship’, written during this period, was a tribute to him. In 1580, he published the first two volumes of his works, consisting of fifty-seven and thirty-seven chapters, respectively.
Although he spent most of his time between 1571 and 1580 writing, his seclusion was not complete. He was not only obliged to supervise the running of his estate, but also had to leave his sanctuary from time to time, traveling to Paris to attend the royal court.
Other than writing, one of his most important works of this period was to mediate in the religious conflicts. Although he was himself a Catholic, both the Roman Catholic King Henry III and the Protestant King Henry of Navarre had faith in him.
In 1580, he set out on a trip, visiting various parts of France, Germany, Switzerland and Austria before he settled at Bagni di Lucca in Italy, keeping a detailed journal of his travels. His main intention was to cure the stones in his kidney by having baths in hot springs.
While in Italy, he also visited Basilica della Santa Casa in Loreto, where he presented a silver relief depicting himself and his family. In Vatican, the Master of the Sacred Palace scrutinized his works and possibly reprimanded him for writing favorably about heretic poets and referring to pagan notions like ‘fortuna’.
In the fall of 1581, while in Lucca, he got the news that he had been elected mayor of Bordeaux. Initially, he was reluctant to take up the offer because of his own ill-health and the country’s political condition. Later, he accepted the position on King Henry III’s request.
Continue Reading Below
From 1581 to July 1585, Montaigne served as the city’s mayor for two consecutive terms. Although his first term was quite tranquil, the hostilities between the Catholics and Protestants intensified after his reelection in 1583 and he often had to mediate in order to keep peace.
In spite of his official responsibilities, he continued with his literally pursuits, revising the essays of his first two books and also writing thirteen essays for the third volume during this period. However, increasing hostilities and outbreak of plague in and around Bordeaux impaired his speed.
In 1586, the renewed outbreak of plague in his area forced him to move. He now lived in Paris for some time, continuing with his diplomatic duties. Possibly in 1587, he negotiated unsuccessfully with Henry of Navarre on behalf of Catherine de Médicis. In the same year, he finished his third book of essays.
In 1588, he once again traveled to Paris. On 10 July, while he was on his way to the city, he was arrested by the members of the Protestant League for his loyalty to Henry III, a Catholic. However, he was freed on the same day.
Also in 1588, he had his third book, containing thirteen new essays, published. In addition, he also had his first two books republished with many additions and revisions. While in Paris, he met Marie de Gournay; she would later become his literary executer, editing and publishing his works after his death.
In 1589, King Henry III was assassinated and with that, Montaigne once more became politically active, helping to keep Bordeaux loyal to Henry of Navarre, who would become King Henry IV. After this, he lived for three years only, revising essays, reading and contemplating on life. 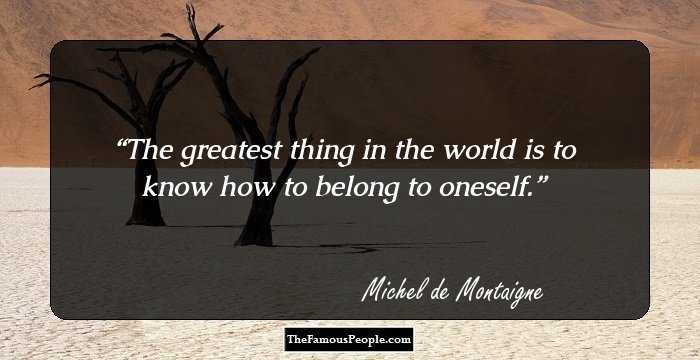 Major Works
Montaigne is best remembered for his three volumes of ‘Essais’. Written over a period of twenty-one years, they cover a wide range of topics. Although his stated goal was to describe himself, the modernity of his thoughts made them the most significant works in French philosophy until the eighteenth century.
Family & Personal Life
In 1565, Montaigne married Françoise de la Cassaigne, who came from a rich mercantile family. They shared an amiable but calm relationship, reflecting his belief that passionate love was detrimental to freedom.
The couple had several children, but all of them except his daughter Léonore died in infancy. Montaigne also considered Marie de Gournay, a writer in her own right, his adopted daughter.
In 1592, he developed quinsy, an inflammation of tonsils, which took away his ability to speak. On 13 September, he requested for a mass and died while listening to it.
Initially, he was buried somewhere near his home. Later, his remains were exhumed and moved to the now-destroyed church of Saint Antoine at Bordeaux. It now lies buried at the Église de Foeuillens, Bordeaux.
Université Michel de Montaigne Bordeaux, the humanities branch of the University of Bordeaux, has been named after him.
’Château de Montaigne’ has been listed as a “monument historique” by the French Government since 2009. The commune, in which the chateau is situated, has also been named Saint-Michel-de-Montaigne after him.
Although the original structure of ’Château de Montaigne’ was rebuilt after it was destroyed in 1885, the Montaigne’s Tower, where he wrote his famous essays, has remained intact. In 1952, it was classified as a “monument historique.”