George R. R. Ma...
Oliver Wendell Holmes, Sr. was an American poet, author, physician, medical reformer, professor and lecturer. He is noted for his oratory and literary skills. The ‘Breakfast-Table’ series remained his most distinguished prose work that gained him international fame. He was a member of ‘Fireside Poets’ along with the likes of Henry Wadsworth Longfellow and John Greenleaf Whittier among others. The writings of the American ‘Fireside Poets’ were considered conventional and family friendly and were among the first few to gain immense popularity in Europe. He was respected and acclaimed by his peers for his works and also earned international appreciation all his life. Based in Boston, he advocated the city’s culture and his writings often reflected a Boston-centric view. That is why many a times he is referred as ‘Boston Brahmin’. This term was originally coined by him to refer oldest and intellectual families of Boston. He considered Boston was ‘’ the thinking centre of the continent, and therefore of the planet”. He practiced as a physician and served as a professor of physiology and anatomy at the ‘Harvard University’. He was one of the founder-editors of the journal ‘Atlantic Monthly’. Apart from poetry he penned down novels, table-talk books, travelogues, biographies and medical treatises as well. He wrote on a wide range of subjects including theology, medicine, psychology, democracy and society. Essayists
American Men
Harvard University
Male Writers
Childhood & Early Life
Oliver Wendell Holmes, Sr. was born on August 29, 1809 in Cambridge, Massachusetts to Reverend Abiel Holmes and his second wife Sarah Wendell. His father an enthusiast in history was a minister of the ‘First Congressional Church’ and his mother was the daughter of a wealthy merchant.
Since childhood he suffered from asthma. He was considered a bright and talented boy. He used to visit his father’s library often and explored the writings of the likes of Oliver Goldsmith and John Dryden. He wrote his first poem at thirteen.
He was taught by William Bigelow and Dame Prentiss and was later enrolled in the ‘Port School” in Cambridgeport. His teachers often scolded him for reading stories at school.
At fifteen Oliver Wendell Holmes, Sr. was sent to ‘Phillips Academy’ in Andover in Massachusetts by his father who wanted Holmes to follow his footsteps. The academy was renowned for its traditional Calvinist teachings but Oliver Wendell Holmes, Sr. did not want to be a theologian and thus did not savour the year he spent at the academy.
At sixteen he joined the ‘Harvard College’ and completed his graduation in 1829.
He served as Secretary and Poet at the ‘Hasty Pudding’ and was also elected to the ‘Phi Beta Kappa’ honour society.
After graduating, he studied at the ‘Harvard Law College’ for a short while but later decided to pursue medicine and went to ‘Boston Medical College’.
In 1833 he went to Paris and studied in renowned medical schools for a while. He was among the first Americans who received training of the new ‘’clinical’’ procedure at the ‘École de Médecine’.
He went back to Harvard and completed MD from ‘Harvard Medical School’ in 1836. He was among twenty students who received ‘Deturs’ a scholastic honour when he was in the second year. 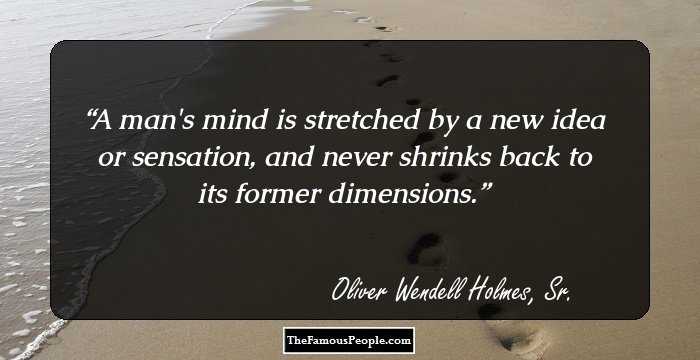 Virgo Writers
Male Novelists
American Writers
American Essayists
Career
In 1830, he penned down many poems of which he gave twenty five to ‘The Collegian’ a publication formed by his Harvard friends. Four of these were counted among his best writings. His other poem ‘The Last Leaf’ was considered as one of his finest works. Abraham Lincoln was all praise about the poem.
His two essays under the title ‘The Autocrat of the Breakfast-Table’ were published by the ‘New England Magazine’ in November 1831 and in February 1832 detailing life as observed from his boarding’s breakfast table. The two essays came out to be one of his most finest and popular works.
Post his graduation he joined ‘Boston Medical Society’, ‘Boston Society for Medical Improvement’ and ‘Massachusetts Medical Society’.
In 1837, he won the ‘Boylston Prize’ from the ‘Harvard Medical School’ after placing a paper on the benefits of stethoscope. Thereafter, he joined the ‘Boston Dispensary’. He and his peers set up the ‘Tremont Medical School’ in Boston which was afterwards merged with the ‘Harvard Medical School’.
In 1838, he became a Fellow of the ‘American Academy of Arts and Sciences’.
From 1838 to 1840 he remained a professor of ‘Dartmouth Medical School’ and taught physiology and anatomy.
In 1842, his essay ‘Homeopathy and Its Kindred Delusions’ condemning the subject was published.
He created the term ‘anaesthesia’ in 1846 and suggested it to dentist William T. G. Morton who for the first time would apply ether publicly while conducting surgery.
From 1847 to 1853 he remained the dean of ‘Harvard Medical College’ and also served as a professor of anatomy and physiology till 1882.
Continue Reading Below
He regularly contributed to ‘The Atlantic Monthly’. His two essays in the series ‘The Autocrat at the Breakfast-Table’ that he re-produced for the magazine were appreciated by both readers and critics resulting in a sale of 10,000 copies of the magazine in just three days.
In 1860, he invented a hand stereoscope where pictures can be viewed in 3-D form but did not patent it to garner profit.
In 1884, he toured Europe with his daughter Amelia and met several renowned writers. He was awarded honorary doctorates by Cambridge, Oxford and Edinburgh Universities.
Yale University awarded him an honorary degree in 1886.
Some of his other writings include ‘The Professor at the Breakfast-Table’ (1860), ‘Elsie Venner’ (1861), and ‘Mechanism in Thought and Morals’ (1871) and ‘The Poet at the Breakfast-Table’ (1872) 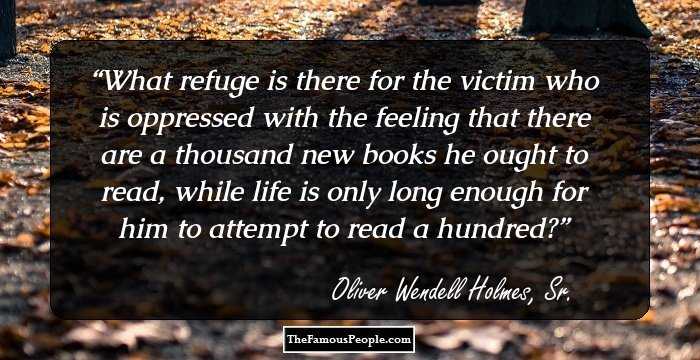 American Novelists
Virgo Men
Major Works
He wrote a patriotic poem, ‘Old Ironsides’ which was published in the ‘Boston Daily Advertiser’ on September 16, 1830 opposing the dismantling and scrapping of the 18th century old Navy frigate ‘USS Constitution’. The poem garnered national attention and brought him praise resulting in preserving of the historic ship.
His essay ‘The Contagiousness of puerperal fever’ published in 1843 and re-published in 1855 as ‘Puerperal Fever as a Private Pestilence’ was considered one of his remarkable and revolutionary contributions to medical science and its practices.
Personal Life & Legacy
On June 15, 1840 he married Amelia Lee Jackson who was the daughter of Justice Charles Jackson at King’s Chapel in Boston. The couple had three children - Amelia Lee Jackson, Edward Jackson Holmes and Oliver Wendell Holmes who was an officer of Civil War and an American jurist. His wife died on February 6, 1888.
He died on October 7, 1894 while in sleep. He was buried in the ‘Mount Auburn Cemetery’ in Cambridge, Massachusetts beside his wife. 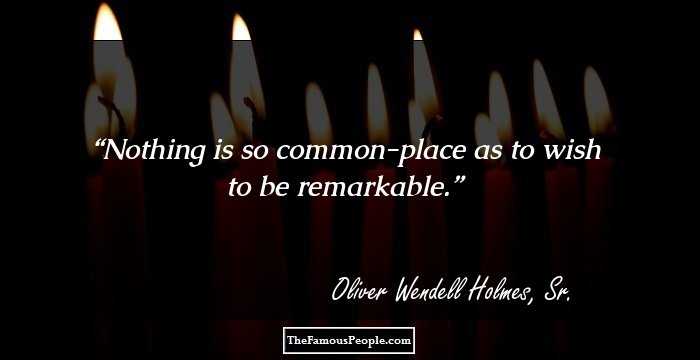 Trivia
He was often requested to write poems commemorating special occasions such as birthdays and anniversaries.
The library of the Phillips Academy where he studied was named after him as ‘Oliver Wendell Holmes Library’. A special section of the library is dedicated for songs, poems, essays and medical papers collected from his personal library.
In 1915, the locals of Boston built a memorial seat and placed a sundial near his last house in such a position which is visible from his library.
A memorial tablet inscribed with his achievements was built at the King’s Chapel, Boston, as a mark of honour.
You May Like

See the events in life of Oliver Wendell Holmes, Sr. in Chronological Order