Alice Walker is a Pulitzer Prize-winning African-American writer best known as the author of the critically acclaimed novel’ The Color Purple’ which tells the story of a black woman who struggles against not just the racist white culture but also the patriarchal black culture. An independent minded woman and a feminist, Walker is famous for her works which address the issues of gender discrimination, racism, and patriarchy which are rampant in the African-American society. She was born as the youngest daughter of sharecroppers and grew up in poverty. In mid-20th century America’s black children were expected to work in the fields instead of going to school. However, her mother was a strong-willed woman who insisted that her children receive a good education and sent Alice to school. She was a creative girl and started writing at a young age. After high school she went on a scholarship to Spelman College in Atlanta. During this time she became influenced by one of her professors, Howard Zinn, who was also an activist and grew interested in the U.S. civil rights movement. She became a published writer while still in college and over the years established herself as a major author of the Black Arts movement. She is also a prominent social activist in addition to being an acclaimed writer. American People
Poets
Novelists
Short Story Writers
American Women
Childhood & Early Life
Alice Walker was born in Putnam County, Georgia, on February 9, 1944. Her parents, Willie Lee Walker and Minnie Lou Tallulah Grant, were sharecroppers. She was the youngest of eight siblings.
Even though the family was poor, her mother worked hard to ensure that the children received a good upbringing. She worked as a maid to supplement the family income.
Alice grew up in an era when the children of black sharecroppers were expected to work in the fields at a young age. But her mother was insistent that her children receive a decent education and enrolled Alice in school when she was four years old.
She was a creative little girl and started writing when she was just eight years old.
She was accidentally wounded in the right eye in 1952 and a layer of scar tissue formed over her wounded eye. Because of this she became very self-conscious and shy. The scar tissue was later removed when she was 14.
She graduated from her high school as the valedictorian of her class, and won a scholarship to attend the Spelman College in Atlanta in 1961. She later transferred to Sarah Lawrence College, graduating in 1965.
In Spelman College, one of her professors, Howard Zinn, was also an activist and he greatly influenced her thinking. Because of him, she became interested in the U.S. civil rights movement and soon became an activist in her own right.
She wrote her first volume of poetry, ‘Once’ in 1968 while still in college. The poems are based on her experiences during the civil rights movement. The influence of the French philosopher Albert Camus is also evident in her early work. 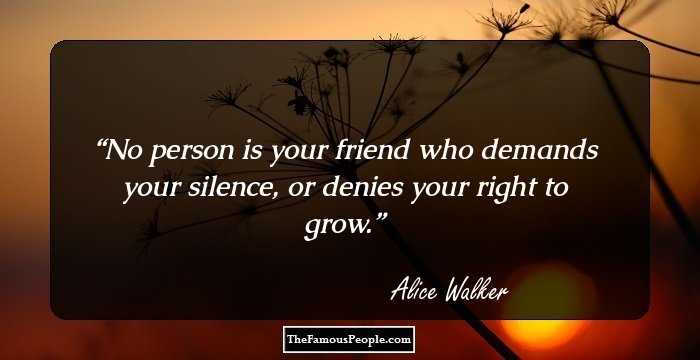 Continue Reading Below
Career
In 1968, Alice Walker accepted the position of a writer in residence at Jackson State College and moved to the Tougaloo College in 1970. Later on she became a consultant in black history to the Friends of the Children of Mississippi Head Start program.
She released her debut novel, ‘The Third Life of Grange Copeland’ in 1970. Set in rural Georgia, it traces the story of a poor sharecropper named Grange, his wife, their son, and grand-daughter.
In 1976, her novel ‘Meridian’ was released. It tells the story of a student named Meridian Hill who becomes active in the Civil Rights movement. Many believed that the novel was a critique of the path that the Civil Rights Movement had taken in the 1960s and 1970s.
The year 1982 saw the release of the novel that would make her a world renowned author. ‘The Color Purple’, which revolves around the story of Celie, a poor, uneducated, fourteen-year-old black girl living in the American South, explores the issues of sexism and racism that African American women are subjected to.
Her novel, ‘The Temple of My Familiar’ was out in 1989. It is a multi-narrative novel containing the interleaved stories of different characters, each of whom is searching for vital elements in their pasts.
Along with being an acclaimed novelist Alice Walker is also a famous poet, and her poetry collections include ‘Horses Make a Landscape Look More Beautiful’ (1985), ‘Her Blue Body Everything We Know: Earthling Poems’ (1991), ‘Absolute Trust in the Goodness of the Earth’ (2003), ‘A Poem Traveled Down My Arm: Poems And Drawings’ (2003), and ‘Collected Poems’ (2005). 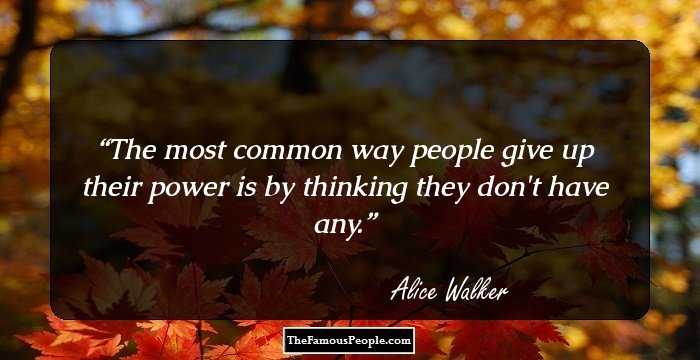 Quotes: Power
Major Works
The novel ’The Color Purple’ is undoubtedly the best known of her literary creations. Set in rural Georgia, the story focuses on the miserable quality of life of African-American women in the southern United States in the 1930s. The book was highly acclaimed and earned her several prestigious awards. It was later adapted into a film and musical of the same name.
Awards & Achievements
Alice Walker won the Pulitzer Prize for Fiction in 1983 for the novel ‘The Color Purple’. She also received the National Book Award for Fiction for the same book.
She was named the "Humanist of the Year" by American Humanist Association in 1997.
She is also the recipient of the Lillian Smith Award from the National Endowment for the Arts and Rosenthal Award from the National Institute of Arts & Letters. 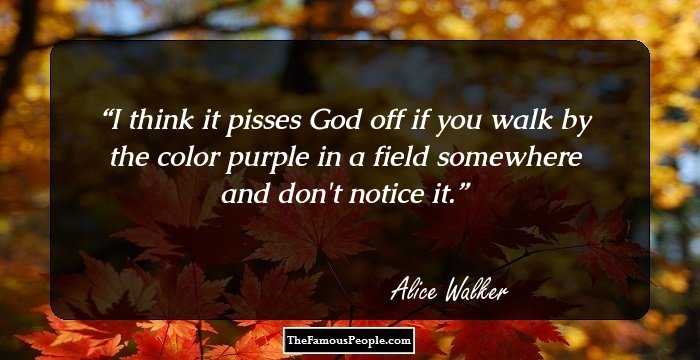 Quotes: You, Think, God, I
Personal Life & Legacy
Alice Walker met Melvyn Rosenman Leventhal, a white Jewish civil rights lawyer, in 1965. The couple fell in love and married in 1967. They often faced harassment as they were an inter-racial couple. They had one daughter, born in 1969. The marriage ended in a divorce in 1976.
She was involved in a romance with singer-songwriter Tracy Chapman in the 1990s.
Recommended Lists:
Writers #375
Activists #110

Quotes By Alice Walker | Quote Of The Day | Top 100 Quotes

See the events in life of Alice Walker in Chronological Order