Saul Williams is a man of many talents. A poet, writer and actor, he is undoubtedly an extremely gifted person. He realized very early in life that performing arts was his calling and so he fine-turned his education accordingly. He came to be noticed first as a poet, and then went on to act in movies. He collaborated with many popular hip-hop musicians, writing lyrics for their albums and accompanying them on tours. Soon, he was making his own music. The lyrics of his music were based on poetry written by him. Thus, he was able to bring about a union of two art forms never attempted before. His works are thought provoking and deal specifically with the life of African-Americans. He is true to himself and whatever he creates is invariably original and soulful. He is open to international influence and has collaborated with musicians from India, Mali, Turkey, Senegal and Congo and as a result, he has given a refreshing angle to contemporary music. Like many other musicians, he has relied on the internet to make his music available. He has put his celebrity status to good use, championing many causes close to his heart especially raising his voice against the war on terrorism and joining in efforts for socio-economic equality. 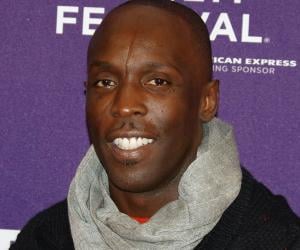 American People
Black Poets
Musicians
Black Writers
Black Singers
Childhood & Early Life
Saul Stacey Williams was born on February 29, 1972, in Newburgh, New York. His father was a preacher in a Baptist church and traveled a lot, and his mother was a school teacher.
He completed his high school education from Newburgh Free Academy and graduated with a degree in acting and philosophy from Morehouse College. He then joined the prestigious Tisch School of Arts for a MFA in Drama. 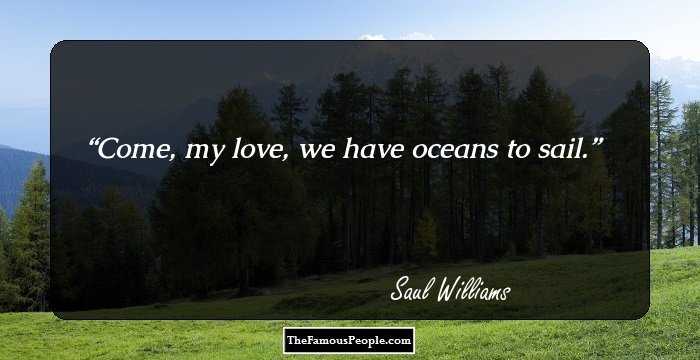 The Hottest Male Celebrities With The Best Abs
Career
Soon after he started writing poetry, he won the Nuyorican Poets Cafe's ‘Grand Slam Championship’ in 1996.
He played a key role as an actor and writer in the film, ‘Slam’, released in 1998. The film is about a young African-American man whose talent for poetry is disadvantaged by his social background.
In 1998, he began performing with artists such as Christian Alvarez, Nasir bin Olu Dara Jones popularly called Nas, an American rapper, Blackalicious, a hip-hop duo, and Sonia Sanchez of the Back Arts Movement.
In 2001 he released the LP ‘Amethyst Rock Star’, produced by Rick Rubin. Three years later, he released a much acclaimed self-titled album.
He featured on several shows supporting ‘Nine Inch Nails’, an American industrial rock project founded by Trent Rezno. He also accompanied them on their European tour in 2005.
He supported ‘The Mars Volta’, a rock band from Texas consisting of Rodriguez Lopez, Cedric Bixler-Zavala, Juan Alderete, Marcel Rodriguez-Lopez and Deantoni Parks, known for their energetic live shows.
Invited to the annual Lollapalooza music festival that sought to provide a platform to popular rock, heavy metal, punk rock and hip hop bands, he was able to perform for a wider audience.
He featured in the Nine Inch Nails’ album, ‘Year Zero’, released in 2007 and extended his support to the band for their tour of North America. The album criticized the contemporary policies of the U. S government.
He released the album, ‘Volcanic Sunlight’, in 2011. It embraced a dance pop style and contained the original sound track of the Bollywood film, ‘Khuddar’, composed by Rajesh Roshan and sung by Kishore Kumar.
Continue Reading Below 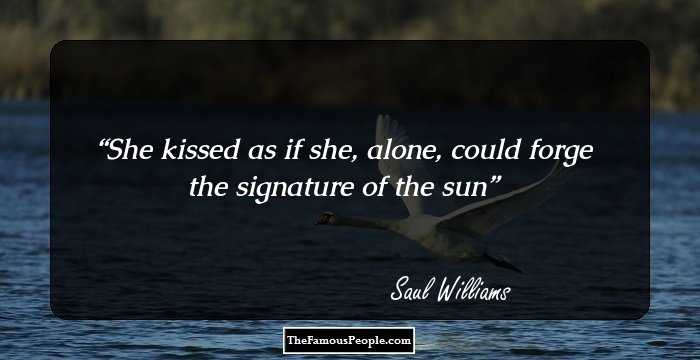 Quotes: Alone
Major Works
Saul William’s album, ‘The Inevitable Rise and Liberation of Niggy Tardust!’ released in 2007, was based on lyrics adapted from his poems and was promoted by Trent Reznor. Initially available only on the internet, 154,449 people downloaded it.
In 2009, ‘NGH WHT – The Dead Emcee Scrolls with The Arditti Quartet’, was released which is a reading based on his book of poems, conducted by Thomas Kessler and performed by the Arditti String Quartet. It continues to attract paid downloads.
Awards & Achievements
Williams won his first significant award in 1998, when he won the ‘Gotham Awards’ in the ‘Breakthrough Award’ category. The awards are presented annually to independent film makers at a ceremony in New York.
In 1999, he won ‘The Independent Spirit Award’, in the ‘Best Debut Performance’ category, for the film, ‘Slam’. The movie went on to win the ‘Sundance Festival Grand Jury Prize’ and the ‘Golden Camera at Cannes’. 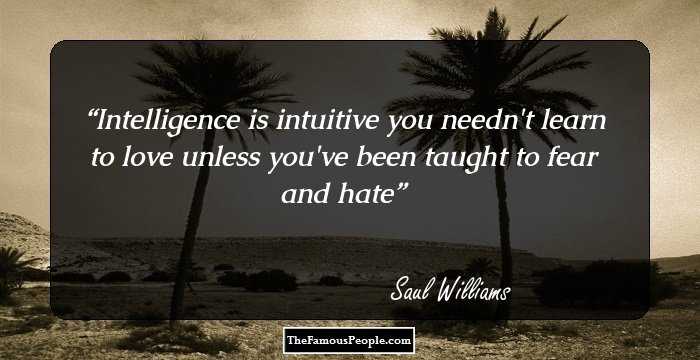 Quotes: Fear
Personal Life & Legacy
Saul Williams has a daughter, Saturn, from his relationship with Marcia Jones, an artist. He married actress Persia White in 2008, but they separated a year later.
He is a vocal critic of the war on terrorism, and his work ‘Not in My Name’, is an anti-war anthem. He is a signatory of the ‘Occupy Movement’, protesting social and economic inequality.
Trivia
This poet, singer, actor attributed his poetic talent as, “My father's a preacher, my mother's a teacher, thus I rhyme”.
This famous poet cum singer’s mother was rushed from a James Brown Concert to give birth to him.
Recommended Lists:
Musicians #2923
Singers #3365
You May Like

Quotes By Saul Williams | Quote Of The Day | Top 100 Quotes

See the events in life of Saul Williams in Chronological Order