(One of the Leading 19th-Century American Poets)

Emily Dickinson is hailed as one of the most prolific American poets of all time. Her legendary poems, such as Because I could not stop for Death, Success is counted Sweetest, and plenty others, have not only found a place on the shelves of major libraries, but have also occupied a convenient spot in the syllabi of eminent universities. It is odd that even though she possessed such articulate written skills, she lived her life in solitude and hardly interacted with family and society. Those who have read her poetry would testify to the fact that most of her greatest works reflect a serene, melancholic spirit. She not only wrote 1100 poetries in her youth, but also wrote hundreds of letters that mirrored unblemished compositions of finest literary work in the history of American Literature. Gifted with the art of weaving sentiments into words, it was unfortunate that her work was largely published posthumously as a result of her isolation; her contemporaries did not have much knowledge of the tremendous literary abilities she possessed. Her poems have been appreciated for her irregular use of punctuation and uncustomary capitalization of letters, with brief lines bearing profuse meaning. Joyce Carol Oates
DID WE MISS SOMEONE?
CLICK HERE AND TELL US
WE'LL MAKE SURE
THEY'RE HERE A.S.A.P
Quick Facts

Emily Elizabeth Dickinson was born on 10 December 1830 in Amherst, Massachusetts, into a literate, respectable, and prominent family. Her grandfather, Samuel Dickinson, was the founder of the reputed Amherst College.

Emily Dickinson was born to the learned lawyer and trustee of Amherst College, Edward Dickinson, and Emily Norcross, a former student of Monson Academy. Emily was named after her mother. She lived with her parents and two siblings: her elder brother William Austin and her younger sister Lavinia Norcross.

The family moved to Pleasant Street after the birth of Lavinia in order to accommodate Edward’s prospering political and legal career and for providing a bigger house for his children.

Edward wanted to provide his children with refined education. The education catered to Emily was not one that was usually provided to girls during the Victorian age. She received classical education that only the elite could afford.

Emily went to a primary school in Amherst before she was enrolled at the Amherst Academy. Along with being a brilliant and observant student, she also took keen interest in piano and domestic chores, especially gardening.

After receiving seven years of formal education in Amherst Academy (1840), she began her education at Mount Holyoke Female Seminary in 1847. For the first time, she had to spend a year away from her family.

Emily Dickinson was cheerful and had plenty of female friends as a young girl, some of them were Abiah Root, Abby Wood, Emily Fowler, Susan Gilbert (who later married her brother William), and her best friend and cousin Sophia Holland.

She also had a couple of male friends, such as Benjamin Newton and Henry Vaughn Emmons. But she never showed any affection beyond friendship towards any of these male friends.

But what turned events for Emily was the sudden death of Sophia Holland; she was so shaken by the incident that she had to be sent away to Boston to recover from the trauma.

The death of Sophia brought many questions of death and mortality to the mind of young Emily. The fact that the backyard of her house faced a cemetery added to her morbid fascination with death. Thus, it is presumed that the loss of her loved ones inflicted on her mind the pain of mortality, on which she later wrote several poems. 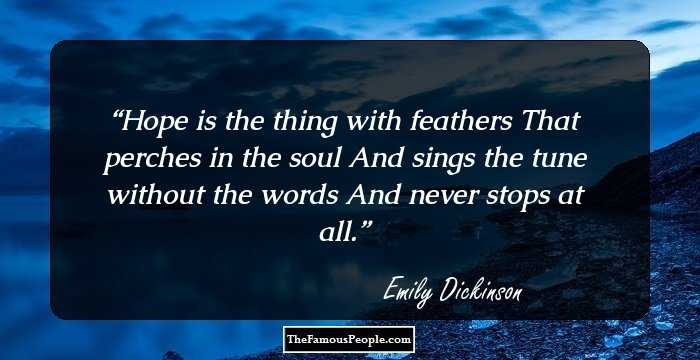 Benjamin Franklin Newton, a student of Edward Dickinson and Emily’s tutor, had deep regard for her and introduced her to the work of William Wordsworth. In 1848, he gifted Emily the collected works of Ralph Waldo Emerson, that she described as written to “touch a secret spring.”

When she was 20, she read everything from The Holy Bible to contemporary literature. She wrote a letter to her brother, in which she expressed her growing interest and desire to write. She also referred to the aspect of individuality and stressed on how different she felt from others. 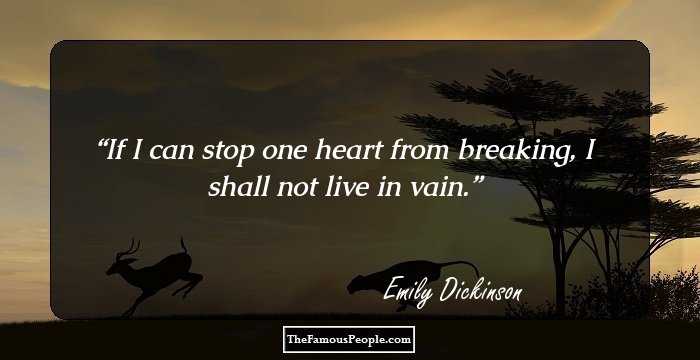 Quotes: Heart, I
A Poet & Essayist

The years from 1858 to 1865 saw a steady leap in her work. She based her writings, especially her poems, on a few themes; she wrote several poems on nature and flora; some ballads venerating a “Master” or “Sire” that was conjectured to be her love; gospel poems based on the parables of the Bible; and poetry on death and mortality.

Her family moved back to their homestead, and her brother married Susan and had three children. Susan, now a mother, had to devote the bulk of her time to her children, slowly creating a gulf between herself and Emily Dickinson.

Soon after, her mother developed a chronic illness. Hence, Emily took on the role of nursing her mother. Edward bought a conservatory during this time where Emily used to grow climate sensitive plants. She confined herself to the mansion boundaries, it was only the time she consumed in writing and gardening that brought her solace and respite.

By 35, she had written over a 1000 poems that she categorized in manuscripts; she had sent Samuel Bowles, the chief editor of Springfield Republican, around 50 poems of which he published a few anonymously in his journal.

In the late 1860s, she continued to write. However, she stopped collecting her poetry, which became fragments of poetic art. In 1872, she met judge Otis Phillips Lord, who was a respectable and elderly man.

Historians state that the two wrote plenty of letters to each other, and she was in love with him, however the huge gap in their ages was an obstacle. All speculations ended with his death in 1884.

She received no awards in the years that she treaded the earth. She restricted herself from social interactions. She was weary of her letters that she had written and wanted them destroyed.

She sent her poems and letters only to close family and friends who appreciated her writing skills and never solicited recognition for the same. It was only after her poems were published that she was looked upon as a transcendentalist as her contemporary Ralph W. Emerson. 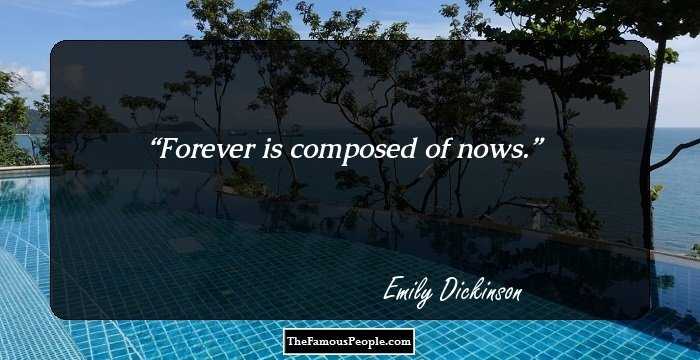 Emily Dickinson’s works were mostly published posthumously. The bulk of her works was retrieved by her sister Lavinia after the poet’s death. Her sister burnt most of her letters as she had promised Emily, but she recognized the prominent worth of her poems and wanted the world to applaud her sister’s works.

With the help of Mabel Loomis Todd in 1890, an edited version of Emily Dickinson’s poems was published by T. W. Higginson, but they voraciously edited her work to meet the norms of punctuation and capitalization.

Thomas H. Johnson published the first scholarly collection in 1955. They were the exact replica of her manuscripts—untitled and only numbered. No alterations were made and the unconventional punctuation and capitalization was left as written by her.

In 1958, along with Theodora Ward, Johnson published A Complete Collection of Dickinson’s Letters, which was presented in three volumes. In 1981, her original papers were printed under the name The Manuscript Books of Emily Dickinson.

However, it is surmised that the order of her poetry and letters are still incorrect and are not maintained in chronological order containing the pun, irony, and humor as intended by her.

Sources corroborate that Emily Dickinson’s health began to deteriorate after the untimely death of her youngest nephew in 1883. She became extremely fragile and was bedridden; but even during severe illness, she continued to write.

At the age of 55, on 15 May 1886, Emily Dickinson died of a kidney disorder called Bright’s Disease. As per her last wish, she was carried through a blooming field of buttercups to her burial site, where her coffin was laid in the family cemetery.

Because of the wide heritage that stood in the Homestead, especially contributing to the proliferous work of Emily Dickinson, the mansion has now been preserved as a museum.

Martha Dickinson Bianchi, Susan Gilbert’s daughter and Emily’s niece, has been significant in publishing her aunt’s works, such as Emily Dickinson Face to Face and Letters of Emily Dickinson. Millicent Todd Bingham, daughter of Mabel Loomis Todd, has also contributed to spreading the legacy of Emily’s work.

Emily Dickinson’s herbarium, consisting of 66 pages of special plant species from her garden, is now preserved at the Harvard University. The special collections of Amherst College also contain the original portrait and locks of the great poet.

The Amherst College also purchased the house of William and Susan Dickinson. The house, which was called Evergreens, was converted into a museum. The house opened its doors to tourists and was renamed the Emily Dickinson Museum.

Very little is known about the romantic life of Emily Dickinson, and it seems that she abstained from any such emotions and needs. Yet evidence suggests that she had received a marriage proposal from a graduate at the Amherst, named George H. Gould, but she declined his proposal and died a spinster.

Quotes By Emily Dickinson | Quote Of The Day | Top 100 Quotes

See the events in life of Emily Dickinson in Chronological Order