(One of the Most Influential Poets in the American Canon, Regarded as the 'Father of Free Verse')

Walter Whitman was an American poet, journalist and humanist. He is mainly known for his approach to Transcendentalism and realism and mastery in free verses, which mirrors in his works. Born into a family of farmers in Long Island, he grew up in Brooklyn, living there through much of his career. An autodidact, he had to give up his schooling at the age of eleven to augment the family income, thereafter taking up various small jobs, including teaching, anonymously publishing poems in various journals.  At the age of 19, he founded a weekly newspaper, shortly breaking into professional journalism, publishing his first book, a novel, at the age of 23 and the first edition of his most celebrated work, Leaves of Grass, at 36. Partly inspired by his admiration for Ralph Waldo Emerson and partly by his travels through the American frontier, he spent most of his life revising and enlarging the book, publishing several editions of it until his death. Amy Robach
DID WE MISS SOMEONE?
CLICK HERE AND TELL US
WE'LL MAKE SURE
THEY'RE HERE A.S.A.P
Quick Facts

Walter Whitman was born on May 31, 1819, in West Hills, a hamlet in the Town of Huntington, Long Island, USA, where his ancestors had lived for 125 years. His father, Walter Whitman Sr., was of English ancestry, while his mother, Louisa Van Velsor, was of Dutch descent.

By the time Walt Whitman was born, the family had lost much of the land and his father had taken to house-building. They were typical farm people with little education.

In 1823, his father moved his growing family to Brooklyn, where he speculated in real estate and built cheap houses for artisans. But due to bad investment, found it difficult to provide for his family; as a result Walt's childhood was spent in monetary hardship.

Walt Whitman began his education in a public school; but had to give that up at the age of eleven and start working. For a time, he was an office boy for two lawyers before joining Patriot, a local weekly newspaper, as an apprentice and printer's devil.

While working at the Patriot, he continued to study by himself, sometimes writing odd pieces to fill up space. Eventually, he left the newspaper to work; first for Erastus Worthington in Brooklyn, and then for the Long-Island Star.

It was while working for Long-Island Star that he began to move around in the literally circle, anonymously publishing his early poems in the New-York Mirror. But in 1836, circumstances forced him to move to rural Long Island, where he taught at various schools till 1838. 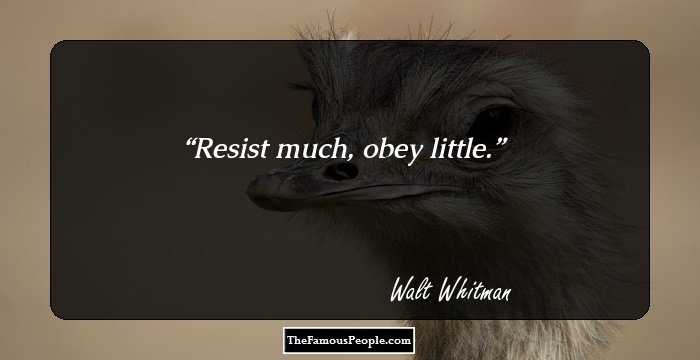 In 1838, while living in Long Island with his family, nineteen years old Walt Whitman founded a weekly newspaper, called the Long-Islander, serving as its reporter, editor, printer, and delivery boy.  However, he sold the paper after ten months, thereafter taking up several small jobs to earn his living.

By early 1840s, he had broken into professional journalism, publishing a series of ten editorials, entitled Sun-Down Papers—From the Desk of a Schoolmaster, in three different newspapers. In May 1841, he moved to New York, working under personalities like Park Benjamin Sr. and Rufus Wilmot Griswold.

In March 1842, he was appointed editor of The New York Aurora. Although he brought about positive changes, he had to leave the paper due to dispute with the owners.  Also in 1842, he published his first work; a temperance novel entitled Franklin Evans; or The Inebriate.

In 1844, he came across an essay by Ralph Waldo Emerson.  In this essay, the author expresses the need for the United States to have its own poet, who would write about different aspects of American life, about its politics and trade, its blacks and Indians, virtues and vices.

While Whitman decided to respond to Emerson's call, it is not known when he actually started writing poems. Meanwhile, he continued to earn his living as an editor, concurrently contributing pieces to various journals and newspapers.

In 1846, he was appointed the editor of the Brooklyn Daily Eagle. In the same year, he began publishing his second work, Arrow-Tip, in the same paper anonymously. Later, the book was published with a new title, The Half-Breed; A Tale of the Western Frontier

Walt Whitman left Brooklyn Daily Eagle in early 1848, because of his support for the Free-Soil wing of the Democratic Party. Thereafter, he moved to New Orleans, where he served as the editor of New Orleans Crescent for three months; but returned to New York after witnessing a slave auction.

In New York, he cofounded a free-soil newspaper called the Brooklyn Freeman, serving as its editor to till the fall of 1849. When the venture failed, he began to dabble in real estate, concurrently continuing to write, publishing a city-mystery novel called Life and Adventures of Jack Engle in 1852 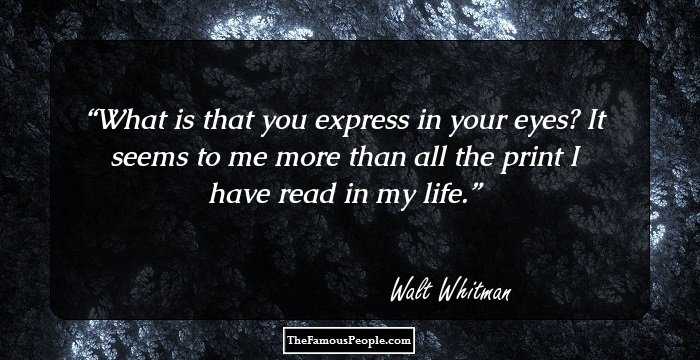 Quotes: You, Life, Me, I
Continue Reading Below
Leaves of Grass & Civil War

In 1855, Walt Whitman self-published his first edition of Leaves of Grass, a book of verses consisting of only twelve poems.  Later, he would write and rewrite the book several times, self-publishing second edition in August 1856, adding twenty poems to it. However, some poems were criticized for their sexual overtones.

In May 1857, financial constraint forced him to join Brooklyn Daily Times as an editor, serving in this capacity till 1859. Meanwhile, in 1858, he published Manly Health and Training.

As the American Civil War broke out in April 1861, Walt Whitman went in search of his brother, whom he thought was dead. However, he found him alive, but the war scenes affected him greatly and he decided to serve the wounded at New York City-area hospitals, concurrently working as a freelance journalist.

In December 1862, Whitman moved to Washington, D. C. to care for his brother, who had been wounded in the war. Touched by the agony of the wounded soldiers, he eventually decided to stay back and work in the hospitals, remaining there till 1873.

In January 1865, Walt Whitman joined the Bureau of Indian Affairs as a clerk; but was fired from the job when the Secretary of the Interior discovered that he was the author of Leaves of Grass, a book he had found distasteful. Thereafter, he managed to get a job at the attorney general's office.

In May 1865, he published a collection of war poems called Drum-Taps, which was followed in autumn by Sequel to Drum Taps. Very soon, he began to attract greater attention, both at home and abroad.

In 1871, he published his seventh book entitled Democratic Vistas, now considered a classic on comparative politics and letters, which was followed in 1876 by Memoranda During the War. Meanwhile in 1873, Whitman suffered a paralytic stroke, which forced him to move to his brother's home in Camden, New Jersey.

He lived in his brother's home until 1882, leading a very productive life, publishing the seventh edition of Leaves of Grass in 1881. During this period, his poems were related more to soul, death and immortality. His last work, Specimen Days was published in 1882.

In 1882, he was able to buy his own house. He lived there all by himself until February 1885, when Mary Oakes Davis moved in with him, serving as housekeeper in lieu of rent.  Here he spent his last years, working on his deathbed edition of Leaves of Grass (1891-1892). 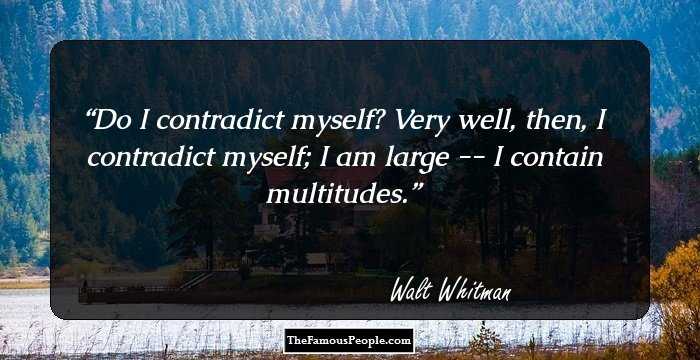 Walt Whitman is best known for his life-long work, Leaves of Grass, a collection of poems he continued to revise throughout his life, adding more and more poems to it. Considered a landmark in the history of American literature, the first edition was a small book of twelve poems, while the last one was a compilation of over 400.

Most famous of the poems compiled in the collection are Song of Myself, I Sing the Body Electric, Out of the Cradle Endlessly Rocking and When Lilacs Last in the Dooryard Bloom’d. Written in the summer of 1865, the last-mentioned poem is an elegy to fallen president, Abraham Lincoln.

In 2009, Walt Whitman was inducted into the New Jersey Hall of Fame and in 2013 into the Legacy Walk in Chicago.

Whitman died on March 26, 1892 and was buried four days later at Harleigh Cemetery in Camden. The cause of death has been listed as "pleurisy of the left side, consumption of the right lung, general miliary tuberculosis and parenchymatous nephritis".

Between 1876 and 1884, he spent a lot of time in the pastoral community of Laurel Springs, New Jersey, converting one of the Stafford Farm buildings to his summer home. He wrote parts of Leaves of Grass In this house, which has now been turned into a museum.

Quotes By Walt Whitman | Quote Of The Day | Top 100 Quotes

See the events in life of Walt Whitman in Chronological Order