One of the most popular writers of contemporary horror, suspense and science fiction, American author Stephen King has published over 50 novels and penned hundreds of short stories. Best known for writing the horror novel ‘It’ which revolves around a mysterious maleficent being that terrorizes children, King is undoubtedly one of the most loved horror writers whose writings never fail to incite fear, terror and fright in the minds of the readers. The author who mostly publishes under his real name also used to publish under the pseudonym ‘Richard Bachman’. Funnily enough, the sale of Richard Bachman’s books increased manifold after it was revealed that Bachman was none other than Stephen King himself. King is a highly prolific writer and the winner of multiple awards including the prestigious Bram Stoker Awards. Growing up King had a difficult childhood as he was raised by a single mother in financially difficult circumstances. While still a small boy he witnessed the horrific death of a friend who was struck and killed by a train in front of his eyes—this incident might have played a role in inspiring some of his darker writings. His first published novel was ‘Carrie’ which was so successful that it led to several film and Broadway adaptations. Nick Name: The King of horror, Richard Bachman, The King

American People
Novelists
Non-Fiction Writers
Short Story Writers
American Men
Childhood & Early Life
He was born on September 21, 1947 to Donald Edwin King, a merchant seaman and his wife, Nellie Ruth. His father abandoned the family when Stephen was two years old leaving his wife to provide for herself and her two sons.
He loved to read horror novels and once read a collection of short stories called ‘The Lurker in the Shadows’ by H. P. Lovecraft and realized his life’s calling.
He graduated from Lisbon Falls High School. While at school he used to write for fun and even sold his stories to his friends. One of his stories was published in the fanzine, ‘Comics Review’ in 1965.
He enrolled at the University of Maine in 1966 and graduated with a Bachelor of Arts in English in 1970. He used to do part time jobs to support his education. He earned a certificate to teach high school after leaving the university. 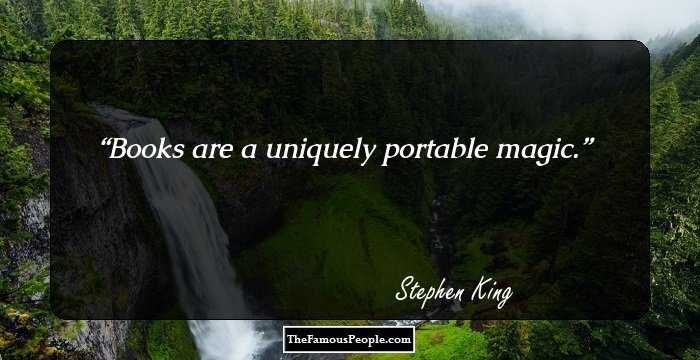 Quotes: Books
Continue Reading Below
Career
He found a job as an English teacher at a public high school, Hampden Academy, in 1971. He continued writing in his free time. He was working on a novel called ‘Carrie’ but was frustrated that it seemed to go nowhere.
The novel ‘Carrie’ was finally published in 1974. It told the story of a teenage girl who uses her telekinetic power to exact revenge on the people who had humiliated her. The novel was a hit.
In 1977, he released the novel ‘The Shining’ which revolves around a young boy who possesses psychic abilities that allow him to witness the past horrors that had happened in the hotel he is staying in with his parents. This novel established King as a popular horror writer.
His 1983 novel, ‘Pet Sematary’, which was nominated for a World Fantasy Award for Best Novel, was about a cemetery which has special powers to resurrect the dead that have been buried there. This novel was later made into a popular movie of the same name.
King published a psychological horror novel ‘Misery’ in 1987 which is about a writer who is abducted by a crazy fan who is upset with the ending of one of his books and forces him to rewrite the story, torturing him in the process.
In 1996, his serial novel, ‘The Green Mile’, telling the story of a death row supervisor’s experiences with an unusual inmate, was published. Set in the 1930s, the book is a great example of magical realism.
Published in 2001, his novel ‘Black House’ was written in collaboration with another writer, Peter Straub. The story is a chilling tale of a serial killer who targets children and eats their dead bodies.
His novel, ‘Duma Key’, published in 2008, is about a contractor, Edgar Freemantle, who suffers a terrible accident and experiences severe personality changes and eventually acquires the power to paint events that will occur in future.
Some of his more recent novels include ‘The Dark Tower: The Wind Through the Keyhole’ (2012), ‘Joyland’ (2013), and ‘Mr. Mercedes’ (2014). 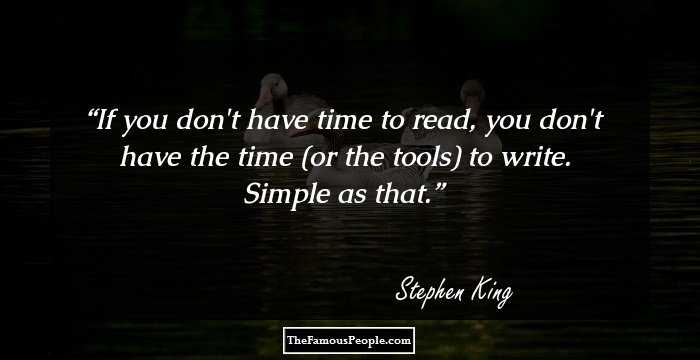 Quotes: You, Time
Major Works
’The Shining’ is the novel which played a major role in making him a famous writer of horror thrillers. It was his first bestseller which was later made into a movie of the same name by director Stanley Kubrick.
His novel ‘It’, which is about a mysterious being that terrorizes children was his first novel in which he explored the themes like childhood trauma, memory power, and phobias, which would recur in his future novels. The novel had been adapted into several plays and films.
The novella ‘Rita Hayworth and Shawshank Redemption’ was undoubtedly one of his best known works, popularized by the 1994 movie ‘The Shawshank Redemption’ which was nominated for several Academy Awards.
Awards & Achievements
In 2002, King along with J. N. Williamson was honored with The Bram Stoker Award for Lifetime Achievement for their significant contribution to the genre of horror writing. He is also the recipient of several Bram Stoker Awards.
In 2003, he was awarded the Medal of Distinguished Contribution to American Letters by the National Book Awards which were established in 1936 by the American Booksellers Association. 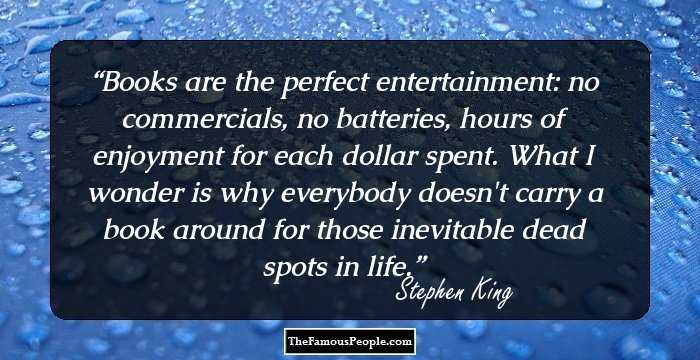 Quotes: Life, Books, I
Personal Life & Legacy
King married Tabitha Spruce, a fellow student at the University of Maine, in 1971. The couple have three children—two sons and one daughter. Both his sons are published authors themselves.
Recommended Lists:
Non-Fiction Writers #33
Writers #157

Quotes By Stephen King | Quote Of The Day | Top 100 Quotes

See the events in life of Stephen King in Chronological Order