Popularly known as the Iron Lady of Pakistan, Benazir Bhutto opened the doors of politics for women in Pakistan. Not only did she become the first woman to head a major political party, but she went on to become the first and till date, the only female Prime Minister of Pakistan. She served this powerful position twice in her lifetime. Born in a prominent political family, she was exposed to political thoughts and beliefs since a young age. The imprisonment and the subsequent execution of her father, Zulfikar Ali Bhutto, brought Benazir into the centre stage of Pakistan politics as she succeeded her father as the titular head of the Pakistan People’s Party. Most of her ideals were centred on democratic and social capitalist policies. Her charismatic presence coupled with political shrewdness and unabated courage earned her the nickname ‘Iron Lady’. Most of her contemporaries and rivals respectfully addressed her as ‘B.B’. During her term as the Prime Minister from 1988 until 1990 and 1993 until 1996, she brought about several political and economic policies for industrial development and growth. She favoured denationalisation of state-owned corporations and took a hard stand against trade unions and rigid labour markets. However, high levels of corruption, escalating unemployment and stifling recession brought about an end to her governance. To know more about her life and profile, scroll further. Pervez Musharraf
DID WE MISS SOMEONE?
CLICK HERE AND TELL US
WE'LL MAKE SURE
THEY'RE HERE A.S.A.P
Quick Facts

Pakistani Celebrities
Political Leaders
Pakistani Women
Harvard University
The University of Oxford
Childhood & Early Life
Benazir Bhutto was born to Zulfikar Ali Bhutto and Begum Nusrat Ispahani. She was the eldest of the four siblings. Her father was the former prime minister of Pakistan. As such, since young, she was exposed to political ideas and policies.
She completed her early education from Pakistan and went to US to enrol herself at Radcliffe College, Harvard University. In 1973, she graduated with a Bachelor of Arts degree with cum laude honours in comparative government.
From 1973 until 1977, she studied philosophy, politics and economics at Lady Margaret Hall, Oxford, United Kingdom.
In 1976, she became the first Asian woman to be elected as the President of Oxford Union. 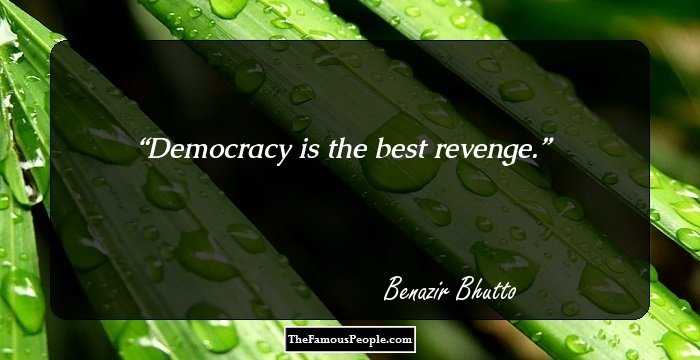 Continue Reading Below
Political Career
Upon her return to Pakistan in 1977, she along with her family was placed under house arrest following the dethronement of her father Zulfikar Ali Bhutto from the prime ministership and the emergence of General Mohammad Zia ul-Haq to power.
She inherited the leadership of her father’s political party, Pakistan People’s Party (PPP) and spent the next two years organizing rally to force General Haq to drop murder charges against her father.
Against local plea and international pressure, Zulfikar Ali Bhutto was hanged on April 1979, following which she was arrested and moved to Larkana Central Jail. In 1981, she was imprisoned in a desert cell in Sindh Province.
Succumbing to immense international pressure, she along with her family was allowed to travel abroad in 1984 for medical aid. Following her recuperation, she resumed her political pursuit, becoming a leader in exile for PPP, raising awareness of the state of political prisoners and human right violation under Zia regime.
In 1986, she returned to Pakistan after two years of self-exile upon the lifting of the martial law and launched a nationwide campaign for open elections.
In 1988, a mysterious air accident caused the death of General Haq, leaving a vacuum in Pakistan politics and the need for elections.
In the 1988 elections, the PPP party led by her emerged as the winner, winning the largest percentile of seats in the National Assembly. She was designated to the prime ministerial position on December 2, 1988, thus becoming the first woman prime minister of a Muslim state.
During her first term as prime minister, she could not do much to combat the problems of poverty, corruption and crime. Moreover, her aim to shift Pakistan's semi-presidential system to a parliamentary system also turned out to be a failure as most of the proposed laws were vetoed by conservative President Ghulam Ishaq Khan.
In 1990, following the failure to curb corruption and unemployment and the downfall in the economic graph of the country, President Khan ousted her from the Prime Minister position using the Eight Amendment with charges of corruption, nepotism and despotism.
Continue Reading Below
In the 1990 elections that occurred at the aftermath of her expulsion, her party failed to register a victory and opposition leader Nawaz Shariff succeeded the chair. She accepted her defeat and took over the role of the Leader of Opposition.
Following the resignation of Nawaz Sharif and President Khan in 1993, elections were held and PPP party won the same. She was elected for a second term as the Prime Minister of Pakistan. She appointed Farooq Leghari as the President.
During election campaign Benazir promised promised price supports for agriculture, pledged a partnership between government and business and campaigned strongly for the female vote. However, once in power, she was not able to implement any of her agendas and failed miserably.
She was neither able to contain racial tension that was at its peak in Karachi nor corruption scandals which only worsened the economic condition of the country. Furthermore, women issues were not dealt with as no reforms were made and controversial laws were instead exercised more toughly.
She had promised denationalization programme and liberalisation of the economy during her second term but none of the same ever occurred. As such, inflation and unemployment increased thus causing a decline in the living standard of the people.
With the ever increasing corruption and death of younger brother, the credibility of her government declined. It faced harsh criticism became hugely unpopular amongst the public, a result of which was dismissal of her government in 1996.
In 1997, she moved to Dubai along with her children to escape the corruption charges by the Nawaz Sharif government. Her husband, Asif Ali Zardari was held in captive and imprisoned.
From 1996 until 1999, she became the Leader of the Opposition in exile in the Parliament. In 1999, Pakistan’s involvement in Kargil War brought about international shame for the country and hindered Shari’s public image. Benazir capitalized on the situation and gathered support for herself.
She aimed to bring her PPP party back in action but when Pakistan Armed forces adopted the coup d'�tat, she supported the same. With General Pervez Musharraf’s ascend to power, her demand for corruption charges being dropped were denied. As a result, she remained in exile in London and Dubai.
Continue Reading Below
In 2002, when Pervez Musharraf amended the Pakistan constitution, banning prime ministers from serving more than two terms, her chance to hold office ever again was disrupted. Furthermore, prohibition for a court-convicted individual from holding party office made it impossible for her to compete in the elections.
In 2007, she returned after serving eight years of self-imposed exile. All charges against her were pardoned by Musharraf and a power-sharing deal between Bhutto and Musharraf’s military regime came into force.
Upon her return, she participated in the preparation for 2008 parliamentary elections. However, the same was cut short due to her assassination in December 2007. 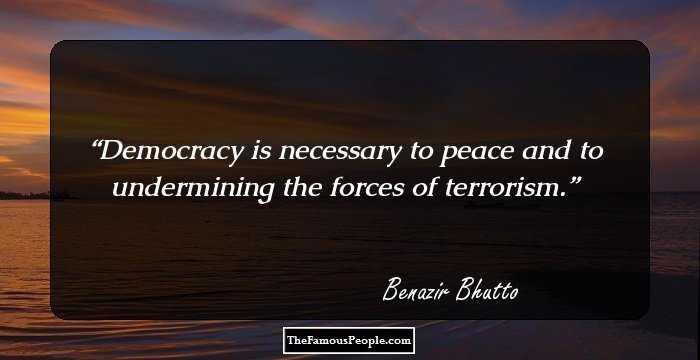 Quotes: Peace
Awards & Achievements
Posthumously, she was named one of seven winners of the United Nations Prize in the Field of Human Rights.
Personal Life & Legacy
She married Asif Ali Zardari on December 18, 1987. The couple was blessed with two daughters and a son.
Following her return to Pakistan, while campaigning for the parliamentary elections, she was assassinated on December 27, 2007. She was leaving for the campaign rally for PPP at Liaquat National Bagh, when she was shot by a gunman while she waved the crowd through the sunroof of her car. Subsequently, explosives were detonated near the vehicle killing approximately 20 people
She was taken to Rawalpindi General Hospital where she was declared dead by evening. A three-day period of mourning was declared by President Pervez Musharraf.
In order to pay gratitude and respect to the contributions she made in the political scenario of the country, the government of Pakistan renamed Islamabad International Airport as Benazir Bhutto International Airport, Muree Road of Rawalpindi as Benazir Bhutto Road and Rawalpindi General Hospital as Benazir Bhutto Hospital. 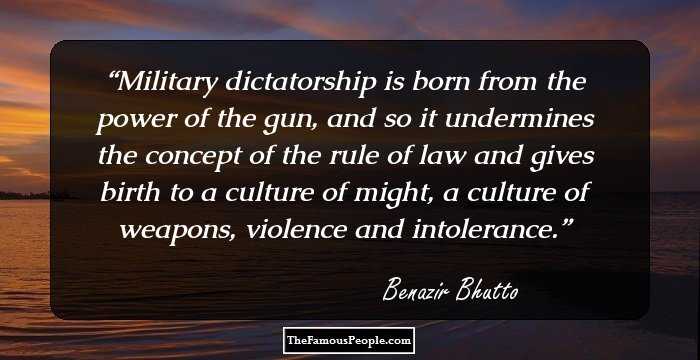 Trivia
She was the first female Prime Minister of Pakistan and the first woman to head a major political party in a Muslim state.

Quotes By Benazir Bhutto | Quote Of The Day | Top 100 Quotes

See the events in life of Benazir Bhutto in Chronological Order