Witty, gutsy, belligerent and strong-willed, this 19th century writer’s work and life, is both intangible and grappling. One of the most striking modernist writers of her time, Katherine Mansfield has inspired many of her contemporaries and has also been the subject of animosity among those who never flourished as much as she did in the genre of ‘short-stories’. Her works became so famous that writers like Christopher Isherwood and Aldous Huxley began to draw on her themes and characters for their plots and stories. She is best-known for the short-stories, ‘The Woman At the Store’, ‘A Dill Pickle’ ‘Je ne parle pas Francais’, ‘Bliss’, ‘The Stranger’ and ‘The Canary’. Apart from her literary career, she was an open bisexual and engaged in ravenous sexual relationships, which partly led to her downfall and made her career stagnant from time to time. Her free-spirited yet scandalous affairs with both, men and women, risked a great deal in terms of her career and also put her through considerable suffering in her lifetime. Her influence on the writers of the 20th century has been immeasurable as she constantly strived to explore new horizons with her writing through the expansion of vocabulary. Writing became the first and foremost medium for her to express her ideas and somehow, unburdened herself from her harrowing emotions; a sort of personal freedom she always seemed to yearn for. Scroll further to learn more about this interesting personality. Abraham Valdelomar
DID WE MISS SOMEONE?
CLICK HERE AND TELL US
WE'LL MAKE SURE
THEY'RE HERE A.S.A.P
Quick Facts

New Zealander Celebrities
New Zealand Women
Libra Writers
Women Writers
New Zealander Writers
Childhood & Early Life
She was born as Kathleen Mansfield Beauchamp into a wealthy family in Wellington, New Zealand. She was the third of the five children born to a financier and the chairman of the Bank of New Zealand, Harold Beauchamp.
She first published her stories in the Wellington Girls’ High School magazine and the High School Reporter.
Disillusioned with her childhood, she began writing stories about her experiences in New Zealand and her views on the treatment of Maori people. She then moved to London in 1903, where she enrolled to Queen’s College.
It was here she played the cello and occasionally started writing articles for the university newspaper. Between 1903 and 1906, she toured Europe and was mainly enamored by Germany and Belgium.
Following her graduation, she returned to New Zealand In 1906 and started writing short stories. 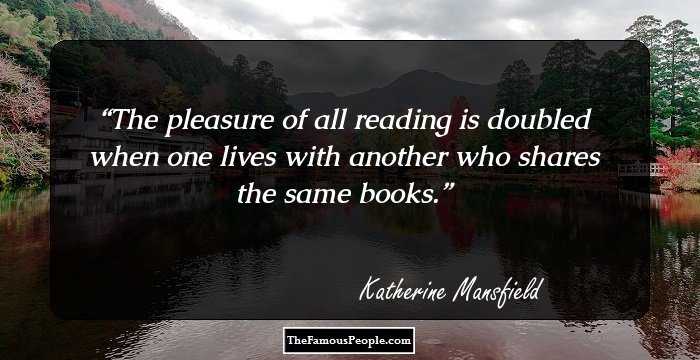 Quotes: Books
Continue Reading Below
Career
She had several of her stories and articles published in a local Australian publication, ‘Native Companion’. This was not only her first venture as a professional writer, but it was also the first time she used the alias, ‘K Mansfield’.
She returned to London in 1908 and was involved in a tumultuous love affair, which led to a brief halt in her career. Around this time, she got pregnant and had a daughter in Bavaria, Germany, a place which had considerable influence on her works.
She documented her experiences in Germany in a publication titled, ‘In a German Pension’, which was published in 1911.
Around this time, she was inspired by Fauvism and she published a short-story, ‘The Woman at the Store’, which was published in the unconventional magazine, ‘Rhythm’.
Post-marriage, she moved to Paris in 1914, along with her husband in the hope of gaining new inspiration for her works.
Here, she wrote only one short story, ‘Something Childish But Very Natural’, which was published only after her death, though it was written in 1914. She was called back to London, where she was declared bankrupt.
During her time in Paris, she became enamored with a writer, Francis Carco, which inspired her to write about her inconspicuous relationship in, ‘An Indiscreet Journey’, published in 1920. However, her style of writing and themes changed following the death of her younger brother, Leslie Beauchamp.
In 1916, she was at her productive peak and began writing a plethora of stories including, ‘Mr. Reginald Peacock’s Day’, ‘A Dill Pickle ‘ and ‘Prelude’.
Despite being diagnosed with tuberculosis in 1917, she continued to publish short stories viz. ‘Je ne parle pas Francais’ and ‘The Man without a Temperament’.
Continue Reading Below
Following her separation with her husband, a collection of her short stories was published such as ‘Bliss’, and ‘The Garden Party’. By the end of her life, she had composed an extremely high-volume of work, but most of her works remained unpublished till her death. 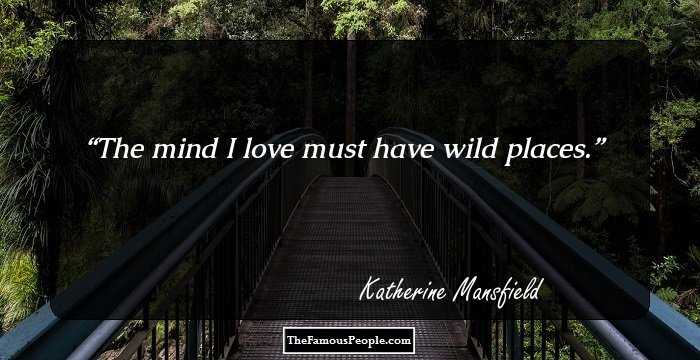 Quotes: Love, I
Major Works
‘An Indiscreet Journey’, published in 1920, is considered one of her greatest works because it includes details of her personal experiences related to war and the relationship she shared with her French lover during her trip to France. Written in a typical modernist style, the short story was first published in the ‘Athenaeum’ and was later re-published in another publication entitled, ‘Bliss and Other Stories’.
‘The Garden Party: and Other Stories’ is a collection of her short-stories, published in 1922 which comprises of all her popular short-stories including ‘At the bay’, ‘Mr. And Mrs. Dove’, ‘The Voyage’, ‘Her First Ball’ and ‘The Stranger’. This is considered one of her important works because most of the stories in the publication are set to be free-spirited and of modernist themes; one that was quite rare in her days.
Personal Life & Legacy
When she was in England, at the age of nineteen, she fell in love with Garnet Trowell and became pregnant. She then rashly married her singing teacher, George Bowden and then abandoned him—all of which happened within seven months of her arrival.
She then gave birth to her baby in Germany and at the same time, she fell in love with a Polish writer, Floryan. It is believed that a possible ectopic pregnancy around this time resulted in the loss of one of her fallopian tubes and a subsequent, miscarriage.
She had numerous affairs with many men and was also believed to have been in two lesbian relationships with Maata Mahupaku and Edith Kathleen Bendall.
Her final years were that of pain and suffering. She sought medical help from a physician, Ivan Manoukhin for tuberculosis and then moved to France. On one ill-fated day, when she was climbing the stairs, she suffered a pulmonary hemorrhage which eventually resulted in her death at the age of 34.
Today, there are a number of educational institutions which have a house named in her honor including, ‘Rangitoto College’, ‘Mount Roskill Grammar School’ and Westlake Girls’ High School. A number of films have also been made on her life including ‘Leave all Fair’, ‘Bliss’ and ‘A Picture of Katherine Mansfield’.
A biography by Kathleen Jones, entitled ‘Katherine Mansfield: The Story-Teller’, was published in 2010. 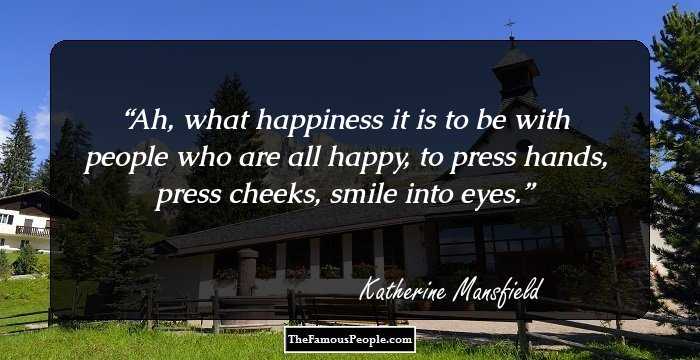 Quotes: Happiness
Trivia
This author from New Zealand, who penned ‘A Dill Pickle’, was a talented cellist as well.

Quotes By Katherine Mansfield | Quote Of The Day | Top 100 Quotes

See the events in life of Katherine Mansfield in Chronological Order 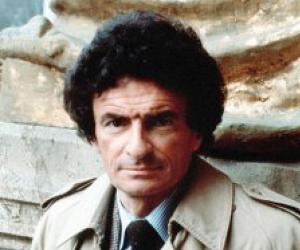 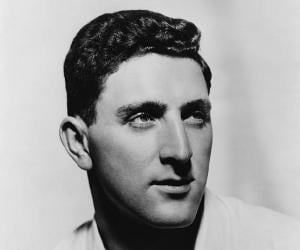