Advanced Search
Robert Albert Bloch was an American writer of novels, short stories and screenplays of many famous television productions and film productions – his works belonged mainly to the crime, horror, fantasy and sci-fi genre. He is most famously known as ‘the man who wrote Psycho’—‘The Psycho’ being the most important work of his career, a thriller novel with twists and turns that sends shudders through the reader and jostle them with the lifelike imagery that his words create—which took him to Hollywood. After the film rights of the book was bought by Alfred Hitchcock and it was turned into a famous feature film, Bloch became a regular on the scene of television and film scriptwriting. Received no formal education beyond high school, his writing career lasted for over 60 years and he had 30 years of work experience in television and movies. He started his literary livelihood by writing short stories for magazines like, ‘Weird Tales’, ‘Amazing’, ‘Fantastic’, ‘The Magazine of Fantasy and Science Fiction’, etc. He was recognized for his prolific contribution to the world of writing with awards like, Hugo Award, Edgar Allan Poe Award, World Fantasy Award, etc. Gene Hackman
5th April In History
DID WE MISS SOMEONE?
CLICK HERE AND TELL US
WE'LL MAKE SURE
THEY'RE HERE A.S.A.P
Quick Facts

American Celebrities
Short Story Writers
American Men
Aries Writers
Male Writers
Childhood & Early Life
Robert Bloch was born on April 5, 1917, in Chicago to Raphael Bloch and Stella Loeb. His father was a bank cashier while mother a social worker. He was raised in a middle-class Jewish family.
Bloch family moved to Maywood when he was only five and there he attended the Methodist Church even though he belonged to Jewish religion. It was while growing up in Maywood that Bloch inculcated interest in horror.
In 1929, the family moved to Milwaukee as Bloch’s father lost his job. Here Bloch attended the Lincoln High School and wrote for the school magazine, The Quill. After graduating, he started working at drama department of the school. 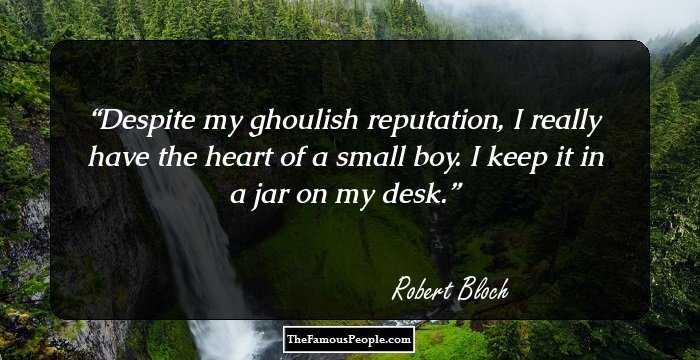 Quotes: Heart, I
Continue Reading Below
Career
In 1935, Bloch became a part of ‘The Milwaukee Fictioneers’ - it was a writers’ group, which included other members like, Gustav Mark, Stanley Weinbaum, Raymond Palmer, etc. Mark gave him job in his advertising firm as a copy writer.
Bloch was hired to write and contribute in the campaigning of Carl Zeidler in 1939. He worked on his speechwriting, advertising and photo ops. Although he worked hard for the campaign but he was never paid the promised salary.
Bloch came out with his original take on the fictional character, ‘Jack, the Ripper’, in his story ‘Yours Truly, Jack the Ripper’, which was published in ‘Weird Tales’ magazine in 1943. It was later adapted for the radio and television.
His first thriller novel, ‘The scarf’ was published in 1947, which is a story of a writer named ‘Daniel Morley’ who uses real women as models for his characters and murders them afterwards.
In 1954, Bloch came out with three different thriller novels, ‘Spiderweb’, ‘The Kidnapper’ and ‘The Will to Kill’. He was also chosen to be a weekly guest panelist on the television show, ‘It’s a Draw’.
Bloch had gained some amount of critical and commercial success by now but in 1959 with the publishing of his novel ‘The Psycho’ his life changed forever - his name was appended with this piece of brilliance forever.
With ‘The Psycho’s’ instant success, Bloch was approached to sell its film rights to a Hollywood production company. He sold the rights for $9500 and later learned that it was Alfred Hitchcock who bought the rights.
In 1959, Bloch won science fiction’s most prestigious accolade, the Hugo Award, for his short story titled, ‘The Hell-Bound Train’. It was after receiving the award that he was asked to write the script for television drama, ‘Lock-Up’.
In the same year, he wrote a few scripts for another television project called, ‘Alfred Hitchcock Presents’. But a strike by the Writer’s Guild forced him to return back to writing short stories.
Continue Reading Below
In 1960, Bloch released a novel titled ‘The Dead Beat’ as well as a collection of short stories titled ‘Pleasant Dreams’. It was the same year in which Hitchcock’s ‘Psycho’ was released, making Bloch a big name in Hollywood.
In the ‘60s, after the strike ended, Bloch returned to screenwriting and wrote screenplay for ‘The Couch (1962)’, an episode for ‘Bus Stop’, 10 episodes for ‘Thriller’, 10 episodes for ‘Alfred Hitchcock Presents’, screenplay for ‘The Cabinet of Caligari (1962)’, etc.
Other works from this period includes: ‘Firebug (1961)’, screenplay for ‘Strait-Jacket (1964), ‘The Night Walker (1964)’, ‘The Skull (1965)’, ‘Journey to Midnight (1968)’, ‘The House That Dripped Blood (1970)’, etc.
Throughout the ‘70s and ‘80s, Bloch continued with his screenplay writing—wrote single episodes for ‘Night Gallery (1971)’, ‘Ghost Story (1972)’, ‘Gemini Man (1976)’, etc.
He continued with writing fictions and screenplays and wrote novels like, ‘Sneak Preview (1971), ‘Strange Eons (1978)’, ‘Lori (1989)’, etc. and wrote screenplays for, ‘Darkroom’, ‘Tales from the Darkside’, etc. 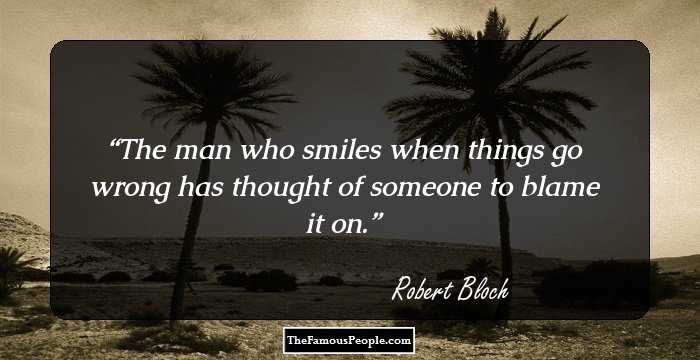 Major Works
Bloch’s ‘The Psycho (1959)’ revolutionized his writing career and made him a big name not only in the fiction circle but also in Hollywood after Alfred Hitchcock bought its film rights and turned into in a movie in 1960.
Awards & Achievements
Bloch is winner of many prestigious awards like: Ann Radcliffe Award (1960), Edgar Allan Poe Award (1960), Inkpot Award (1964), Ann Radcliffe Award for Television (1966), World Fantasy Award (1975), Hugo Special Award (1984), Bram Stoker Award (1989), etc. 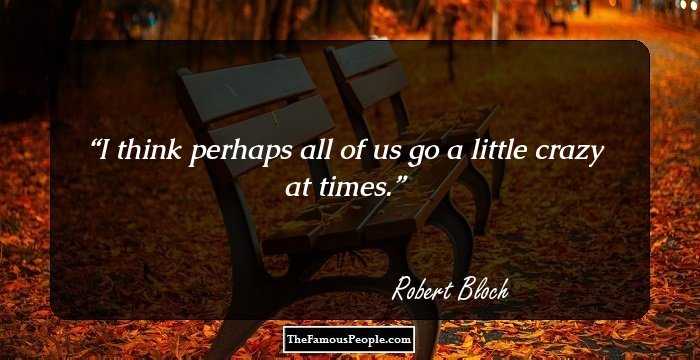 Quotes: Think, I
Personal Life & Legacy
In 1940, Bloch got married to Marion Ruth Holcombe; it was considered to be a marriage of convenience to keep him out of the army. They had a daughter together – Sally. The couple got divorced in 1963.
He again got married in 1964 to a recently widowed Eleanor Alexander. She was a fashion model and cosmetician. They remained married until Bloch’s death and never had any children.
Bloch died of cancer at the age of 77 in 1994, in Los Angeles. He was cremated and interred in the Room of Prayer columbarium at Westwood Village Memorial Park Cemetery.
Trivia
Bloch was honored with the Honor of Master of Ceremonies at the first World Horror Convention held in Nashville, Tennessee in 1991.
He was a guest of honor at BYOBCON V science-fiction convention in Kansas City in 1975, where it was announced in his honor, that, ‘The author of Psycho is in the hotel. Shower with a friend’.
This prolific American fiction writer wrote most of his work on an old manual typewriter.

Quotes By Robert Bloch | Quote Of The Day | Top 100 Quotes

See the events in life of Robert Bloch in Chronological Order