Legendary pulp fiction writer and the creative genius behind the world famous fictional character ‘Conan the Barbarian’, Robert E. Howard was one among the greatest writers of adventure and fantasy stories. In a writing career that thrived for over a period of twelve years, Howard authored more than hundred stories that have been published in various pulp magazines of his time. Known as the ‘Father of Sword and Sorcery’, Howard was responsible for the creation of the sub-genre of this kind of fiction, which is also called heroic fantasy. His character of Conan has been compared to the likes of Tarzan, Dracula, Sherlock Holmes, Batman and James Bond. This prolific writer was one of the most gifted and skillful storytellers of his time and even to this day, is a highly read author, whose works are still being printed for publication. Till date, his work is inspirational for the new generation of fantasy and pulp fiction writers.
Continue Reading Below American Celebrities
Short Story Writers
American Men
Male Writers
Male Novelists
Childhood & Early Life
Robert E. Howard was born on January 22, 1906 to travelling country physician, Dr. Isaac Mordecai Howard and Hester Jane Ervin Howard in Peaster, Texas. Due to his father’s work profile, he travelled and resided in several of parts of Texas in his early life.
His mother played a significant role in his intellectual growth and inculcated in him a passion for literature and poetry. Though he was a voracious reader, he loathed attending school.
Since he was nine years old, he developed interest in writing and dreamt of becoming a writer. He had by this time authored several short stories and historical fiction.
Other than writing, he was deeply passionate about boxing, which at that time was an immensely popular sport. It was one of his passions and he soon trained himself as an amateur in the sport. 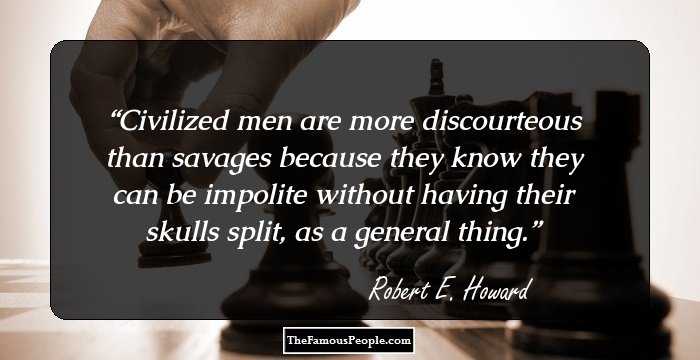 Who Is The Most Popular BTS Member?
Career & Later Life
His first professional outing as a writer was for the pulp magazine, ‘Weird Tales’. The story ‘Spear and Fang’, after facing too many rejections, was finally accepted by the magazine and earned him $16, his first ever self-earned money.
In 1926, he went on to complete a course on bookkeeping and the same year he began to work on his piece of writing titled, ‘The Shadow Kingdom’. This later became one of his best works.
In August 1928, his story ‘Red Shadows’ was published in the pulp fiction magazine, ‘Weird Tales’. This was later alternatively titled, ‘Solomon Kane’.
In August 1929, his story ‘The Shadow Kingdom’ was published for the first time in the pulp magazine, ‘Weird Tales’. The plot was set in the fictional world of the ‘Thurian Age’.
Later in the year 1929, his story titled, ‘The Apparition in the Prize Ring’ was published in the ‘Ghost Series’ magazine. This was one of his first pieces to be published in another magazine than ‘Weird Tales’. In July 1929, one of his stories titled, ‘Crowd-Horror’ was published in the ‘Argosy’.
He struck gold with the introduction of the character of Sailor Steve Costigan for the pulp magazine, ‘Fight Stories’. The series was a major hit and established his reputation as a writer. What made it different from the rest of the stories was his use of first-person narrative with the combination of traditional and slapstick comedy.
From the year 1930 onwards, he published some his best and most popular stories in the pulp magazine titled, ‘Oriental Stories’. His stories were inspired by themes of Middle East tales and varied across the time zones from the fall of Rome to the fifteenth century period.
In February 1932, he authored the poem titled, ‘Cimmeria’, which was set in a fictional country that he created of the same name. This provided the setting for the character named, ‘Conan the Barbarian’.
Post the introduction of Conan in the Weird Tales in December 1932, he published seventeen Conan stories in the magazines between 1933 until 1936.
Continue Reading Below
In December 1932, he published the short story, ‘The Phoenix on the Sword’ in the ‘Weird Tales’. This was one of the original short stories that involved ‘Conan the Cimmerian’.
Later in 1932 and 1933 he published the stories, ‘The Frost Giant's Daughter’, ‘The God in the Bowl’, ‘Black Colossus’, ‘The Slithering Shadow’ and ‘The Scarlet Citadel’.
In 1935, his novel ‘The Hour of the Dragon’ also titled, ‘Conan the Conqueror’ was published. It was published in serial format in the ‘Weird Tales’ magazine until the year 1936. 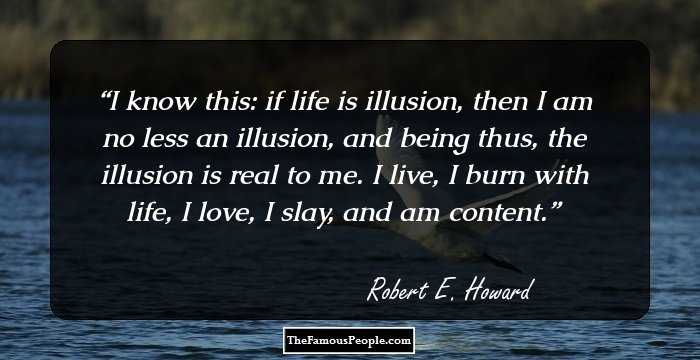 Quotes: Life, Me, Love, I
Major Works
He was the mastermind behind the legendary fictional character, ‘Conan the Barbarian’. This character has been adapted into several comics and books, even video games and cartoons. The character also inspired the films, ‘Conan the Barbarian’ and ‘Conan the Destroyer’.
Personal Life & Legacy
He was in a relationship with Novalyne Price and they dated on and off. However, he did not give her much attention due to his mother’s ill health. She later dated his best friend, Truett Vinson.
All through his life it is believed that he suffered from mental illnesses and depression. This was speculated as one of the reasons for his later suicide. It was also speculated that he suffered from Oedipal complex.
After hearing of his mother’s coma and being told that she will not recover from it, he shot himself in the head on June 11, 1936. He was 30 years old at the time of his death. Some speculate that his suicide was due to stress and not any form of mental illness.
His house in Cross Plains, Texas, is now a fully converted museum and it has been added to the list of National Register of Historic Places listings in Callahan County, Texas. 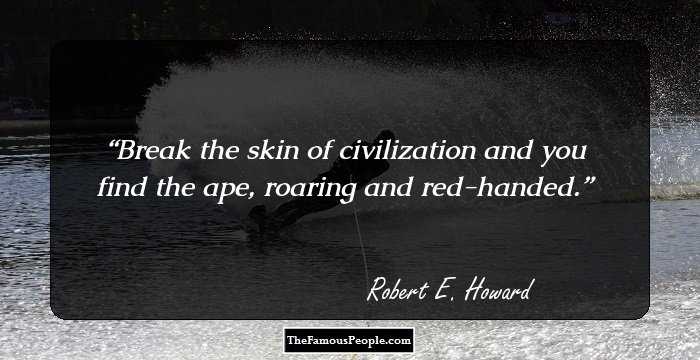 Quotes: You
Trivia
This pulp fiction writer feared old age and also had a phobia of old age. In many of his writings he often chose his characters to be eternally youthful.
You May Like

See the events in life of Robert E. Howard in Chronological Order