Sholem Aleichem was a renowned Yiddish novelist, essayist and playwright. He is considered to be among the most famous Yiddish authors during the late 19th and early 20th century. As a celebrated journalist, playwright, novelist, and editor, he became one of the founding fathers of modern Yiddish literature, who wrote under the pseudonym Sholem Aleichem, which literally meant ‘peace be upon you’ in Yiddish. He wrote stories in Hebrew and Russian before switching to Yiddish. Rather, he was the first author to create stories for children in Yiddish language. He authored over 40 volumes of novels, stories and plays, during his nearly three-decade literary career. He categorized his works into four genres – monologues, holiday narratives, children stories and Kasrilevke tales, of which monologues became his forte. His two characters, Tevye and Menakhem Mendl, which he created towards the end of the 19th century, became the protagonists of most of his novels. In fact, his ‘Tevya the Dairyman’ became an inspiration for the infamous musical ‘Fiddler on the Roof’, which was later adapted into a film. Such was the impact of his distinguished literary creations that his name has been included on an impact crater on the Mercury planet American Celebrities
Playwrights
Short Story Writers
American Men
Male Writers
Childhood & Early Life
Sholem Aleichem was born as Solomon Naumovich Rabinovich on February 18, 1859 in Pereyaslav, Russian Empire (modern-day Ukraine) into a wealthy family of timber merchants to Menachem-Nukhem Rabinovich and Chaye-Esther.
The family relocated to the neighboring Jewish town of Voronkovx when he was young, but a failed business deal forced the family to move back to Pereyaslav.
His childhood was further truncated with his mother’s death due to cholera epidemic, when he was just 13. He started writing at the age of 15, completing a Jewish version of ‘Robinson Crusoe’.
He completed his schooling from a local Russian secondary school, with distinction, in 1876, and became a private tutor to Olga (Hodel) Loev for the next three years. 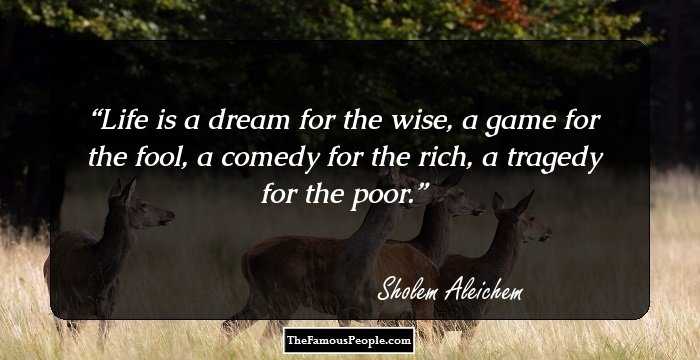 The Hottest Male Celebrities With The Best Abs
Career
In 1879, he became a local reporter for ‘Ha-Tsefirah’, a Hebrew weekly. During 1881 and 1882, he published his articles dealing with Jewish education in the Haskalah-related ‘Ha-Melits’.
Even though he desired to write in Russian or Hebrew, but later switched to Yiddish after analyzing its better accessibility with the Jewish masses.
He released his first Yiddish novel, ‘Tsvey shteyner’ (Two Gravestones), in 1883, under the penname ‘Sholem Aleichem’, a Hebrew greeting meaning ‘peace be upon you’ in Yiddish.
He helmed his first feuilletonistic sequence as a series of documents - ‘Di ibergekhapte briv af der post’ (Letters Intercepted at the Post Office), during 1883-84.
In the coming years, he penned more feuilletonistic sequences, such as ‘An ibershraybung tsvishn tsvey alte khaveyrim’ (A Correspondence between Two Old Friends; 1884) and ‘Kontor gesheft’ (Office Business; 1885).
He authored six full-length fictional works during 1884-89, including ‘Natashe’ (1884, re-titled ‘Taybele’ later on), ‘Sender Blank un zany gezindi’ (Sender Blank and his Family, 1888), and ‘Yosele solovey’ (Yosele the Nightingale, 1889).
He compiled two issues of almanac, ‘Di Yidishe Folksbibliotek’ (The Yiddish Popular Library) during 1888-89, as an inspiration for young Yiddish writers. The third issue could not be published as he lost his entire money in stock gambling.
Due to lack of financial resources, he reduced his literary productivity during the 1890s, producing only one short novel, ‘Meshiekhs tsaytn’ (The Days of the Redeemer) in 1898.
It was only in 1899 that he started earning through his writing with the launch of Yiddish publication ‘Der yud’ and authored some of his most notable works as monologues, holiday narratives, children stories and Kasrilevke tales.
Continue Reading Below
He penned stories for kids that were narrated by an adult through the voice of a child, some being ‘Der zeyger’ (The Clock, 1900), ‘Di fon’ (The Banner, 1900), ‘Afn fidl’ (The Violin, 1902), and ‘Der esreg’ (The Citron, 1902).
His monologues included ‘Gendz’ (Geese, 1902), ‘Funem priziv’ (From the Draft, 1902), ‘Gimenazye’ (High School, 1902), ‘Finf un zibetsik toyzent’ (Seventy-Five Thousand, 1902), and ‘A nisref’ (Burnt Out, 1903), among others.
His holiday stories were based on traditional Jewish holidays and were often published on the eve of the festivals. ‘Af Peysekh aheym’ (Homebound for Passover) released in 1903 was one such poignant creation.
He moved out of portraying stories set amidst small-town and hamlet scenes and adopted Kasrilevke images, focusing on misery and poverty with miracles, as depicted in ‘Ven ikh bin Roytshild’ (If I Were Rothschild, 1902).
He switched to theatre in the hope of meeting his financial needs and staged his first drama ‘Tsezeyt un tseshpreyt’ (Scattered and Dispersed) in 1903 in Warsaw, Poland.
In 1905, he left Russia during the Russian Revolution and went to Lemberg, after which he moved to London via Geneva in 1906, before finally settling in New York City.
He returned to Geneva in 1908 and spent the next three months traveling through Ukraine and Belorussia performing his one-man act. Subsequently, he fell ill with acute hemorrhagic tuberculosis and was hospitalized for two months.
Still financially unsound, he recovered and got support from his fans and friends, during which he wrote lengthy novels, like ‘Der mabl’ (The Deluge), ‘Blonzhende shtern’ (Wandering Stars), and ‘Der blutiker shpas’ (The Bloody Hoax). 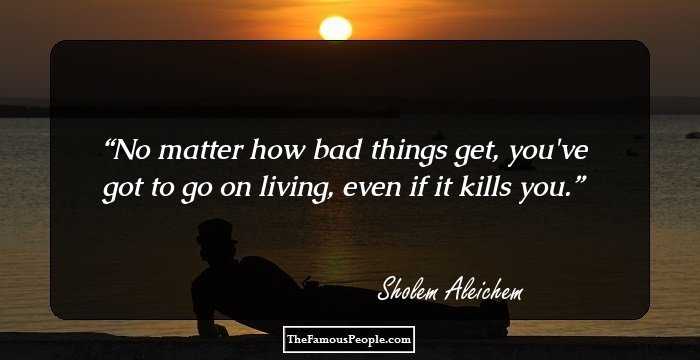 Quotes: You, Living
Continue Reading Below
Major Works
His ‘Stempenyu’, written in 1888, is counted among his best novelistic concepts and literary works, narrating the love story between a musician and religious woman.
Towards the end of the 19th century, he created two literary characters – Menakhem Mendl and Tevye, which formed central figures in several of his stories.
In 1901, he published the monologue ‘Dos tepl’ (The Pot) which eventually became his forme maitresse and led to the release of a series of monologues that blended comedy with tragedy to perfection.
Personal Life & Legacy
He married Olga Loev, daughter of a rich estate owner, in 1883 and relocated to Belaia Tserkov.
The couple inherited the land estate after Olga’s father died in 1885 and shifted to Kiev in 1887. However, he lost the entire wealth in the stock market in 1890 and became bankrupt.
The couple had six children – daughter Ernestina (1884), daughter Lyala (1887), daughter Emma (1888), son Elimelech (1889), daughter Marusi (1892), and son Nochum (1901).
While the family shifted to New York City in 1914, his son Elimelech, down with tuberculosis, stayed back in Switzerland with his sister, Emma, and died in 1915.
He contracted tuberculosis and diabetes and died on May 13, 1916 in New York.
His funeral included around 100,000 mourners - one of the largest funerals in the history of New York City. He was interred two days later at Old Mount Carmel Cemetery, Queens.
His Tevye stories were adapted into theatrical plays during the 1960s across the United States, Israel, and Soviet Russia.
Two monuments, one each in Kiev and Moscow, have been constructed in his honor.
Israel, Soviet Union, Romania, and Ukraine issued postage stamps commemorating this celebrated author. 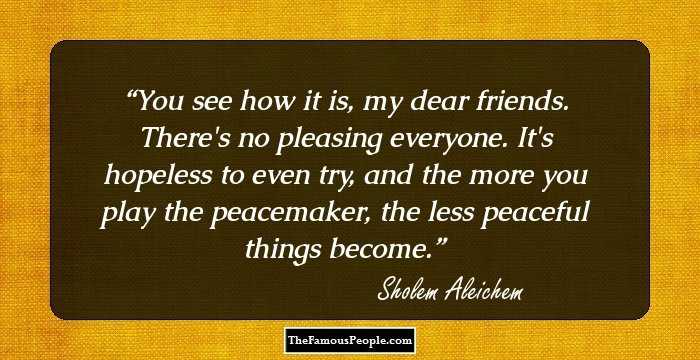 Quotes: You, Friends
Trivia
Apart from writing in Hebrew, Yiddish and Russian languages, he was well-versed with other languages, including Ukrainian and Polish.
He was nicknamed as ‘Jewish Mark Twain’ by the Yiddish and American-English journalists upon his arrival in New York City in 1906.
Recommended Lists:
Writers #2402
You May Like

Quotes By Sholem Aleichem | Quote Of The Day | Top 100 Quotes

See the events in life of Sholem Aleichem in Chronological Order