R. K. Narayan is considered as one of leading figures of early Indian literature in English. He is the one who made India accessible to the people in foreign countries—he gave unfamiliar people a window to peep into Indian culture and sensibilities. His simple and modest writing style is often compared to that of the great American author William Faulkner. Narayan came from a humble south Indian background where he was consistently encouraged to involve himself into literature. Which is why, after finishing his graduation, he decided to stay at home and write. His work involves novels like: ‘The Guide’, ‘The Financial Man’, ‘Mr. Sampath’, ‘The Dark Room’, ‘The English Teacher’, ‘A Tiger for Malgudi’, etc. Although Narayan’s contribution to the Indian literature is beyond description and the way he grabbed foreign audience’s attention for Indian literature is commendable too but he will always be remembered for the invention of Malgudi, a semi-urban fictional town in southern India where most of his stories were set. Narayan won numerous accolades for his literary work: Sahitya Akademi Award, Padma Bhushan, AC Benson Medal by the Royal Society of Literature, honorary membership of the American Academy of Arts and Literature, Padma Vibhushan, etc. Indian Celebrities
Short Story Writers
Indian Men
Libra Writers
Male Writers
Childhood & Early life
R. K. Narayan was born in Chennai, Indian in 1906 in a working class south Indian family. His father was a school headmaster and because his father had to be frequently transferred for his job, Narayan spent most of his childhood in the loving care of his grandmother, Parvati.
It was his grandmother who taught him arithmetic, mythology and Sanskrit. He also attended many different schools in Chennai like, Lutheran Mission School, Christian College High School, etc. He was interested in English literature since he was very young.
His reading habit further developed when he moved to Mysore with his family and there his father’s schools library offered him gems of writing from authors like Dickens, Thomas Hardy, Wodehouse, etc.
In 1926, he passed the university examination and joined Maharaja College of Mysore. After completing his graduation, Narayan took a job as a school teacher in a local school. Soon after, he realized that he could only be happy in writing fiction, which is why he decided to stay at home and write. 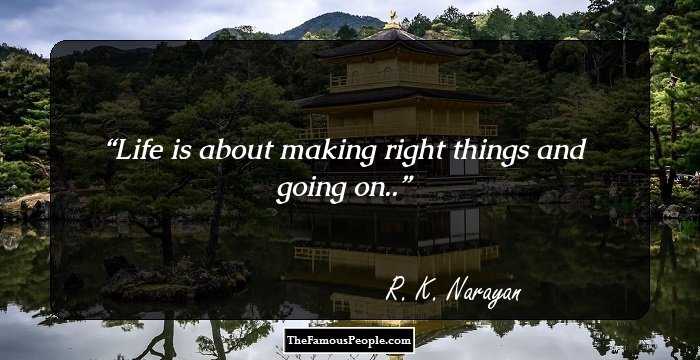 Quotes: Life
Continue Reading Below
Career
Narayan’s decision of staying at home and writing was supported in every way by his family and in 1930, he wrote his first novel called ‘Swami and Friends’ which was rejected by a lot of publishers. But this book was important in the sense that it was with this that he created the fictional town of Malgudi.
After getting married in 1933, Narayan became a reporter for a newspaper called ‘The Justice’ and in the meantime, he sent the manuscript of ‘Swami and Friends’ to his friend at Oxford who in turn showed it to Graham Greene. Greene got the book published.
His second novel, ‘The Bachelors of Arts’, was published in 1937,. It was based on his experiences at college. This book was again published by Graham Greene who by now started counseling Narayan on how to write and what to write about to target the English speaking audience.
In 1938, Narayan wrote his third novel called ‘The Dark Room’ dealt with the subject of emotional abuse within a marriage and it was warmly received, both by readers and critics. The same year his father expired and he had to accept regular commission by the government.
In 1939, his wife’s unfortunate demise left Narayan depressed and disgruntled. But he continued to write and came out with his fourth book called ‘The English Teacher’ which was more autobiographical than any of his prior novels.
After this, Narayan authored books like, ‘Mr. Sampath’ (1949), ‘The Financial Expert’ (1951) and ‘Waiting for the Mahatma (1955)’, etc.
He wrote ‘The Guide’ in 1956 while he was touring United States. It earned him the Sahitya Akademi Award.
In 1961, he wrote his next novel called ‘The Man-Eater of Malgudi’. After finishing this book, he travelled to the United States and Australia. He also gave lectures on Indian literature in Sydney and Melbourne. With his growing success, he also started writing columns for The Hindu and The Atlantic.
His first mythological work ‘Gods, Demons and Others’, a collection of short stories was published in 1964. His book was illustrated by his younger brother R. K. Laxman, who was a famous cartoonist.
Continue Reading Below
In 1967, he came up with his next novel titled ‘The Vendor of Sweets’. Later, that year Narayan travelled to England, where he received the first of his honorary doctorates from the University of Leeds.
Within next few years he started translating Kamba Ramayanam to English—a promise he made to his dying uncle once.
Narayan was asked by the government of Karnataka to write a book to promote tourism which he republished in 1980 with the title of ‘The Emerald Route’. In the same year he was named as the honorary member of the American Academy of Arts and Letters.
In 1980, Narayan was chosen as the member of Rajya Sabha, the upper house of the Indian Parliament and throughout his 6 years term he focused on the education system and how little children suffer in it.
During the 1980s Narayan wrote prolifically. His works during this peiod include: 'Malgudi Days' (1982), 'Under the Banyan Tree and Other Stories', ‘A Tiger for Malgudi’ (1983), ‘Talkative Man’ (1986) and 'A Writer's Nightmare' (1987).
In 1990s, his published works include: ‘The World of Nagaraj (1990)’, ‘Grandmother’s Tale (1992)’, ‘The Grandmother’s Tale and Other Stories (1994)’, etc. 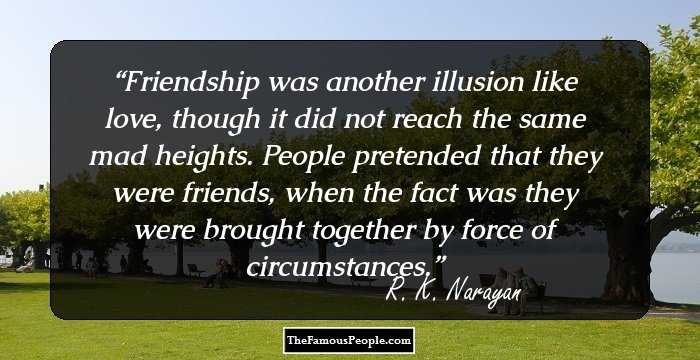 Quotes: Love, Together, Friends, Like
Major Works
R.K. Narayan made India accessible to the outside world through his literature. He will be remembered for the invention of Malgudi, a semi-urban fictional town in southern India where most of his stories were set.
Awards & Achievements
Narayan won numerous accolades for his literary works. These include: Sahitya Akademi Award (1958), Padma Bhushan (1964), AC Benson Medal by the British Royal Society of Literature (1980), and Padma Vibhushan (2001). 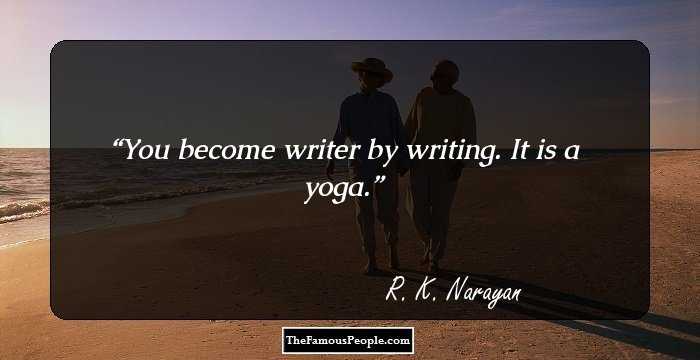 Quotes: You
Personal Life & Legacy
In 1933, Narayan met his future wife Rajam, a 15 year old girl, and fell deeply in love with her. They managed to get married despite many astrological and financial hurdles.
Rajam died of typhoid in 1939 and left a three year old daughter for Narayan to take care of. Her death caused a great shock in his life and he was left depressed and uprooted for a long period of time. He never remarried in his life.
Narayan died in 2001 at the age of 94. He was planning on writing his next novel, a story on a grandfather, just before he expired.
Trivia
He was very fond of the publisher of The Hindu, N. Ram, and used to spend all his time, towards the end of his life, conversing with him over coffee.
Narayan is regarded as one of the three leading English language Indian fiction writers, along with Raja Rao and Mulk Raj Anand.

See the events in life of R. K. Narayan in Chronological Order