Joseph Louis Lagrange was a famous mathematician and astronomer, born in Italy towards the beginning of the eighteenth century. His great- grandfather was French, who settled in Turin after marrying an Italian woman. As a result, Italy considers him to be an Italian while France claims that he was French. As a young man, Lagrange was sent to the University of Turin to study law but by a quirk of fate, he came across a paper by Edmond Halley, the English astronomer-cum-mathematician and became engrossed in it. Subsequently, he began to study mathematics on his own. His fist paper was published at the age of eighteen and by nineteen he became assistant professor of mathematics at the Royal Military Academy, Turin. Later he was invited to Berlin Academy, where he served for twenty years. Thereafter, he joined Académie des Sciences, Paris, on the invitation of Louis XVI and remained there till the end of his career. He was honored by both the aristocracy and the revolutionary governments that took over the reign after the French Revolution. He was made a Senator by Napoleon. Jean Le Rond dâ...
DID WE MISS SOMEONE?
CLICK HERE AND TELL US
WE'LL MAKE SURE
THEY'RE HERE A.S.A.P
Quick Facts

French People
Italian People
French Men
Italian Men
Male Scientists
French Scientists
Childhood & Early Life
Joseph Louis Lagrange was born Giuseppe Lodovico Lagrangia on 25 January, 1736 in Turin, Italy. His father, Giuseppe Francesco Lodovico Lagrangia, worked as a Treasurer in the Office of Public Works and Fortifications in Turin. His mother, Teresa Grosso, was the daughter of a doctor from nearby town of Cambiano.
Lagrange was the eldest of his parentâ€™s two surviving children. As a young man, he often used the French form of his family name, calling himself Lodovico LaGrange.
He enrolled at the University of Turin to study law.
Initially he did not show much interest in mathematics. In fact, he found Greek geometry rather dull and was more interested in Classic Latin. At the age of seventeen, he accidentally came across a paper on the use of algebra in optics by Edmond Halley. It opened a new world for him.
Alone and unaided, he began to study mathematics and within a year, became a skilled mathematician. On 23 July 1754, he published his first mathematical work in the form of a letter written to Italian mathematician Giulio Fagnano. In this work, he drew an analogy between the binomial theorem and the successive derivatives of the product of functions. Unfortunately, a month after the paper was published, he realized that the work had already appeared in correspondence between Johann Bernoulli and Leibniz.
Lagrange was greatly upset about this as he thought he would now be accused of plagiarism. He now started working even harder so as to produce genuine results.
Working on the problem of tautochrone, he made some important discoveries, which in later years contributed to the study of calculus of variations. On 12 August 1755, he sent the result of his work to Swiss mathematician, Leonhard Euler. 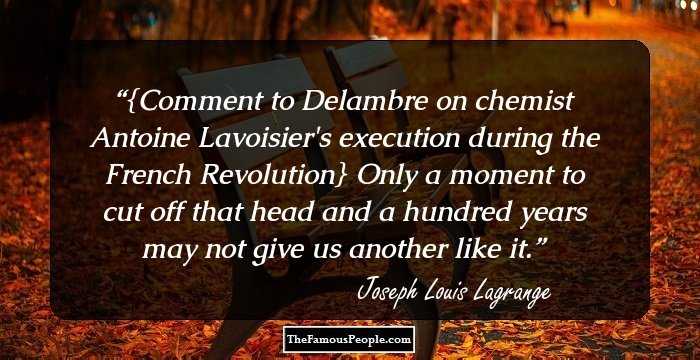