Advanced Search
Augustin-Louis Cauchy was a French mathematician. He was famous for the countless contributions he made to the domain of mathematics. He made special contribution to mathematical analysis and the theory of substitution groups. For a brief period, he served as a military engineer for Napoleon’s English invasion fleet. He wrote many books that cover a wide area of mathematics and mathematical physics. He authored around eight hundred research articles. His paper on definite integrals acted as the basis of the theory of complex functions. Due to his praiseworthy contribution to wave propagation , which is an important part of hydrodynamics, he received the prestigious grand prix from the Institute of France. His theories on functions of complex variables have played substantial part in subjects ranging from applied mathematics to aeronautics. His significant papers on error theory act as valuable asset for the domain of science. Cauchy was the first mathematician who developed definitions and rules for mathematics. He introduced the definitions of the integral and rules for series convergence. As a person he was a God-fearing, earnest Roman Catholic and a strict Bourbon royalist. He was actively involved with Institut Catholoque and Ecole Normale Ecclesiastique. Marquis de Cond...
DID WE MISS SOMEONE?
CLICK HERE AND TELL US
WE'LL MAKE SURE
THEY'RE HERE A.S.A.P
Quick Facts

French People
Leo Scientists
Male Scientists
French Scientists
French Mathematicians
Childhood & Early Life
Augustin-Louis Cauchy was born on 21 August 1789 in Paris, France, as the son of Louis Francois Cauchy, a senior French government officer and Marie-Madeleine Desestre. He had two brothers – Alexandre Laurent Cauchy and Eugene Francois Cauchy.
His father lost his job due to the French Revolution and the family moved to Arcueil; Cauchy received his early education there. However, his family returned to Paris after the political atmosphere calmed down.
Cauchy took admission at the best secondary school of Paris, the École Centrale du Panthéon. There he won several prizes in Latin and Humanities.
He chose to opt for engineering and cleared the entrance examination with second rank. He finished his engineering course from Ecole Polytechnique in 1807.
He then attended École des Ponts et Chaussées (School for Bridges and Roads) and completed his graduation in civil engineering. 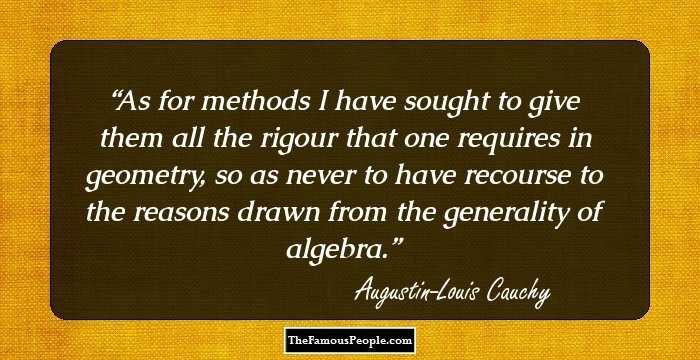 Quotes: Never, I
Continue Reading Below
Career
*Cauchy became a military engineer and accepted a job in Cherbourg in 1810 where he worked on the harbors and fortifications for Napoleon’s English invasion fleet.
Along with his busy engineering career he also managed to prepare three mathematical manuscripts, which he submitted to the Première Classe (First Class) of the Institut de France. Two of these were accepted.
His engineering job, however, did not hold his interest for long. He returned to Paris in 1812, in the hopes of obtaining a mathematical position. Even though he did not resign from his job, he spent the next three years on unpaid sick leave, working on mathematical research.
The 1810s marked a turbulent period in France. In 1815, Napoleon was defeated at Waterloo, and Louis XVIII was installed as the new king. Under his reign the Académie des Sciences was re-established in March 1816 and Cauchy was offered a position there. However his acceptance of the job earned him many enemies.
Over the ensuing years he published many important treatises including ‘Coursd’analyse de l’École Royale Polytechnique’ (1821), ‘Résumé des leçons sur le calcul infinitésimal’ (1823), and ‘Leçons sur les applications du calcul infinitésimal à la géométrie’ (1826–28).
In 1830, France underwent another revolution and King Charles X went into exile. Cauchy also left the country at this time. He returned to Paris after a few years in 1838.
He was elected to the Bureau des Longitudes in 1839. However he refused to swear an oath of allegiance because of which the king refused to approve his election. Thus he could not become a formal member of the Bureau and nor could he receive any payment.
He still performed his research on celestial mechanics and presented a dozen papers on this topic to the Academy in 1840. In the 1840s he also became involved with the École Normale Écclésiastique, a school in Paris run by Jesuits.
Major Works
Augustin-Louis Cauchy is best known for single-handedly developing Complex analysis, traditionally known as the theory of functions of a complex variable. This branch of mathematical analysis investigates functions of complex numbers, and is useful in many branches of mathematics, as well as physics.
Personal Life & Legacy
In 1818, Cauchy married Aloise de Bure, member of a family of publishers and booksellers who published majority of his works. The couple had two daughters: Marie Francoise Alicia and Marie Mathilde. Augustin.
Cauchy died on May 23, 1857.
No other mathematician except Leonhard Euler left behind a bigger body of work than Cauchy.