John Winthrop was an English Puritan Lawyer, best known as one of the founders of the ‘Massachusetts Bay Colony,’ one of the biggest settlements in New England. He sailed to North America from England with a large group of immigrants and served as the first governor of the colony. His vision served as a blueprint for other colonies in the New England to thrive. Born in Suffolk, England, into a wealthy family, he was initially home schooled. The religious discussions of his parents when he was young got him interested in theology at an early age. He attended ‘Trinity College’ for higher education. He studied law and later worked as a government lawyer in London. He was also a land owner and lived a comfortable life. He was one of the pioneers behind the ‘Massachusetts Bay Company’ and with a large group of colonists sailed to the New World in 1630. He became the governor of the Massachusetts Bay Colony in the same year and ruled as an authoritarian. He was also a highly religious man, which was also a key element in his way of governing the colony. American People
British People
Intellectuals & Academics
American Men
British Men
Male Leaders
Childhood & Early Life
John Winthrop was born in Edwardstone, Suffolk, England, on January 12, 1587. Some historians also claim that he was born in 1588. John’s parents were wealthy. His father, Adam Winthrop, was a lawyer and a landowner who also ran his own textile business. John’s mother, Anne Winthrop, also hailed from a rich family of landowners. John was raised with three sisters.
When John was still young, his father became a director at the ‘Trinity College’ of the ‘Cambridge University’ and the family relocated there and later shifted to Groton Manor, his uncle’s mansion, after he moved to Ireland.
John Chaplin was appointed as his private tutor; he was home schooled for the most part of his childhood. It is also believed that he also attended a Grammar school at Bury St. Edmunds.
John’s father was an extremely religious man and used to have many such discussions with his friends. This is how John became interested in the study of theology. In December 1602, John enrolled at ‘Trinity College’ to study law.
John got married at a very early age and dropped out of college. He began practising law in London, which got him in touch with many elite businessmen of England. In 1613, Adam Winthrop, his uncle, transferred all his holdings in Groton to John, making him the Lord of the Manor at Groton.
One of the most important aspects of his teenage years was his deep interest in religious studies. He studied religious books and scriptures deeply and trained himself to become a fully-fledged ‘Puritan.’ He was somehow convinced that he was selected by the God himself as a ‘saint’.
This also led John to become a social worker. He actively participated in social causes and believed that the world is wicked and only religion can be its true salvation.
He was a county squire with a huge estate and land. He led a comfortable life in England until the late 1620s. It was the time when the King of England, Charles I, got married to a catholic and things looked very disheartening for the Puritans and other religious minorities.
In addition to this, England was also going through a very difficult economic slowdown and John had already lost his government job for being a Puritan. His lands and estates had also shrunk considerably, but John was determined to practise his religion, so he began to explore ways for a better life for himself. 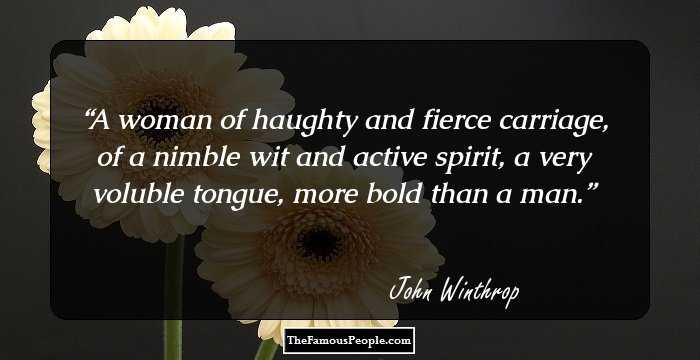 The Hottest Male Celebrities With The Best Abs
Massachusetts Bay Colony
Observing England’s hostility towards Puritan beliefs, John Winthrop somehow became convinced that God’s wrath will befall England soon. He decided that he and other Puritans needed some other settlement to thrive. There were many other rich Puritans who believed the same. It led to the formation of the 'Massachusetts Bay Company' in 1628.
Although John never had a direct role in founding the company, he became its strong supporter in 1629 when Charles I began his crackdown on the Puritans. When Puritans decided to sail to the New World, King Charles I thought that it was just a commercial voyage to Americas.
John and other rich Puritans signed the 'Cambridge Agreement' and decided to establish a new Puritan Colony in New England. John donated 400 pounds to make the voyage a success and sailed to Americas with a large group of Puritans aboard the ship 'Arbella' in April 1630. However, a few months prior to the sailing, John had already been named governor of the new colony that was to be established.
John and other Puritans founded the colony on the 'Massachusetts Bay' and 'Charles River' and it was called the 'Massachusetts Bay Colony.'
In his role as governor, John earned massive respect from his people. He was one of the least radicals among the Puritans. He worked toward banning the highly conservative Puritan rituals, such as veiling of women. Under his leadership, the executions were also reduced to a bare minimum. However, he is strongly criticized to this day for taking the lands from the native Americans, claiming that they had no ‘civil right’ to it.
During the first few years as governor, John aimed towards establishing townships that were well organized. Each of the town was provided their own church. Boston eventually became the capital of 'New England' and John worked from there. It was also the main port of Massachusetts.
There were, however, many critics of John and his way of governing the colonies. Many people were opposed to the State-Church relationship that defined the settlements. Many colonists from the 'Massachusetts Bay Colony' fled away to Connecticut.
John wanted to establish an ideal Christian community on the basis of the doctrinal beliefs. This led to the infamous trial and eventual banishment of Anne Hutchinson from the colony, whom John referred to as ‘American Jezebel.'
John was also not kind on the native Americans who lived around the colonies. He referred to them as 'Godless People' and claimed that the natives were hit by catastrophes, such as fatal diseases because of their godless ways of living. A smallpox outbreak had hit them which swept away most of the native population and John thought it was God’s wish to give their land to the colonists.
John was a highly respected political figure and was an authoritarian when compared to the modern world standards. He was also known as a strong critic of democracy. For the 20 years that he spent in the colony, he was governor for twelve. His successful run as a conservative governor proved ideal for the establishment of neighbouring colonies. 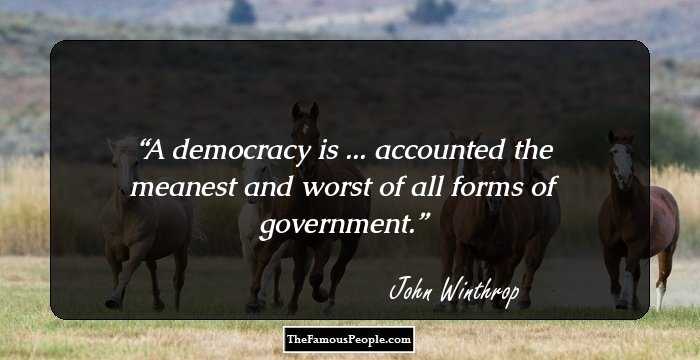 Family, Personal Life & Death
John Winthrop married four times in his life. He married for the first time as a teenager; he got married to Mary Forth in 1605 and the couple stayed together until her death in 1615. John then married Thomasine Clopton in 1615, and following her death a year later, he got married to Margaret Tyndal. After Tyndal's death, he married Martha Rainsborough.
John passed away on March 26, 1649, from natural causes. He was survived by his wife, Martha Rainsborough, and five children.
Recommended Lists:
Leaders #1089
Lawyers & Judges #227
You May Like

See the events in life of John Winthrop in Chronological Order