John Muir, also known as the ‘Father of National Parks’, was a famous American conservationist, writer, naturalist and explorer, who promoted the conservation of wildlife in the United States of America and around the world. His books and essays narrate his personal experiences with nature and encourage people to support his cause of preserving the environment. Millions of his books were sold around the world and his fervent activism has helped in the preservation of the Sequoia National Park and the Yosemite Valley. He also founded the ‘Sierra Club’, which to date is one of the most important conservation organizations in the United States of America. Towards the end of his life, he devoted most of his time in efforts towards safeguarding the Western forests and even implored the U.S. Congress to help pass the National Park Bill. Along with the support of politicians, leaders and congressmen, he mobilized opinions to help preserve enormous wildlife areas. His writings are frequently discussed by a number of modern day conservationists today and inspire countless individuals who are looking to follow his footsteps. Hamilton O. Smith
DID WE MISS SOMEONE?
CLICK HERE AND TELL US
WE'LL MAKE SURE
THEY'RE HERE A.S.A.P
Quick Facts

American Celebrities
Scottish Celebrities
Biologists
Geologists
American Men
Scottish Men
Childhood & Early Life
John Muir was the third of the eight children born to Ann Gilrye and Daniel Muir, in Dunbar, Scotland.
When he was a young boy, he enjoyed hunting birds’ nests and re-enacting Scottish battles. He had a very strict and religious upbringing and was able to recite the whole of the New Testament and the Old Testament by-heart, at the age of 11.
As he was a spiritual child from the beginning, he was also fond of nature. This led him to study botany, chemistry and the life-sciences at the University of Wisconsin-Madison. Although he never graduated from the university, he had acquired enough knowledge to help him with his works.
In order to avoid being pressganged in the military, he spent the summer of 1863 wandering through the swamps around Lake Huron and collecting plants. Till the next five years, he found work at a sawmill along with his brother. It was during this time, he penned ‘A Thousand-Mile Walk to the Gulf’.
After a near-death experience, he relocated to Havana and spent his time visiting botanical gardens and studying shells. He then boarded a ship to New York and reserved passage to California, where his life as an explorer would begin. 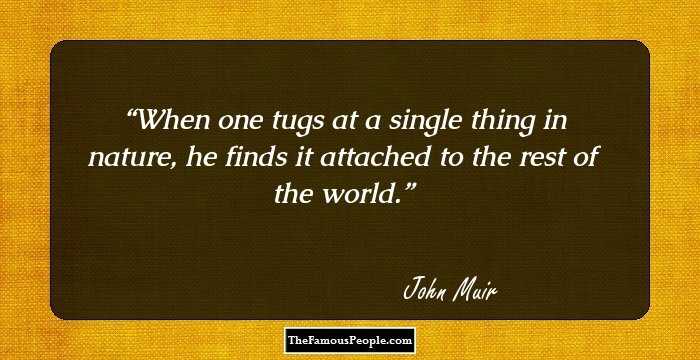 Quotes: Nature
Continue Reading Below
Later Life
He visited Yosemite and worked as a shepherd, climbed mountains and hiked the Bloody Canyon to Mono Lake. Since he loved to invent things, he designed a water-powered mill and built a cabin along Yosemite, where he lived for two years.
In 1872, after an earthquake woke Muir in the morning, he studied the rockslides triggered by the earthquakes and studied talus piles, unlike the other residents of the area, who fled.
From 1873 to 1874, he studied plant life in the Yosemite area and also indulged himself in field studies along the western border of the Sierra and the isolated groves of the Giant Sequoia.
He travelled to Alaska in 1879 and became the first person to explore the Glacier Bay. This was later named after him and is now known as the ‘Muir Glacier’. He returned to explore Southeast Alaska even further in 1880.
In 1888, he travelled to Mt. Rainier to recover from ill health. During this time, he wrote, ‘Ascent of Mount Rainier’. Two years later, he submitted articles, ‘The Treasure of the Yosemite’ and ‘Features of the Proposed National Park’ to the Century Magazine, which enabled the U.S. Congress to pass the conservation bill, based on his recommendations in the two articles.
In 1892, Muir co-founded the ‘Sierra Club’ for mountain enthusiasts. Muir was made the club’s president, a post he held till his death.
Three years later, the club discussed the founding of ‘national forest reservations’, which came to be known as ‘National Forests’. In 1903, President Roosevelt visited the Yosemite along with Muir. Even before they could step into the park, Muir managed to influence Roosevelt that it would be better for the park to be under federal control rather than state control, due to their negligence.
Thus, in 1906, the ‘Sierra Club’ became instrumental in transferring the state control of ‘Yosemite National Park’ to federal control. Around this time, the Congress also relocated the Mariposa Grove and the Yosemite Valley into the park.
He documented his wildlife experiences at the Sierra and more in the book, ‘First Summer in the Sierra’, in 1911 and spent the rest of his time reading the works of Ralph Waldo Emerson, studying geology and hiking. Two years later, he authored the book, ‘The Story of My Boyhood and Youth’.
Continue Reading Below 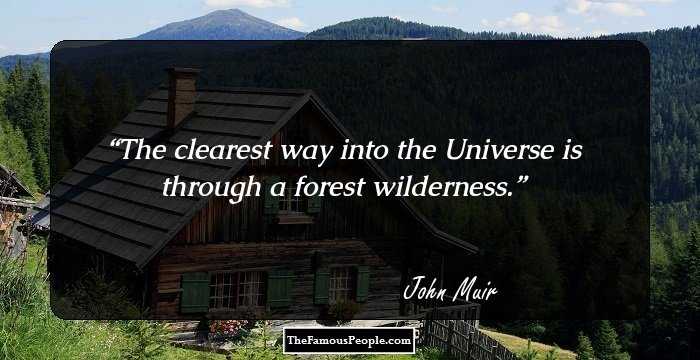 Quotes: Nature
Major Works
Throughout his life, his written works played a dominant role in getting his views across and earning support for his cause. Of these written works, his essays were of great interest to the general public and earned him a great deal of admiration. Today, a number of his essays are even available online in order to reach out to a wider audience. These include; ‘Alaska: The Discovery of Glacier Bay’, ‘Living Glaciers of California’, ‘The New Sequoia Forests of California’, ‘Features of the Proposed Yosemite National Park’ and the ‘The Wild Sheep of the Sierra’.
Awards & Achievements
He was posthumously inducted into the ‘California Hall of Fame’ on December 6, 2006. 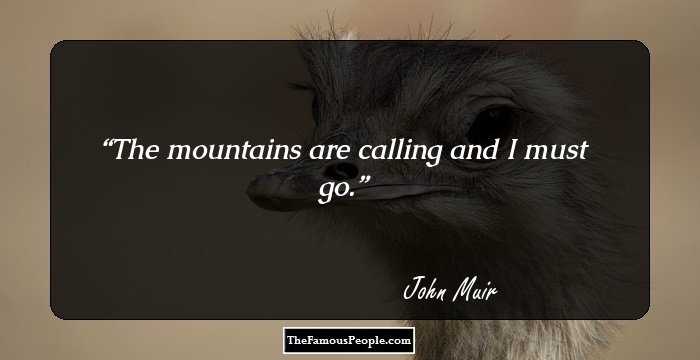 Quotes: Nature, I
Personal Life & Legacy
At the age of 40, he married Louisa Strentzel and the couple went on to have two daughters. It is believed that he was a loving husband and a doting father and would often take his daughters on his trips.
He passed away due to pneumonia in Los Angeles and at the time of his death, he was survived by his daughters and 10 grand-children.
Today, the ‘Sierra Club’ has over 1.3 million members and has helped establish a number of wildlife reserves.
Muir’s image can be seen on a 5-cent stamp issued on April 29, 1964, designed by Rudolph Wendelin.
Trivia
‘Muirite’ a mineral, is named after this famous American naturalist, author and wildlife preserver.
Recommended Lists:
Scientists #158

See the events in life of John Muir in Chronological Order