Henry Adams was a renowned American academician and journalist. He was also a historian and novelist, well-known for his books like “Democracy: An American Novel” and "Mont-Saint-Michel and Chartres”. As the author of his autobiography "The Education of Henry Adams", he received Pulitzer Prize posthumously in 1919. Through this book, he discussed about the possibility of the application of scientific method to the study of history. This view of Adam is better known as 'Dynamic Theory of History'. His book "Mont-Saint-Michel and Chartres" contains his in-depth analysis of thirteenth-century Christianity. Hailing from a family with strong political background, this Harvard educated personality was a correspondent of “Boston Daily Courier”. As the private secretary of his father, who was a Minister of Great Britain, he learnt a lot about various social and political issues across the world. As an assistant professor at Harvard University, he introduced several necessary systems for the development of university education. He was a strong supporter of Cuba's independence. As a freelance political journalist, his works regarding financial issues concerning America earned him critical acclaim. Moreover, a number of articles written by him reflect his opinion regarding the Panic of 1893 and gold standard. Lauren Graham
Historians #89
Novelists #595
Writers #1951
Continue Reading Below
DID WE MISS SOMEONE?
CLICK HERE AND TELL US
WE'LL MAKE SURE
THEY'RE HERE A.S.A.P
Quick Facts

American Celebrities
Historians
American Men
Harvard University
Male Writers
Childhood & Early Life
Belonging to one of the well-known families of Boston, Massachusetts, Henry Adams was the son of Charles Francis Adams Sr. and Abigail Brooks. His father was a lawyer and politician.
Since his childhood days, he used to spend a considerable amount of time in the library of his family. Being a voracious reader, this library was like a treasure trove for him. It helped him to enrich his knowledge in various subjects like Greek and Roman literature, politics, physics, mathematics and astronomy.
In 1850, as part of a tour with his father, he visited Maryland, Virginia and Washington, D.C .This tour made him aware about the issue of slavery.
He graduated from E.S. Dixwell, a private Latin School, in Boston in June 1854. In the same year, he took admission at Harvard University.
He graduated with distinction from Harvard University in 1858. After that, he visited Germany where he attended Berlin University to study law. For two years, he travelled in various parts of Germany, Italy, Austria and Switzerland. 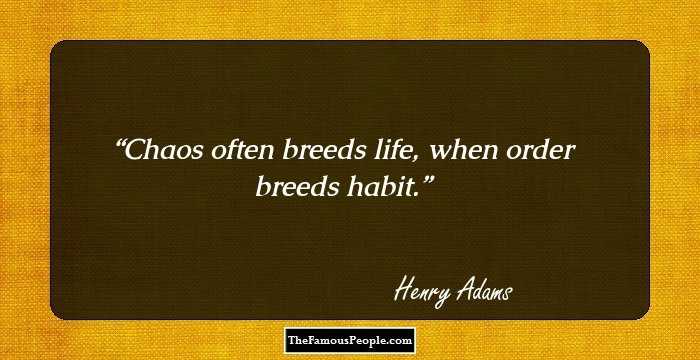 The Hottest Male Celebrities With The Best Abs
Career
When his father became a Minister to Great Britain, Henry started working as his father’s private secretary. He served in this position from 1861 to 1868. During his stay in Washington, he also acted as a correspondent of “Boston Daily Advertiser”.
After that, he visited England where he worked as a correspondent of “The New York Times”. At that time, he penned several essays through which he criticized various policies of Congress and the system of free trade.
He returned to America in 1868 and started working as a lobbyist. Simultaneously, he also worked as a freelance political journalist.
At that time, a number of journals published his articles related to American finance and the New York gold conspiracy. These writings brought him recognition as a reformist. Journals like “The Nations” and the “New York Evening Post” used to publish his articles.
In 1870, he joined Harvard University as assistant Professor of History. During his six years tenure at Harvard, he taught subjects like European and American history and medieval English. At the same time, he also worked as an editor of the “North American Review”. He left his job at Harvard University in 1877.
In 1884, his work “Esther: A Novel” appeared under the pseudonym Frances Snow Compton. This comic story is about a young socialite.
His visit with Marau Taaroa acted as an inspiration for his book “Memoirs of Marau Taaroa, Last Queen of Tahiti”, published in 1893.
'In 1907, he circulated some copies of his autobiography “The Education of Henry Adams", at his own expense.
In 1913, he published “Mont Saint Michel and Chartres: A Study of Thirteenth - Century Unity”.
Continue Reading Below 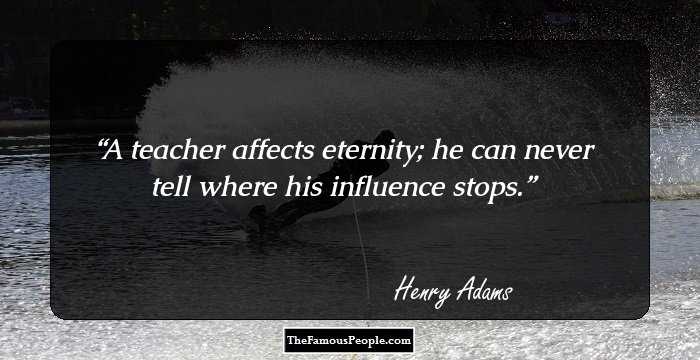 Quotes: Never
Major Works
He anonymously published “Democracy: An American Novel” in 1880. In this book, he represented the misuse of political power through several fictitious characters. This book received commercial success.
He published “History of the United States of America 1801-1817” between 1889 and 1891. Running in 9 volumes, it presents a vivid account of administrative systems of Presidents Thomas Jefferson and James Madison. Written in simple language, this book criticizes Jefferson for his role regarding the Constitutional problems with the Louisiana Purchase. Through this book, Adams also blamed Madison for his conduct of the War of 1812.
Published in 1904, his book "Mont-Saint-Michel and Chartres" presents thirteenth-century Christianity through the architectural design of two famous cathedrals of France.
Awards & Achievements
His memoirs, 'The Education of Henry Adams', which were published posthumously, won the Pulitzer in 1919. 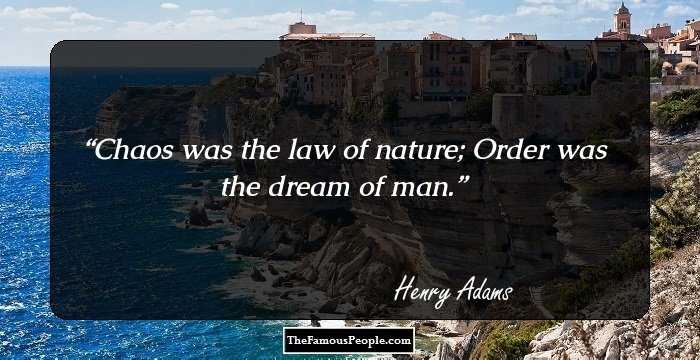 Personal Life & Legacy
He was the grandson of the sixth President of the U.S. John Quincy Adams and great-grandson of John Adams, the second President of the U.S.
He married Marian Hooper on 27 June 1872. She committed suicide in 1885.
In 1912, he became partially paralysed on account of suffering from cerebral thrombosis.
He passed away at the age of 80 in Washington, D.C.
Trivia
As a professor at Harvard University, this great academician is credited for introducing seminar system at the university. He was the first who put stress on the importance of evaluation by students.
Recommended Lists:
Intellectuals & Academics #635
You May Like

Quotes By Henry Adams | Quote Of The Day | Top 100 Quotes

See the events in life of Henry Adams in Chronological Order