(American Author Known for His Thrillers, Mysteries and Romance Novels)

Advanced Search
James Patterson, a former chief executive of advertising agency ‘J Walter Thompson’, North America, is one of the bestselling American authors. He is famous for his crime thrillers and romance novels. Patterson began writing in real earnest some 20 years after retiring from his advertising career. His ‘Alex Cross’, ‘Women's Murder Club’, ‘Michael Bennett’, ‘Maximum Ride’, ‘NYPD Red’, ‘Daniel X’, ‘Private’, and ‘Witch and Wizard’ series of books, as well as innumerable stand-alone novels, have sold more than 300 million copies making him the highest-paid author in the country. He is also the first author to have sold more than one million e-books. One of the most prolific writers worldwide, he is recognized by the ‘Guinness Book of World Records’ for having the maximum number of books on The New York Times' best-seller list. Patterson has emerged as a passionate advocate of reading and books, donating millions of dollars from his personal wealth to teachers’ colleges, universities, school libraries, students, and independent bookstores. The ‘National Book Foundation’ has awarded the prestigious ‘Literarian Award’ for his efforts “to make books and reading a national priority.” Lauren Graham
22nd March In History
DID WE MISS SOMEONE?
CLICK HERE AND TELL US
WE'LL MAKE SURE
THEY'RE HERE A.S.A.P
Quick Facts

American People
American Men
Manhattan College
Vanderbilt University
Male Writers
Childhood & Early Life
James Brendan Patterson was born in Newburgh, New York on March 22, 1947 to Charles and Isabelle Patterson. Charles was an insurance broker while Isabelle was a schoolteacher.
When James was quite young, the entire family moved to Boston, where James lived with his parents, three younger sisters, and his grandmother in a poorhouse.
In high school, James was a good student though he never enjoyed reading at that time. It was while he was studying for his B.A. in English in Manhattan College in the Bronx that he took up reading and after being encouraged by family and friends, commenced writing, a pastime that became his primary obsession for the rest of his life. As a teenager, James took up employment as an orderly working the night shifts in ‘Mclean Hospital’ in Belmont to pay the college fee.
After graduating from college, he enrolled at Vanderbilt University in Tennessee for a master’s degree and Ph.D. in English literature. However, he quit the course after just one year because he thought his studies would kill his love of reading and the Ph.D. itself had little value to him.
Around 1971, he went to New York City and after he was refused a cab driver’s job because of his long hair, joined ‘J. Walter Thompson’ (JWT), a leading advertising agency as a junior copywriter. Enthused by books like ‘The Exorcist’ and ‘The Day of the Jackal’, he took to writing commercial fiction in the mornings before going to the office and in the lunch break at the office.
It was at the age of 26 that he wrote his first book, ‘The Thomas Berryman Number’ that got rejected by 31 publishers before being published by ‘Little, Brown and Company’ in 1976. He was awarded the ‘Edgar Allan Poe Award’ for the best first novel from the ‘Mystery Writers of America’. 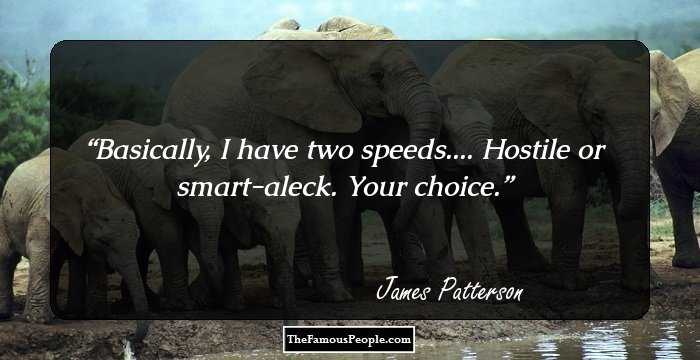 Quotes: I
Continue Reading Below
Career
Enthused by the success of his first book, Patterson wrote several novels thereafter, like ‘’Season of the Machete ‘(1977), ‘See How They Run’ (1979), and ‘Virgin’ (1980); all which failed to enamor both the critics and the readers.
Devastated by the death of his girlfriend, Jane, due to a brain tumor, he developed high blood pressure and other medical conditions and quit writing to focus on his job. Within a couple of years, he rose to become the creative director of ‘JWT’.
When Patterson resumed writing, he changed his writing style. He worked on ‘The Midnight Club’ by first making a draft of the plot with all the important events and then fleshed out the story with description and detail while improving the language. Pleased with this new style of “colloquial storytelling”, by the early ‘90s, he was writing in an unembellished style streamlined WITH fast-paced plots in small chapters.
He achieved his first big success with his novel ‘Along Came a Spider’ in 1993. The book featuring Alex Cross, an African-American homicide detective, topped the bestseller charts not only due to its racy plot but also due to Patterson using all his advertising experience to create a TV commercial to promote the book, a step that was completely out of the ordinary in the publishing industry of those times. An initially taken-aback ‘Little, Brown and Company’ came on board and agreed to share half the cost of production and telecast of the commercial with Patterson footing the other half.
In 1996, even though Patterson was the chairman of ‘J Walter Thompson’, he quit the organization to concentrate on his writing. In addition to the ‘Alex Cross’ crime novels that had caught the fancy of the readers, many of which, have also been made into films, Patterson has written many other crime novel series like ‘Women's Murder Club’ series, ‘Michael Bennett’ series, ‘Private’ series, and ‘NYPD Red’ series.
He co-authored a book for the first time in 1996 when he teamed up with Peter De Jonge to write ‘Miracle on the 17th Green’. Even though he has been criticized, Patterson has regularly collaborated with other authors.
Many of the titles in the ‘Women’s Murder Club’ series that feature a quartet of enterprising women professionals solving crimes have been co-written. The books also provided the basis for a TV series telecast in 2007-08.
In addition to his staple of crime fiction series, Patterson has regularly written stand-alone novels; while many are thrillers and crime fiction penned in the best traditions of the genres, books like ‘Sundays at Tiffany’s’ (2008), co-written with Gabrielle Charbonnet, were a supernatural romance, ‘The Christmas Wedding’ (2011), co-authored with Richard DiLallo, a family drama, and ‘The Murder of King Tut: The Plot to Kill the Child King’ (2009), written in collaboration with Martin Dugard, a historical non-fiction.
In 2005, James Patterson wrote the first of the ‘Maximum Ride’ series of science-fiction novels after realizing that his son, Jack, did not show much of an interest in reading. The series was targeted at young adults but had an appeal for readers of all ages.
Continue Reading Below
Encouraged by the success of ‘Maximum Ride’, he subsequently created a number of series aimed at young readers like ‘Confessions’, ‘Daniel X’, ‘Middle School’, ‘I Funny’, ‘Treasure Hunters’, ‘House of Robots’, ‘Witch and Wizard’ as well as a number of stand-alone books. The ‘Maximum Ride’, ‘Daniel X’, and ‘Witch & Wizard’ series were also very successfully adapted as graphic novels.
In June 2018, ‘The President Is Missing’, co-authored by Patterson and the former American president, Bill Clinton was published and topped all the bestseller charts immediately. The first week sales of more than 250,000 copies was the biggest debut by an adult fiction book since ‘Go Set a Watchman’, the sequel to ‘To Kill a Mockingbird’ in 2015. 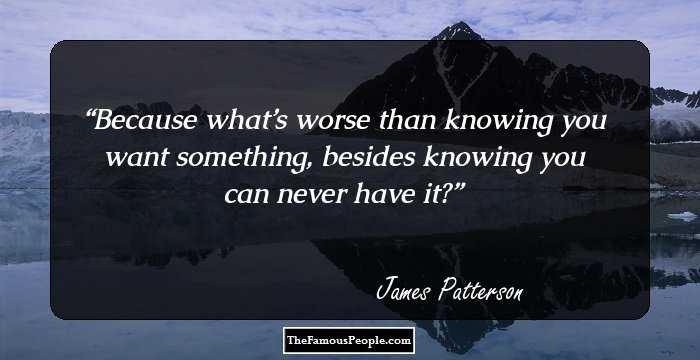 Quotes: You, Never
Major Works
‘Along Came a Spider’ (1993), the first ‘Alex Cross’ book was Patterson’s first major success
‘The President Is Missing’ (2018) was a big hit and topped the The New York Times Best Seller list.
Personal Life & Legacy
James Patterson married Susan who also worked in JWT, in 1977, and the couple settled in Florida, where they still spend most of their time. Their son, Jack was born in 1998.
He established the ‘James Patterson PageTurner Awards’ in 2005 that had a mission of funding schools, educators, companies, and other institutions that implement effective and original ways of spreading the excitement of reading and books.
The James Patterson PageTurner Awards were, however, put on hold in 2008 as Patterson wanted to focus on a new initiative, ‘ReadKiddoRead.com’ aimed at assisting parents, teachers, and librarians to finding the best books to encourage children of different age and interest groups to read.
He has donated millions of books to schools, youth programs, and U.S. soldiers as well as a significant part of his personal wealth to public school libraries, independent bookstores, his alma mater, Manhattan College and the Vanderbilt University, and University of Wisconsin, his wife’s alma mater. He has also established over four hundred ‘Teacher Education Scholarships’ at various colleges and universities.
‘JIMMY Patterson’, a children’s book imprint at ‘Little, Brown’ was launched in 2015 with the mission of turning kids into lifelong readers and to serve parents, teachers, librarians, and booksellers. 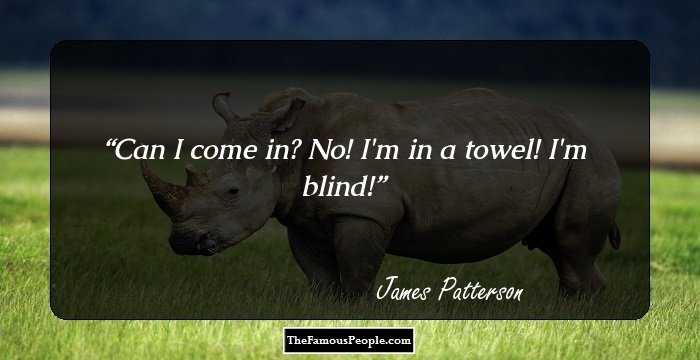 Quotes By James Patterson | Quote Of The Day | Top 100 Quotes

See the events in life of James Patterson in Chronological Order