Lauren Helen Graham is an American actress and producer of Irish ancestry. She is an avid reader for whom books play a crucial role in breaking monotony when life gets too dreary. She never forgets to carry a good book before heading to the studio. She is a crossword puzzle freak and does at least one puzzle a day. As a child, she traveled a lot with her father. During her elementary school years she discovered her flair for acting and consequently did a good deal of theatre throughout her Graduation. Soon she had a lot of commercials and sitcoms in her kitty. But her major breakthrough role came in the form of main protagonist Lorelei Gilmore, a single mother of a teenage daughter Rory, in famous television series ‘Gilmore Girls’ ; and received several rave reviews for it. After that, she never looked back and kept on climbing the ladder of success. Another big break of her life came in the form of Sarah Braverman’s role in a famous American comedy-drama television series, ‘Parenthood.’ She won many laurels for it. Meghan Markle
16th March In History
DID WE MISS SOMEONE?
CLICK HERE AND TELL US
WE'LL MAKE SURE
THEY'RE HERE A.S.A.P
Quick Facts

Graham was born on March 16, 1967, to Donna Grant, a fashion buyer, and Lawrence Graham, a candy industry lobbyist who is the present President of National Confectioners Association.

Graham’s parents split-up when she was just 5, and she moved to Washington D.C. along with her father, who became a Congressional Staffer there. She grew up in Northern Virginia in close proximity to Washington D.C.

Horse-riding was her leisure pursuit, but soon she took to acting, perfecting this art at Langley High School’s drill team.

She gained an Actor’s Equity Card in 1988, after being a part of Summer Stock at the Barn Theatre in Augusta, Michigan for two years. In the same year, Graham graduated from Bernard College of Columbia University, New York, with a Bachelor of Arts degree in English Literature.

After shifting to Texas in 1992, she earned a post-graduation degree in Acting Performance from Southern Methodist University, Dallas. 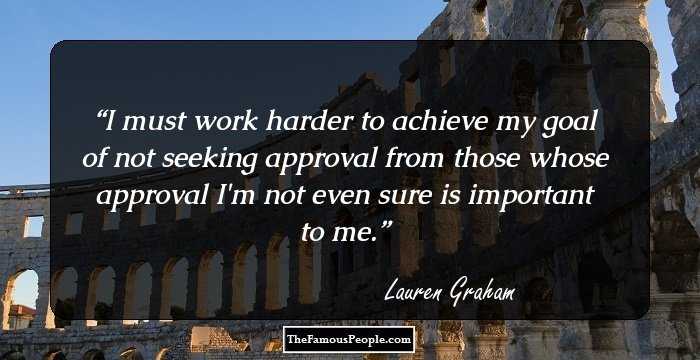 Quotes: Me, I
Continue Reading Below
Career
After finishing her formal education, Lauren moved back to New York City where she worked as a waitress. Although her first salaried job came later as a ‘Striker’, the mascot of US-based 1994 FIFA World Cup.
In 1995, she moved to Hollywood, California where she did various commercials for products such as Dimetapp and Lean Cuisine and hosted free preview weekends on ‘The Movie Channel.’
Her early works encompass many guest-starring and co-starring roles on prime-time television, including few of the failed sitcoms such as ‘Townies’, ‘Lush Life’ and ‘M.Y.O.B.’
Between 1996 and 1997, she became a regular guest star at many hit shows of NBC, such as ‘3rd rock from the sun’, ‘Caroline in the City’, ‘Law and Order’ and ‘NewsRadio.’
In 2000, she got her breakthrough role as Lorelei Gilmore of ‘Gilmore Girls’, an American comedy-drama series. Commencing with season 7 episode ‘To whom it may concern’, she worked as a producer till the closing stage of that season. TV Guide revealed later on that it was a mere persuasion to get her on eighth season of the series.
She also appeared in the second tournament of ‘Bravo’s Celebrity Poker Showdown.’ After succeeding in her preliminary match, she came in second to another former NewsRadio star, Maura Tiemey, in the championship game.
Her film roles involve many student films of NYU and certain paramount studio releases including ‘Sweet November’, ‘Bad Santa’, ‘The Pacifier’, ‘Because I Said So’, ‘Evan Almighty’, ‘Flash of Genius’ etc. She performed in several short-films, including 15-minute long ‘Gnome’ as well.
She signed a seven-figure development deal with NBC in one of the year’s richest TV talent pacts but the deal ended cordially due to writers strike.
She also did Voice-over in national advertising for Kellogg’s Special K products, and American Express advertisements pioneering the launch of Plum Cards.
Continue Reading Below

She made her Broadway Theatre debut as Miss Adelaide in the restaging of play ‘Guys and Dolls’, which embarked on enacting the preview performances on February 5, 2009, and opened on March 1, 2009. The Production was shut down on June 14, after playing 113 shows and 28 previews.

On October 9, 2009, she replaced Maura Tierney in the television Series ‘Parenthood’ as a single mother Sarah Braverman. The series unveiled on NBC the following year and later underwent improvisations for a second season.
In January 2009, it was revealed that Graham would star in the comedy pilot, ‘The Bridget Show’ for ABC playing a talk show host and self-help guru who can’t let her ex-boyfriend go. Nonetheless, it was not given the series order.
In July 2012, she participated as a judge in the first episode of Season 10 of ‘Project Runway’, an American Reality Television Series.
Lately, she has debuted as a writer with her amusing and delightful novel titled ‘Someday, Someday, Maybe’, which is about a struggling actress in New York City. It is scheduled to release on April 30, 2013. 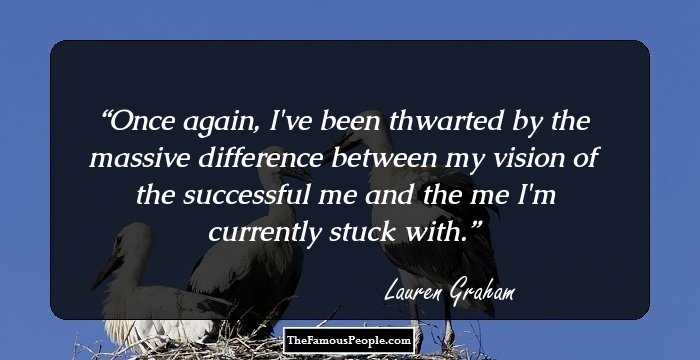 Quotes: Me
Major Works
She played a lead role in critically acclaimed ‘Gilmore Girls’ Series which received an American Film Institute Award. It also won an Emmy award for its only nomination in 2004.
She won high accolades for her performance in an American dramedy ‘Parenthood’ which won PRISM Awards in 2012.
Awards & Achievements
In 2005, she got nominated under several categories and received two Teen Choice Awards under the category ‘Choice TV Parental Units’ for her immaculate performance in Gilmore Girls Series.
Continue Reading Below
In 2010, she won a Teen Choice Award under the same category for ‘Parenthood’ television series. 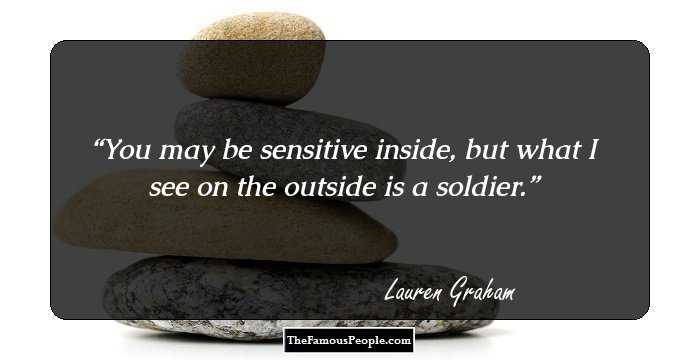 Quotes: You, I
Personal Life
In 2002, Lauren dated Tate Donovan, whom she met in the play ‘Once in a Lifetime’ at the Williamstown Theatre Festival, Massachusetts. She later claimed that their personalities were incompatible.
In 2003, she dated actor Matthew Perry who played Chandler Bing on the famous series ‘Friends’ but they broke-up eventually.
She briefly dated Marc Blucas, an American Actor, in 2005. Apparently, it didn’t work out.

She was romantically linked with her ‘Parenthood’ co-star Peter Krause since 2010. However, the couple parted ways in 2021.

Trivia
Lauren is very fond of Japanese Culture and finds herself connected to it. When she was younger, she had a Japanese Nanny for two years. Her first word as a child was in Japanese.
Her friends can always count on her to cook ‘’good butterscotch brownies.’

Quotes By Lauren Graham | Quote Of The Day | Top 100 Quotes

See the events in life of Lauren Graham in Chronological Order