(33rd President of the United States)

Harry S. Truman was the 33rd president of the United States. He assumed presidency after the sudden demise of President Franklin D. Roosevelt, and was in the office from 1945 to 1953. He oversaw America’s participation in ‘World War II’ and is infamous for approving the use of atomic weapons against Japan. Born in an ordinary family in Missouri, Truman did not complete college education as he dropped out of a business college. After graduating from high school, he took up a number of jobs before volunteering for military duty during ‘World War I.’ Thanks to his valor and bravery, he won respect and admiration and was made the captain. Post ‘World War I,’ Truman forayed into business but was not very successful in his venture. He then entered politics and was elected to the United States Senate in 1934, and was re-elected in 1940. President Roosevelt chose Truman as his running mate for the 1944 presidential election and they won the elections. Truman served as the vice president for just eighty-two days as the untimely demise of President Roosevelt thrust him to the chair of presidency. Truman’s reelection in the 1948 presidential elections is considered to be one of the greatest election upsets in American history; he defied all predictions and public opinion polls to emerge victorious. After the completion of his second term, he returned to Independence, Missouri where he spent the rest of his life. American Celebrities
Political Leaders
American Men
Male Leaders
Taurus Leaders
Childhood & Early Life
Harry S. Truman was born on May 8, 1884, in Lamar, Missouri, USA, to John Anderson Truman and Martha Ellen Young Truman. His father was a farmer and livestock dealer.
Harry was named after his maternal uncle Harrison Young, and his middle name ‘S’ was given to him to honor his maternal grandfather Solomon Young and his paternal grandfather Anderson Shipp Truman.
His childhood was spent in a family farm in Independence, Missouri, and he started attending school from the age of eight. He graduated from ‘Independence High School’ in 1901.
After graduating from high school, Truman enrolled at ‘Spalding's Commercial College,’ but left after a year. He then took up a number of odd jobs, including job as a timekeeper for a railroad construction company and a series of clerical jobs.
He wanted to join the ‘United States Military Academy’ but was rejected because of poor eyesight. He then served in the ‘Missouri Army National Guard’ from 1905 to 1911. 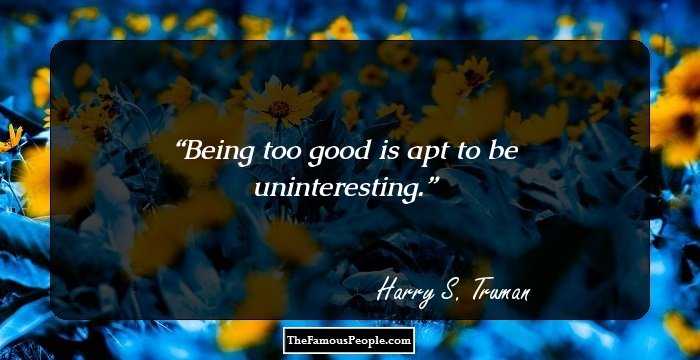 Continue Reading Below
Career
When the United States entered ‘World War I’ in 1917, Truman volunteered and rejoined the ‘Missouri Army National Guard.’ He was promoted to the rank of captain and his unit was deployed in France. During the Meuse-Argonne campaign, he led his unit and fought with great bravery and valor.
Post ‘World War I,’ he returned to Missouri and opened a haberdashery in Kansas City after collaborating with his friend Jacobson. During the recession of 1921, his business suffered losses and his shop went bankrupt. At that time, Truman owed $20,000 to creditors. He did not accept bankruptcy and repaid his debts over a period of 15 years.
In 1922, with the help of political boss Thomas Pendergast, Truman got elected as the County Court judge of Jackson County's eastern district. However, in 1924, he lost the election to a Republican candidate.
In 1926, with the support of Pendergast, he got elected as the presiding judge of the county court and was re-elected in 1930.
In 1934, Truman was elected to the United States Senate from Missouri. He served on the ‘Senate Appropriations Committee’ and the ‘Interstate Commerce Committee.’ During his term, he initiated a legislation that imposed tighter federal regulation on the railroads; this established his image as a man of integrity in people's eyes.
He was re-elected to Senate in 1940. In his second term, he headed the ‘Truman Committee,’ which was formed to investigate the ‘National Defense Program’ to prevent war profiteering and wasteful spending in defense industries. The committee helped save an estimated $10–15 billion in military spending, and thousands of lives of US servicemen.
Truman earned widespread fame and recognition for his work as the head of the committee and this tipped the scale in his favor when Roosevelt was looking for a running mate for the 1944 presidential election.
Truman accepted the offer and campaigned vigorously. Roosevelt and Truman won the elections and Truman assumed office as the vice president of the United States on January 20, 1945.
He served as vice president for just 82 days before President Roosevelt died of a massive stroke. Truman became the president of the United States on April 12, 1945.
Continue Reading Below
Soon after assuming presidency, Truman was thrust with the responsibility of ending the ‘World War II.’ He took the controversial decision of approving the use of atomic weapons against Japan in order to force Japan’s surrender. The decision led to the loss of several lives and received widespread criticism.
He also announced the surrender of Germany and played a leading role in founding the ‘United Nations.’
In order to help rebuild European economies after the end of ‘World War II,’ he implemented the ‘Marshall Plan.’
His presidency was marked by the deterioration of relations between the United States and the Soviet Union, which led to the ‘Cold War,’ and the division of major countries of the world into two camps.
In 1948, Truman was re-elected as the president when he defeated Republican candidate Thomas Dewey. This victory is considered as one of the biggest election upsets in the American political history. Opinion polls predicted Truman’s defeat but he surprised everyone with his victory over Dewey.
During his second term, he faced the challenge of the ‘Korean War.’ He intervened immediately by sending the US troops there. After registering initial success, he received a setback when China sent its troops to help North Korea. This led to a change of tactics and disagreement between Truman and the US General Douglas MacArthur. The disagreement led to MacArthur’s sacking. Since MacArthur was a popular general, his sacking resulted in a sharp decline in Truman’s popularity ratings.
After the completion of his second term, Truman retired from politics and returned to Independence, Missouri where he spent the rest of his life. 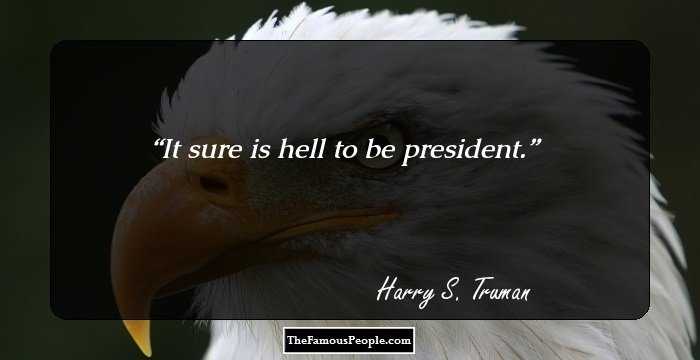 Major Works
Truman approved the utilization of atomic weapons against Japan, which hastened the termination of ‘World War II.’
He played a leading role in the founding of the ‘United Nations’ and signed the charter, ratifying the ‘United Nations.’
He implemented the ‘Marshall Plan’ to assist the rebuilding of European economies after ‘World War II.’
On domestic front, Truman successfully shepherded the American economy through post-war economic challenges, and initiated racial integration in the military and federal agencies.
Personal Life & Legacy

Truman married his childhood sweetheart, Elizabeth “Bess” Wallace, in 1919, and the couple had a daughter, named, Margaret Truman Daniel. 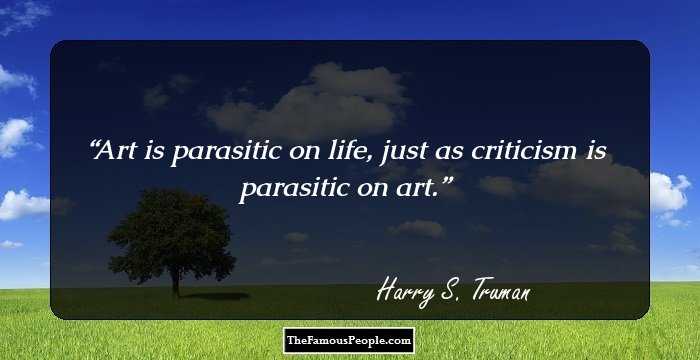 See the events in life of Harry S. Truman in Chronological Order