George Santayana was a noted Spanish American philosopher, essayist, poet, and novelist. Born in Spain, he was brought to Boston, USA at the age of eight to live with his mother and half-siblings. Uprooted from the simple life he led with his father in the medieval town of Avila, an incident he later characterized as ‘moral disinheritance’, he quickly learned English and entered Boston Latin School and then Harvard University. Soon after receiving his doctoral degree in philosophy from Harvard at the age of 25, he began his career at his alma mater as a faculty member, quickly establishing himself as a popular teacher and philosopher. Soon disillusioned with some aspects of academic life, he started preparing for early retirement at the age of 30, ultimately leaving his job and moving to Europe at the age of 48. Thereafter, he concentrated only on writing, publishing as much as nineteen books in the last forty years of his life. He spent his last years in Rome and died of cancer just a few days before his 89th birthday. Saint Teresa of...
DID WE MISS SOMEONE?
CLICK HERE AND TELL US
WE'LL MAKE SURE
THEY'RE HERE A.S.A.P
Quick Facts

Spanish Celebrities
Essayists
Philosophers
Spanish Men
Harvard College
Childhood & Early Years
George Santayana was born as Jorge Agustín Nicolás Ruiz de Santayana y Borrás on December 16, 1863, in Madrid, Spain. His father, Agustín Ruiz de Santayana, was trained in law; but not having an aptitude for legal profession, he joined colonial service, trying his hand at portrait painting and writing.
George’s mother, Josefina nee Borrás Sturgis, was the daughter of a Spanish diplomat in Philippines. She was first married to Russell Sturgis, noted Bostonian merchant, having five children with him, out of which three survived infancy. After his death, she moved to Madrid, where she married Agustín Santayana.
George was his parents’ only child. By the time he was born, his father was fifty-one and his mother thirty-seven. His half siblings, Susana Sturgis, Josephina Sturgis and Robert Shaw Sturgis, were also much older to him. Susana, at that time 12 years old, acted as his godmother.
As there was nothing common between them, his parents were not happy in their marriage. Moreover, compared to the Sturgis, Agustin was neither wealthy nor sophisticated, a fact Josefina could never forget.
The situation became worse, when Agustin moved the family to Avila sometime before 1866. Not having any Spanish roots, it became harder for Josefina to adjust in the small medieval town.
Josefina had earlier promised her late husband, Russell Sturgis, that she would raise his children in Boston. In 1869, with the financial aid from her brother-in-law, Robert Sturgis, she left for Boston, taking with her the three Sturgis children. There she received inheritance from her father-in-law and settled down comfortably.
George Santayana, left behind in Avila, was quite happy with his father, leading a simple life and eating simple Spanish food, for which he would retain a lifelong fondness. In time, he was enrolled at local Don Casimeros School. But soon, Agustin realized that George would have better chances in Boston.
In June 1872, father and son left for the USA. But unable to pick up English or adjust in the new surrounding or to the lifestyle of his now-rich wife, Agustin left Boston on May 29, 1873, leaving ten year old George with his mother and half siblings.
The uprooting from his native soil into an unfamiliar surrounding and estrangement from his father had a deep emotional impact on young George. Much later in his autobiography, he characterized the move as ‘moral disinheritance’.
In Boston, he was admitted to Miss Welchman’s Kindergarten with the sole purpose of learning English. Coached by Susana and learning the language by ear, he soon became fluent in English. Thereafter, he was admitted to Boston Latin School. All along, he kept in touch with his father through letters.
It was at the Boston Latin School that he learned to appreciate the cultural contributions of classical and medieval worlds. One day, it would provide historical perspective to his philosophical works.
In 1878, on graduating from Boston Latin School, George Santayana entered Harvard University. From now on, he regularly began to visit his father. At Harvard, he led an active social life, becoming member of eleven organizations, including ‘Harvard Monthly’ (founder member), ‘Philosophical Club’ (President), ‘The Lampoon’ and ‘Hasty Pudding’.
In 1882, Santayana graduated summa cum laud from Harvard. Thereafter, he spent eighteen months studying philosophy at the University of Berlin on a Walker Fellowship, after which he returned to Harvard to complete his doctoral thesis on Hermann Lotze under the pragmatist William James, earning his PhD in 1889. 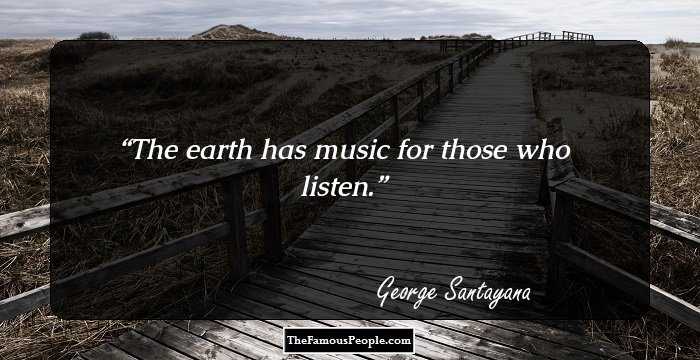 Quotes: Music
Continue Reading Below
As Harvard Professor
In the fall of 1889, George Santayana began his career as a faculty member in the Department of Philosophy at Harvard University. Very soon, he became popular both as a teacher and a philosopher, being considered at par with his doctoral guide William James and idealist Josiah Royce.
Among his students were T. S. Eliot, Robert Frost, Gertrude Stein, Horace Kallen, Walter Lippmann, and W. E. B. Du Bois. However, in spite of his success as an academic, his attachment to Europe remained as strong as before. Every summer he visited his father in Italy.
Santayana had entered academic life because he thought it would provide enough free time to pursue his intellectual ambitions. But before long, he found the corporate environment of the universities ill suited for intellectual development. The faculty meetings and university committees also appeared to him as infringement on his time.
By 1893, disillusioned with academic life, he started planning for an early retirement. By the following year, he had his first book, ‘Sonnets and Other Verses’ published. Other than sonnets and odes, it also contained number of miscellaneous poetries. The book has been digitalized by Google in December 2007.
In 1896, he spent his sabbatical leave in England, studying for one year at King’s College, University of Cambridge. In the same year, the lectures on aesthetics he gave at the Harvard University from 1892 to 1895 were published as ‘The Sense of Beauty: Being the Outline of Aesthetic Theory’.
Continuing to teach and write, he published ‘Lucifer: A Theological Tragedy’ in 1899; ‘Interpretations of Poetry and Religion’ in 1900 and ‘A Hermit of Carmel And Other Poems’ in 1901. While the first book was a blank verse drama, the second was his first book of critical prose.
His next major work, ’The Life and Reason’, was published from 1905 to 1906 in five parts, i.e. ‘Reason in Common Sense’, ‘Reason in Society’, ‘Reason in Religion’, ‘Reason in Art’, and ‘Reason in Science’. According to most critics, the work provides the most complete expression of his moral philosophy.
In 1907, George Santayana was appointed a full professor at Harvard University. Three years later, in 1910, he had his seventh work, ‘Three Philosophical Poets: Lucretius, Dante, and Goethe’ published. It was his last book published from his Harvard period. 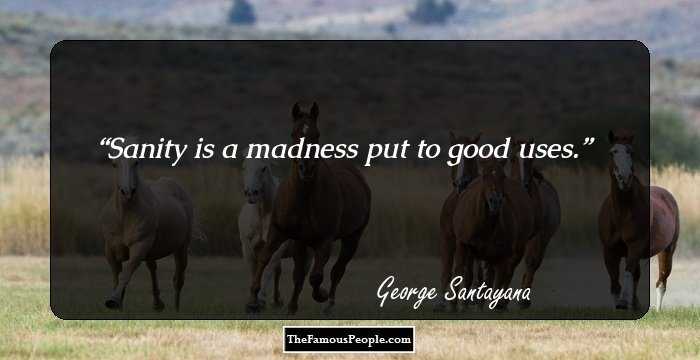 Continue Reading Below
In Europe
In May 1911, George Santayana announced his retirement from Harvard. It took his colleagues by surprise. By then, he was highly recognized as an established philosopher, successful poet, critic and teacher. Very popular with students, his books were also selling well and the publishers were asking for more.
While Harvard tried to retain him with lucrative offers, he left for Europe in January 1912. While there, he received news that his mother had died, leaving him an inheritance of $10,000. By then, both his half-sisters were in Italy and therefore he had no obligation to return.
In 1912, he sent his resignation letter to Harvard. At last free, he started moving around, visiting his childhood town Avila, finally choosing Paris as his residence. Meanwhile in 1913, he had his eighth work, ‘Winds of Doctrine: Studies in Contemporary Opinion’ published
In 1914, while he was in England, the World War I broke out. Unable to return to the mainland, he settled down at Oxford. In the following year, he had ‘Egotism in German Philosophy’, published.
After the war, he returned to the continent, moving around, publishing works like ‘Character and Opinion in the United States: With Reminiscences of William James and Josiah Royce and Academic Life in America’ and ‘Little Essays, Drawn From the Writings of George Santayana’ in 1920
Until late 1920s, he mostly lived in Paris, Madrid, Ávila, the Riviera, and Florence. Traveling around, he published ‘Soliloquies in England and Later Soliloquies’ (1922), ‘Scepticism and Animal Faith’ (1923), ‘Dialogues in Limbo’ (1926), ‘Platonism and the Spiritual Life’ (1927), as well as the first book of ‘The Realms of Being’ (1927).
During this period, universities in the USA also tried to lure him back to the country with several lucrative offers. In 1929, he was offered the Norton Chair in Poetry, later William James Lecturer in Philosophy, both at Harvard. In 1931, he also received an invitation from Brown University.
In Rome
Initially, while he was traveling around, George Santayana used to spend the winters in Rome. Sometime towards the end of 1920s, he permanently settled down in the city. Continuing to write, he published the three remaining parts of his magnum opus, ‘The Realms of Being’ in 1930, 1938 and 1940 respectively.
In-between working on his magnum opus, he also published ‘The Genteel Tradition at Bay’ (1931) and ‘Some Turns of Thought in Modern Philosophy’ (1933). In 1935, he published a novel, ‘The Last Puritan’. An unexpected best seller, it made him financially comfortable enough to help other writers, including Bertrand Russell.
Continue Reading Below
Continuing to write, he published his autobiography ‘Persons and Places’ in 1944. His last published works include ‘The Middle Span’ (1945), The Idea of Christ in the Gospels’ (1946), ‘Dominations and Powers’ (1951), and ‘My Host the World’ (posthumous in 1953). 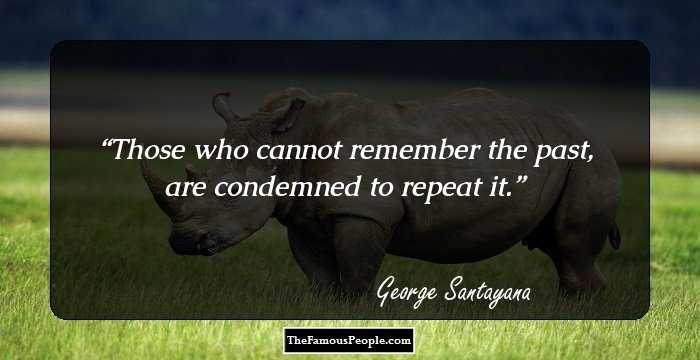 Quotes: Past
Major Works
’The Life and Reason’, written in 1905-1906, is one of Santayana’s first major works. Consisting of five parts, the book is one of the most poetic and well-written works in Western philosophy and gives us an insight into the author’s idea about moral philosophy.
’Scepticism and Animal Faith’, written in 1923, is considered to be his next major work. Santayana wrote it as an introduction to a new system of philosophy, which he expressed more elaborately in his magnum opus ‘The Realm of Being’
’The Realms of Being’ is his last major work. Dealing mainly with the field of ontology, he defined realm of being in four volumes, entitled ‘The Realm of Essence’, ‘The Realm of Matter’, ‘The Realm of Truth’, and ‘The Realm of Spirit’.
Awards & Achievements
In 1925, George Santayana was awarded Benson Medal by the Royal Society of Literature, London.
In 1945, he received Butler Gold Medal from the Columbia University, USA.
In 1911, he received honorary degree from the University of Wisconsin, USA.
Personal Life & Legacy
George Santayana never married. If he had any romantic life, it had remained well-concealed. However, a few of his remarks in late years and his friendship with men, who were openly homosexual, have led many to believe that he might have been homosexual himself; if not, at least bisexual.
Santayana was in Rome when the Second World War broke out. A Spanish citizen, his funds came mainly from England and USA. He therefore, tried to cross into Switzerland, but was stopped due to lack of proper documents, forcing him to return to Rome.
On 14 October 1941, Santayana entered the Clinica della Piccola Compagna di Maria, a hospital-clinic run by a Catholic nuns. Here he lived until his death eleven years later.
Suffering from cancer, George Santayana died on September 26, 1952. A naturalist, he had wished to be buried in unconsecrated ground. Unfortunately, Rome had only one such burial ground, reserved for the criminals and the Spanish Consulate at Rome refused to bury him there.
He was finally buried in a plot reserved for Spanish Citizens in the Campo Verano cemetery, with the Spanish consulate providing Panteon de la Obra Pia Espanola as a suitable memorial for him.
Recommended Lists:
Writers #871
Intellectuals & Academics #328

Quotes By George Santayana | Quote Of The Day | Top 100 Quotes

See the events in life of George Santayana in Chronological Order