St. Teresa of Avila, also called Saint Teresa of Jesus, was a prominent 16th century Spanish Roman Catholic saint. She was a reformer of the Carmelite Order and a major figure of the Counter-Reformation, a period of Catholic revival initiated in response to the Protestant Reformation during the mid-16th century. She was also a mystic and an author and is considered to be the patron saint of Headache sufferers and Spanish Catholic Writers. Born into a religious household, she was raised by strict and devout Christian parents. From a young age she was fascinated by the lives of saints and ran away from home at the age of seven to seek martyrdom among the Moors. She was eventually brought back home but nonetheless continued on her quest for spiritual knowledge. The untimely death of her mother when Teresa was just a teenager intensified her devotion towards God and religion as she instinctively turned to the Virgin Mary for comfort. She later entered a Carmelite Monastery of the Incarnation in Ávila and became a nun. She laid the foundation for the Catholic mendicant order, the Discalced Carmelites, or Barefoot Carmelites, along with another Spanish saint, Saint John of the Cross. She was canonized years after her death and more recently, named a Doctor of the Church. Saint Lawrence
28th March In History
DID WE MISS SOMEONE?
CLICK HERE AND TELL US
WE'LL MAKE SURE
THEY'RE HERE A.S.A.P
Quick Facts

Spanish People
Spiritual & Religious Leaders
Spanish Women
Female Theologians
Women Philosophers
Childhood & Early Life
St. Teresa of Avila was born as Teresa de Cepeda y Ahumada on 28 March 1515, in Gotarrendura, Ávila, Crown of Castile (present day Spain). Her father, Alonso Sánchez de Cepeda, was a very strict man while her mother, Beatriz de Ahumada y Cuevas, was a religious and kind woman.
From an early age she displayed a keen interest in religion and loved to learn about the lives of saints. She prayed for long hours in silence and distributed alms to the poor and the needy. Even as a child she was very pious and kind hearted.
She was very close to her mother. Tragedy struck when her mother died when Teresa was only 14. Grief stricken, the girl sought solace in religion and was instinctively drawn towards the Virgin Mary.
She experienced some changes in her personality while she was in her late teens. Even though she was still religious, she also developed interests in reading popular fiction and in caring for her appearance. She was naturally charming and loved to socialize with her many friends.
Her father sent her to the Augustinian nuns at Ávila for her education when she was 16. This rekindled her love for religion and she decided to become a nun of the Carmelite Order and lead a spiritual life. 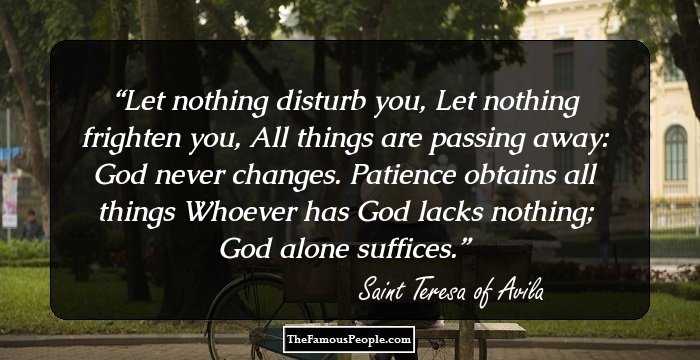 Quotes: God, Never, Alone
Continue Reading Below
Later Years
Even though she had joined the convent to embark on a spiritual life, the environment at the convent was not at all conducive to such pursuits. There was no harmony among the nuns, and the place was crowded with too many visitors. Thus Teresa was unable to concentrate on her prayers and was disappointed that the convent did not help at all in her spiritual progress.
In early 1560 she became acquainted with the Franciscan priest Saint Peter of Alcantara, who became her spiritual guide and counselor. Encouraged by him, she now resolved to found a reformed Carmelite convent.
She was helped in her objective by Guimara de Ulloa, a wealthy friend who supplied the funds. Teresa also spent years convincing Spanish Jewish converts to follow Christianity.
In 1562 she established a new monastery, named St. Joseph's (San José). Though initially the monastery was plagued by financial issues and poverty, she worked hard over the next few years to establish new houses of her order.
She established several reform convents at Medina del Campo, Malagón, Valladolid, Toledo, Pastrana, Salamanca, and Alba de Tormes between 1567 and 1571. She was also given the permission to set up two houses for men who wished to adopt the reforms.
St. Teresa of Avila spent a great deal of time in solitude contemplating in the name of God. As an author, she is considered one of the foremost writers on mental prayer, a form of prayer whereby one loves God through dialogue and meditating on God's words.
Major Works
In 1580 she wrote the ‘Castillo interior/ Las moradas’ (Interior castle/ The mansions) which went on to become her best known literary work. She described the various stages of spiritual evolution leading to full prayer.
Another one of her famous works is ‘The Way of Perfection’ in which she describes a method for making progress in the contemplative life. She called this a "living book" as she had detailed the way of progressing through prayer and Christian medication, and also explained the purpose and approaches to spiritual life.
Personal Life & Legacy
St. Teresa of Avila remained active throughout her life. Even when she was well into her sixties she continued founding convents to promote Roman Catholicism. In fact, the convents in northern Andalusia, Palencia, Soria, and Burgos were founded by her towards the end of her life.
During one of her journeys from Burgos to Alba de Tormes, she became very ill and died on October 4, 1582.
Teresa of Avila was canonized by Pope Gregory XV in 1622, forty years after her death.
In December 1970, Pope Paul VI conferred upon her the papal honor of Doctor of the Church, making her one of the first women to be awarded the distinction.
Recommended Lists:
Intellectuals & Academics #853