Often remembered as the ‘Father of Observational Astronomy,’ Galileo Galilei was one of the most celebrated and illustrious astronomers, mathematicians, and physicists in the history of mankind. He played a major role and was instrumental in establishing the scientific revolution. Galileo is credited for developing much of the modern concepts, which have proved to be the foundation for the present-day research on various fields. Throughout his life, Galileo greatly contributed to astronomical observatory. He bettered the telescope, which assisted him in his discoveries. He also dismissed the Aristotelian view, which was dominant in that era, and supported Copernicanism. His contribution in the field of astronomy includes the telescopic confirmation of the phases of Venus, the discovery of the four largest satellites of Jupiter, and the observation and analysis of sunspots. Furthermore, he invented an improved military compass and other instruments in the field of applied science and technology. He championed the heliocentric view and supported Copernicanism which irked the Roman Catholic Church. Nevertheless, with the dawn of the 20th century, the Church lifted the ban imposed on Galileo’s books and acclaimed him as the ‘Father of Modern Sciences.’ Amedeo Avogadro
DID WE MISS SOMEONE?
CLICK HERE AND TELL US
WE'LL MAKE SURE
THEY'RE HERE A.S.A.P
Quick Facts

Italian People
Astronomers
Mathematicians
Italian Men
Male Scientists
Childhood & Early Life
Galileo Galilei was born Galileo di Vincenzo Bonaulti de Galilei on 15 February 1564, in Pisa, Duchy of Florence, to Vincenzo Galilei and Giulia Ammannati. His father was a lutenist, composer, and music theorist by profession. At an early age, Galileo learned the technicalities involved in lute and became an accomplished lutenist.
He aspired to take up priesthood when he grew up. However, his father wanted Galileo to be in the field of medicine as it promised a secured financial future. Complying with the wishes of his father, Galileo took to studying at the ‘University of Pisa’ for a medical degree.
There were two incidents which led Galileo to move from being a physician to a mathematician. The first was in 1581 when Galileo noticed that a chandelier took almost the same time to swing back and forth regardless of its swing varying from smaller to larger arcs. Amused by it, he set up two pendulums of equal length and swung them with a variation in sweep. Interestingly, both the pendulums, irrespective of their sweeps, took the same amount of time to return to the starting position and synchronized with each other.
The second incident was a lecture of geometry which he attended accidentally. Both the incidents made Galileo realize his true calling and he finally convinced his father to allow him to study mathematics and natural philosophy.
Galileo was exposed to the Aristotelian view of the world during his years in Pisa. Though not entirely correct, it was the then leading scientific theory, and the only one to be sanctioned by the Roman Catholic Church.
Though Galileo, like any other intellectual of that age, supported the Aristotelian view initially, he eventually drifted away from the same. Financial difficulties cut short Galileo’s education at the university, which he left in 1585, before earning his degree. 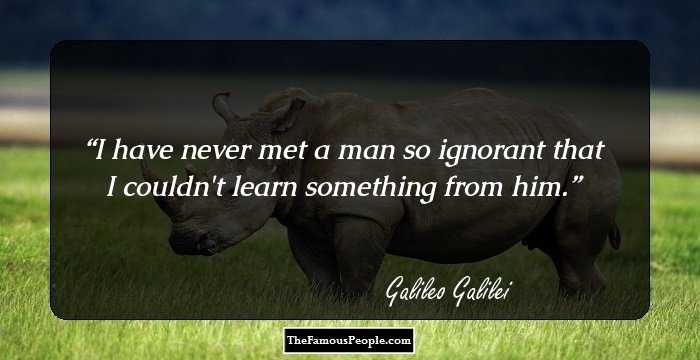 Quotes: Never, I
Continue Reading Below
Academic Career
Upon leaving the university, Galileo set his mind to create a thermoscope, which was a precursor to the presently used thermometer. He then published a small book titled ‘The Little Balance’ which highlighted his work on hydrostatic balance. It was this work that brought Galileo recognition and name in the scholarly world.
To support himself, Galileo took up the job as an instructor at ‘Accademia delle Arti del Disegno’ in Florence; his profile included teaching perspective and chiaroscuro. Simultaneously, he studied disegno and became quite interested in the artistic traditions of the city. Galileo also developed a profound interest in the works of the Renaissance artists.
No sooner than in 1589, Galileo was promoted to the chair of mathematics at the ‘University of Pisa.’ During his term at Pisa, Galileo conducted his famous experiment of dropping items of varied weight from the top of the Leaning Tower.
It was through the findings of the experiments that Galileo rejected Aristotle’s claim that speed of the falling object is directly proportional to its weight. He mentioned the outcome of the experiment in his paper titled ‘De Motu’ (On Motion). Instead of taking Aristotle’s view of motion, Galileo took Archimedean approach to the problem.
Due to his rejection of Aristotelian view, Galileo gained an unpopular status within the society. In 1592, his contract was not renewed at the ‘University of Pisa,’ due to which he lost his position. However, Galileo’s patrons helped him secure the chair of mathematics at the ‘University of Padua,’ which he served for 18 years.
At the ‘University of Padua,’ Galileo taught young students geometry, mechanics, and astronomy. The appointment came at a perfect time as Galileo had to support his family due to the death of his father.
Since the salary earned at the university was not enough to cover all the expenses of the family and for the treatment of his younger brother Michelagnolo, Galileo started imparting private lessons to well-to-do boarding students. 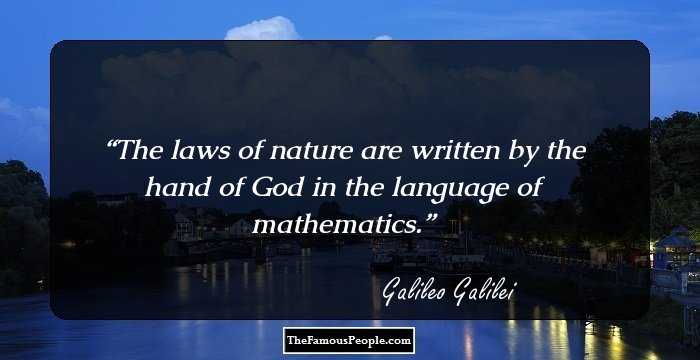 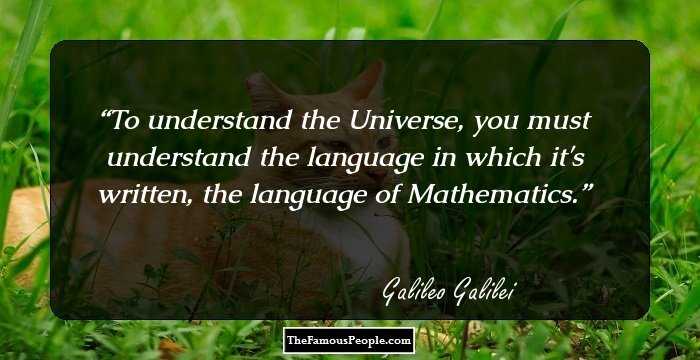 Quotes: You
Trivia
He is known as the ‘Father of Modern Science’ for playing a major role in the scientific revolution.
His heliocentric view of the solar system contradicted with the views of the Roman Catholic Church which believed that the earth was stationary.
This great scientist, with the help of his telescope, discovered that the Moon had uneven and rocky surface, dismissing the general Aristotelian belief that it was a perfect sphere.
Recommended Lists:
Scientists #6

Quotes By Galileo Galilei | Quote Of The Day | Top 100 Quotes

See the events in life of Galileo Galilei in Chronological Order