Archimedes of Syracuse was an outstanding ancient Greek mathematician, inventor, physicist, engineer and also an astronomer. Although not much is known about his life, he is considered as one of the most eminent scientists and mathematicians of the classical era. He established strong foundations in the field of mathematics, physics, particularly in statics, hydrostatics and also explained the principle of the lever. In his lifetime, he made many incredible inventions such as designing innovative machines, including screw pumps, compound pulleys and siege machines. He is said to have anticipated modern calculus and analysis and derived a range of geometrical theorems, including the area of a circle, the surface area and volume of a sphere, and the area under a parabola. He applied the ‘method of exhaustion’ in calculating the area under the arc of a parabola with the summation of an endless series and gave a precise approximation of pi. He also identified the spiral that bears his name, designed formulae for the volumes of surfaces of revolution and also invented a technique for expressing extremely large numbers. While the inventions of Archimedes were known in the antiquity but his mathematical writings were little known. The first comprehensive compilation of his mathematical writings was not made until c. 530 AD by Isidore of Miletus. The commentaries on the works of Archimedes written by Eutocius in the sixth century AD opened them to a wider audience for the first time. Only a few copies of Archimedes' written work survived through the middle ages and became an influential source of ideas for scientists during the Renaissance. In addition to that, the discovery in 1906 of unknown works by Archimedes in the Archimedes Palimpsest has thrown new light into how he obtained mathematical results. Giordano Bruno
DID WE MISS SOMEONE?
CLICK HERE AND TELL US
WE'LL MAKE SURE
THEY'RE HERE A.S.A.P
Quick Facts

Also Known As: Archimedes of Syracuse

Italian People
Physicists
Astronomers
Mathematicians
Italian Male
Childhood & Early Life
He was born around 287 B.C in Syracuse on the island of Sicily, Greece. His father’s name was Phidias who was an astronomer. Going by Plutarch, he might have been related to King of Syracuse, Hieron and his son Gelon.
Heracleides (Archimedes’ friend) had written a biography on him but unfortunately this work had been lost and there is not much information available about his life.
Sources reveal that he started his studies in the school that was established by the Greek mathematician Euclid in Alexandria, Egypt. After pursuing his studies, he went back to Syracuse to live in his native city. 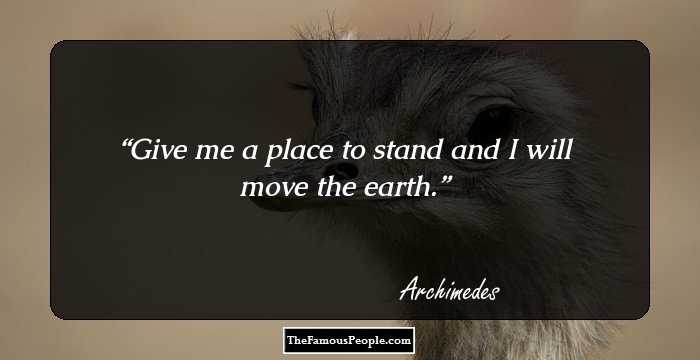 Quotes: Me, Will, I
Continue Reading Below
Archimedes' Principle
This was one of the most important discoveries by him. This was a method discovered by him that helps in determining the volume of an object with an irregular shape.
King Hiero II had supplied pure gold to get a crown made for himself but when he received it he suspected that some silver had been used so he called Archimedes to investigate. While taking bath, Archimedes noticed that the amount of water overflowing the tub was proportional to the portion of his body that was being immersed. It stuck to him that the same would apply to the crown and he could use the proportion of both gold and silver to weigh them in water. 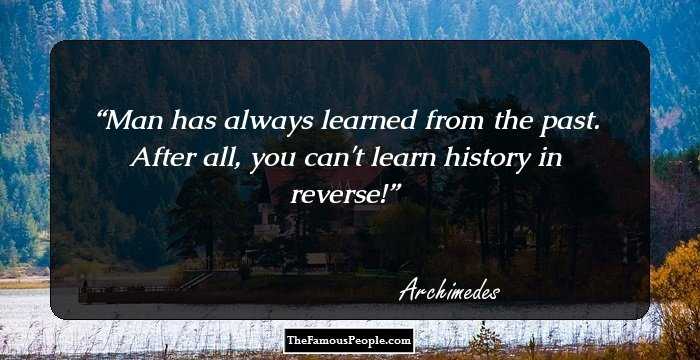 Quotes: Past
Archimedes' Screw
It is interesting to note that a number of discoveries made by him were a result of the requirements of his home city – Syracuse.
Going by the Greek writer Athenaeus of Naucratis, King Hiero II gave Archimedes the task of designing a ship, “Syracusia” that could carry large number of people, supplies and could be used as a naval warship. Syracusia was large enough to be able to carry 600 people. It had a gymnasium, a temple that was dedicated to the Goddess Aphrodite and also possessed a garden.
A ship of this gigantic proportion would leak a huge amount of water through the hull, so Archimedes invented a screw to remove the bilge water (the bilge is the lowest compartment on the ship and the water that collects in this area is called bilge water). The Archimedes’ screw was a device with a revolving screw-shaped blade inside a cylinder.
The Archimedes’ screw still holds importance and is used to propel liquids as well as solids like grain and coal.
Claw of Archimedes
Also known as the “Ship Shaker”, it was designed by him to defend his city. It comprised of a crane-like arm from which a large metal-grasping hook was hung. When the claw was plunged onto an attacking ship, the arm would swing upwards, lifting the ship out of the water and perhaps even sinking it.
In order to test the feasibility of the device, modern experiments have been conducted. In 2005, a documentary titled ‘Super weapons of the Ancient World’ featured a version of the claw and declared that it was workable device.
Continue Reading Below 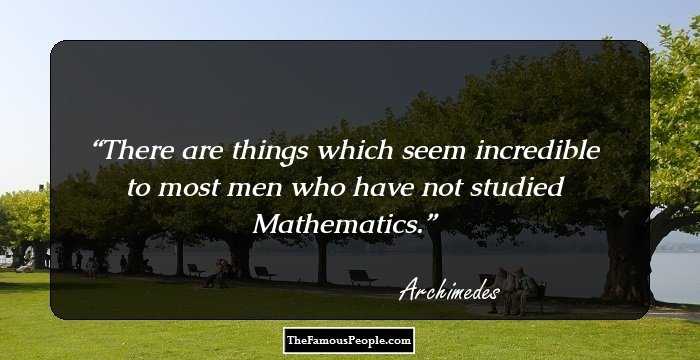 Quotes By Archimedes | Quote Of The Day | Top 100 Quotes

See the events in life of Archimedes in Chronological Order