Ernest Rutherford was a New Zealand physicist popularly known as the father of nuclear physics. He received the Nobel Prize in Chemistry in 1908 “for his investigations into the disintegration of the elements, and the chemistry of radioactive substances.” He established the fact that radioactivity involved the nuclear transformation of one chemical element to another. He also identified and named the Alpha and Beta radiations. He named the Gamma rays as well. The Rutherford model of the atom was introduced when he theorized that atoms have their charge concentrated in a very small nucleus. He conducted experiments that resulted in the first ‘splitting’ of the atom in 1917; during the process he discovered and named the proton. Under his supervision as the Director of the Cavendish Laboratory at the University of Cambridge, his associate James Chadwick proved his theorization of neutrons and soon after, the first experiment to split the nucleus in a fully controlled manner was conducted by his students, John Cockcroft and Ernest Walton. He was admitted to the Order of Merit in 1925, and was raised to the peerage as Lord Rutherford of Nelson in 1931. The chemical element 104 - Rutherfordium has been named after him. Walter Houser B...
DID WE MISS SOMEONE?
CLICK HERE AND TELL US
WE'LL MAKE SURE
THEY'RE HERE A.S.A.P
Quick Facts

British Celebrities
New Zealander Celebrities
Physicists
British Men
New Zealand Men
University Of Cambridge
Childhood & Early Life
Ernest Rutherford was born on 30 August 1871 at Spring Grove, New Zealand to James Rutherford, a Scottish emigrant farmer and Martha Thompson, an English emigrant schoolteacher. He was the fourth of a dozen children, and the second son.
He initially studied at Havelock School and at the age of 16, entered Nelson Collegiate School. Later in 1889, he won a University scholarship and joined Canterbury College, University of New Zealand, Wellington. He was a bright student and took interest in debates and rugby.
In 1893, he received a double first M.A. degree in Mathematics and Physical Science. Thereafter, he carried on his research work at the college for a brief period of time before receiving his B.Sc. degree in 1894.
In 1894, he also received an ‘1851 Research Fellowship’ from the ‘Royal Commission for the Exhibition of 1851’ that helped him to pursue post-graduate studies as a research scholar under J.J. Thomson at the Cavendish Laboratory, University of Cambridge. 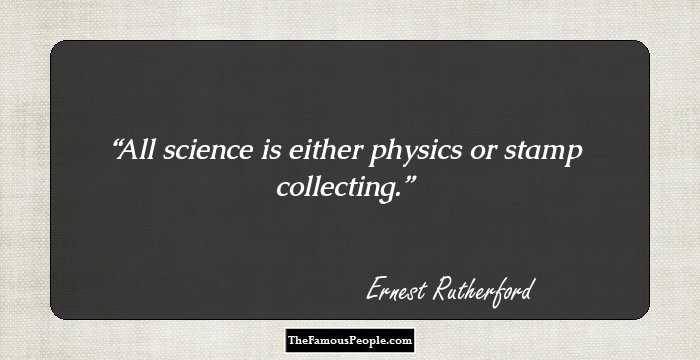 Continue Reading Below
Career
Under the supervision of J. J. Thomson at Cambridge, Ernest Rutherford invented a detector for electromagnetic waves. He managed to detect radio waves at half a mile; a ground-breaking achievement at that point of time. In 1897, he received his B.A. Research Degree and the Coutts-Trotter Studentship of Trinity College.
In 1898, he stated the presence of alpha and beta rays in uranium radiation and specified some of their characteristics. The same year, on Thomson’s reference, he was accepted for the position of Macdonald Professor of Physics at McGill University in Montreal, Canada. Two years later in 1900, he received a D.Sc degree from the University of New Zealand.
In 1907, he returned to England to become the Langworthy Professor of Physics at the University of Manchester. During World War I, he worked on a classified project of submarine detection by sonar.
In 1909, in collaboration with Hans Geiger and Ernest Marsden, Ernest Rutherford conducted the Geiger–Marsden experiment, which established the nuclear nature of atoms by deflecting alpha particles passing through a thin gold foil.
In 1919, he succeeded Sir Joseph Thomson as the Cavendish Professor of Physics at Cambridge. He also eventually became Chairman of the Advisory Council, H.M. Government, Department of Scientific and Industrial Research; Professor of Natural Philosophy, Royal Institution, London; and Director of the Royal Society Mond Laboratory, Cambridge.
In 1919, he also became the first person to transform one element into another. In the experiment, he used alpha radiation to convert nitrogen into oxygen. In the products of the reaction, he observed and brought forth a new particle called proton in 1920.
He also named the particle neutron during the Bakerian Lecture of 1920 and the following year, he theorized its existence in association with Niels Bohr. Years later in 1932, the theory was proved right by his associate James Chadwick, who received the Nobel Prize in Physics (1935) for this breakthrough.
Apart from Chadwick, he also guided other scientists like Blackett, Cockcroft and Walton to their Nobel Prize win; Nobel laureates like G.P. Thomson, Appleton, Powell, and Aston researched with him for some time.
In 1925, he urged the Government of New Zealand to support education and research; this resulted in the formation of the Department of Scientific and Industrial Research (DSIR) in 1926.
Continue Reading Below
Between 1925 and 1930, he was the President of the Royal Society, and later President of the Academic Assistance Council which assisted nearly 1,000 university refugees from Germany. 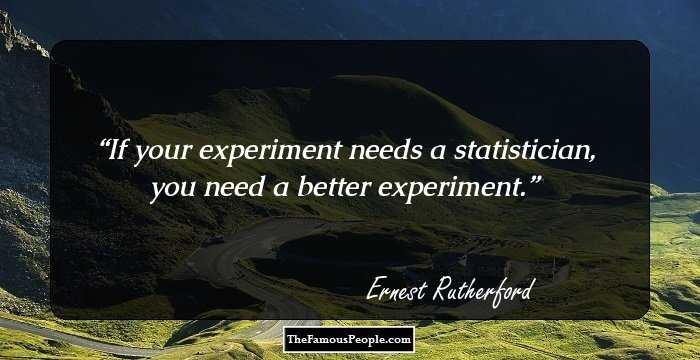 Quotes: You, Need
Major Works
Ernest Rutherford is known as the father of nuclear physics. His own researches and work done by his associates and students under his supervision, established the nuclear structure of the atom and the characteristics of radioactive decay as a nuclear process.
While at Cambridge, he worked with J. J. Thomson on the conductive effects of X-rays on gases. This led to the discovery of the electron which Thomson presented to the world in 1897.
While exploring uranium’s radioactivity, he discovered two distinct types of radiations that differed from X-rays in their penetrating power. He named themAlpha ray and Beta ray in 1899.
In 1903, he considered a type of radiation discovered previously by a French chemist, Paul Villard. It had a much greater penetration power and he named it the Gamma ray. All three names of the radiations – Alpha, Beta, and Gamma are still in common use to this day.
In 1919, he became the first person to transform one element into another. This was achieved through an experimentation wherein alpha radiation was used to convert nitrogen into oxygen. As a result of the reaction, proton was discovered in 1920.
He published several successful books like ‘Radioactivity’ (1904); ‘Radioactive Transformations’ (1906); ‘Radiation from Radioactive Substances’, with James Chadwick and C.D. Ellis (1919, 1930); and ‘The Electrical Structure of Matter’ (1926).
Awards & Achievements
The Nobel Prize in Chemistry 1908 was awarded to Ernest Rutherford “for his investigations into the disintegration of the elements, and the chemistry of radioactive substances”.
He was knighted in 1914; in 1925, he was admitted to the Order of Merit and in 1931, he was raised to First Baron Rutherford of Nelson, New Zealand, and Cambridge.
He was elected Fellow of the Royal Society in 1903 and was its President from 1925 to 1930.
Amongst other honours, he received the Rumford Medal (1905), the Hector Memorial Medal (1916) and the Copley Medal (1922). He also received the Bressa Prize of the Turin Academy of Science (1910), the Albert Medal of the Royal Society of Arts (1928), the Faraday Medal of the Institution of Electrical Engineers (1930), and the T. K. Sidey Medal of the Royal Society of New Zealand (1933).
He received honorary doctorates from the Universities of Pennsylvania, Wisconsin, McGill, Birmingham, Edinburgh, Melbourne, Yale, Glasgow, Giessen, Copenhagen, Cambridge, Dublin, Durham, Oxford, Liverpool, Toronto, Bristol, Cape Town, London and Leeds. 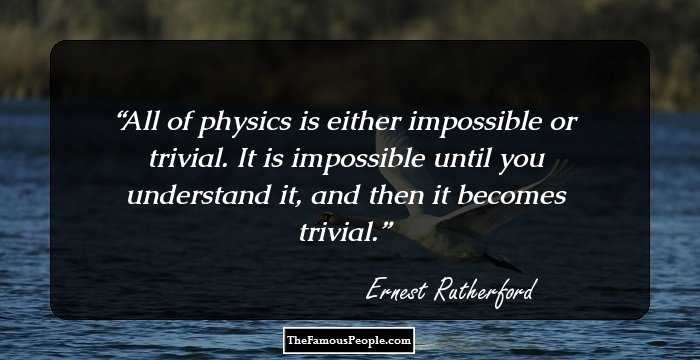 Quotes: You
Personal Life & Legacy
In 1900, Rutherford married Mary Georgina Newton, only daughter of Arthur and Mary de Renzy Newton. The couple had a daughter, Eileen Mary who married British physicist and astronomer, Ralph Fowler.
His favourite hobbies were golf and motoring.
He died after suffering from strangulated hernia on 19 October 1937, at the age of 66. He was interred at Westminster Abbey, near Isaac Newton and Lord Kelvin.

Quotes By Ernest Rutherford | Quote Of The Day | Top 100 Quotes

See the events in life of Ernest Rutherford in Chronological Order