John Tyndall was an Ireland born physicist and one of the most important scientists in the Victorian era in the United Kingdom. He was considered among the best experimental scientists of his era due to his rigour for scientific experiments as well as a sound knowledge of the apparatus that were used. John Tyndall was initially educated in his native Ireland and in fact even started working as a teenager but after he took up the job of a teacher of mathematics at a boarding school in Hampshire he decided to go to Germany for further education. In Germany he learnt the sciences and different processes involved in successful experiments from the leading scientists of the time that provided him a sound footing. Tyndall is credited with close to 150 different papers published over a period of 3 decades. In addition to that he wrote a number of text books that not only popularized the natural sciences among people but also helped students in getting a better understanding of the different scientific phenomena. Tyndall conducted extensive studies on the earth’s atmosphere, glacial flows, ozone and several other things that certainly mark him out as one of the busiest scientists of his time. Robert Boyle
Physicists #157
Scientists #586
2nd August In History
DID WE MISS SOMEONE?
CLICK HERE AND TELL US
WE'LL MAKE SURE
THEY'RE HERE A.S.A.P
Quick Facts

Cause of Death: Accidental Overdose Of Chloral Hydrate

Irish People
Leo Scientists
Male Physicists
Male Scientists
Irish Physicists
Childhood & Early Life
John Tyndall was born on 2 August, 1820 in the town of Leighlinbridge located in Country Garlow, Ireland. His father (also named John Tyndall) worked as a police constable in the town. His mother’s name was Sarah Tyndall. He had an elder sister.
He was initially educated at the schools located in his home town of Leighlinbridge and attended those schools till he was well into his teens. Other than mathematics, he had also studied land surveying at school.
In 1839, John Tyndall took up a job with the Ordnance Survey of Ireland in the capacity of a draftsman and three years later he started working for the Ordnance Survey of Great Britain.
He also worked as a teacher of mathematics at the Queenswood College boarding school located in southern England. Edward Frankland, the future chemist, was also a teacher at the school and on his advice, both Tyndall and Frankland took admission at the University of Marburg in Germany in 1848.
Tyndall was taught by such giants of the time like Robert Bunsen, Hermann Knoblauch and Heinrich Gustav Magnus in Germany. He completed his graduation and went back to England in the year 1951. 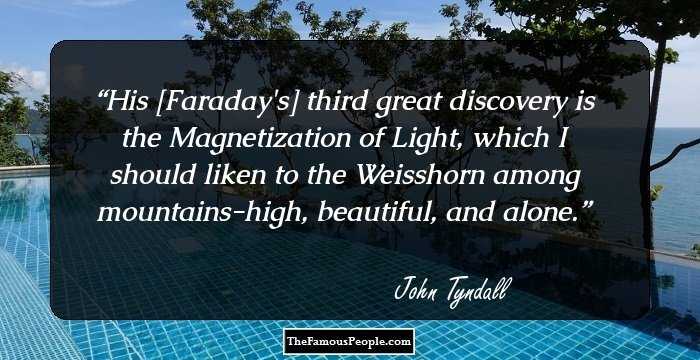 Quotes: Alone, Beautiful, I
Continue Reading Below
You May Like

The Hottest Male Celebrities With The Best Abs
Career
Upon his return to England, John Tyndall was elected as a Fellow of the Royal Society in 1851 and the following year he was appointed as the Professor of Natural Philosophy or Physics by the Royal Institute in London. Tyndall came into contact with the brilliant scientist Michael Faraday at the institute and it proved to be a very fruitful friendship.
Tyndall was initially involved in the study of the earth’s atmosphere and specifically worked on how much radiant heat the various gases in the earth’s atmosphere can absorb. It was in 1859 that he successfully worked out the absorptive capabilities of different gases. He also became the first person to prove the green house effect theory and is credited with the Tyndall Effect which is the process of showing particles in the air by bathing it in intense light.
In around 1864, John Tyndall also devised a system by way of which the percentage of carbon dioxide in an isolated sample of human breath could be measured and his system has been in use in modern medical science as anaesthetic experts use it to check on the condition of patients who are under the effects of anaesthesia. In the same year he deduced that Ozone is nothing but oxygen in clusters.
Tyndall worked on a variety of research endeavours for more than 30 years starting from 1850 and in total he published a total of 147 papers that dealt with subjects starting from the earth’s atmosphere to how the sun’s rays going through atmospheric molecules makes the sky appear blue.
In 1856, Tyndall spent some time in the Alps to study the movement of glaciers and glacial flow. In the process, he also became a mountaineer. Tyndall also made plenty of efforts in order to make the sciences more popular among the general public and delivered public lectures. He also wrote plenty of books on elementary science. He retired at the age of 66. 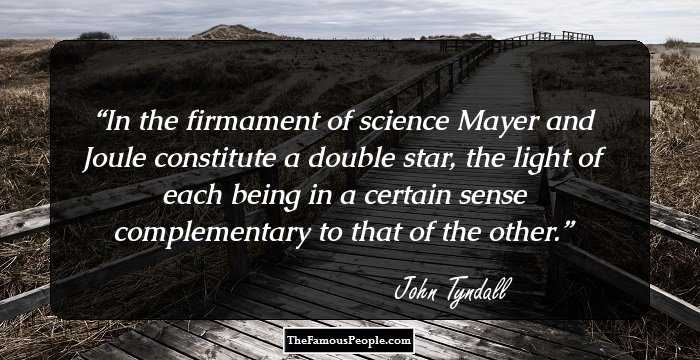 Major Works
Other than the relentless research that he conducted over 3 decades as an academic, he was responsible for making the natural sciences popular among the general public. However, his most important work was on the studies of the earth’s atmosphere that provided the basis for future research on the subject.
Awards & Achievements
In 1853, John Tyndall was awarded the Royal Medal.
In 1864, the Royal Society awarded him the Rumford Medal. 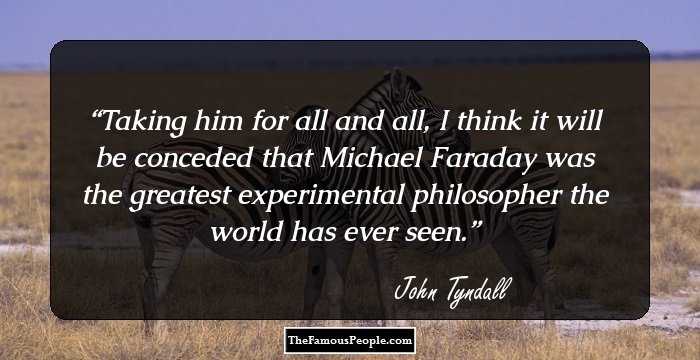 Quotes: Think, Will, I
Personal Life & Legacy
John Tyndall married Louisa Hamilton in the year 1876, when he was 55 years old. The couple had no children.
John Tyndall died at the age of 73 on 4 December, 1893 due to an unintended overdoes of cholera hydrate; a medicine he used to take to cure his insomnia.
You May Like

See the events in life of John Tyndall in Chronological Order