Anwar Sadat was the 3rd President of Egypt, following two terms as the Vice President under his friend Gamal Abdel Nasser. The two of them had worked in the military together and founded the ‘Free Officers’, which opposed British rule of the country. During World War II, Sadat was sympathetic to the Axis Powers and admired how they thwarted the British. Nasser then became President, and Sadat worked closely by his side until his untimely death. Sadat assumed the role and launched both the ‘Correction Revolution’ and the ‘Yom Kippur War’ to rid his country of extreme socialists. Over time, his methods became unpopular and uprisings occurred to oppose his rule. Perhaps he is best known for signing a peace treaty with Israel, after the Camp David Accords hosted by US President Carter. He won the Nobel Peace Prize, but citizens in his own country were less than thrilled by this move. The Sinai treaty with the Israel enraged the Islamists and they started plotting against the ruling government. After the Islamists plans of overthrowing the Government were thwarted, Sadat ordered a crackdown in which more than a thousand opposition leaders and members were arrested. Ultimately, an opposing group assassinated him during a victory parade. To know more about his life read on the following biography. Egyptian Celebrities
Male Leaders
Capricorn Leaders
Egyptian Leaders
Egyptian Presidents
Childhood & Early Life
Sadat was born to Anwar Mohammed El Sadat, from Upper Egypt, and Sit Al-Berain, from the Sudan. Sadat was frequently bullied in his early life for being of mixed decent.
He was born to a very poor family and was one of thirteen brothers and sisters. He was the favorite of his grandmother, who would tell him historical stories. In 1938, he graduated from the ‘Royal Military Academy’ in Cairo. 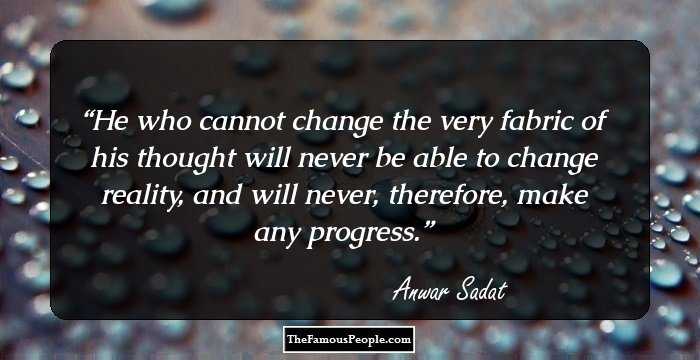 Quotes: Change, Never, Will
Continue Reading Below
You May Like

The Sexiest Men Of 2020, Ranked
Career
In 1939, he entered the army and was posted to Sudan where he met Gamal Abdel Nasser. Together they founded the ‘Free Officers’, a secret group that would aim to free their country from the British rule.
In the 1940s, he was imprisoned for helping the Axis Powers in WWII against the ruling British regime.
On July 23, 1952, the ‘Free Officers’ sparked a revolution that overthrew King Farouk. Sadat announced this news over the Egyptian radio.
In 1954, he was promoted to Minister of State under his friend, President Gamal Abdel Nasser. He also served as the editor for the news daily ‘Al Gomhuria’, founded after the country gained its independence from the British.
In 1959, he moved up in the ranks once more to serve as Secretary to the National Union. The following year, he served as President to the National Assembly and stayed there for eight years.
In 1964, he was elected as Vice President of Egypt under Nasser. He successfully retained his position five years later when he got re-elected.
In 1970, he assumed the role of President after Nasser’s death. It was public opinion that his presidency would not be a long one, as most viewed him simply a puppet of Nasser's.
On May 15, 1971, Sadat aimed to prove the citizens of Egypt wrong by launching his ‘Corrective Revolution’, aimed to rid the government of Arabic socialists and welcome an Islamic movement.
In 1971, Sadat supported a failed peace proposal for the ‘War of Attrition’ that was not accepted either by the US or Israel.
Continue Reading Below
On October 6, 1973, he launched the ‘Yom Kippur War’, which was a surprise attack against the Israeli occupation of the Sinai Peninsula. After this, he was known as the ‘Hero of the Crossing’.
In October of 1975, Sadat visited the US to get some religious support from Evangelical Christians. The following year, he visited the Vatican and got support from the Pope.
Things took a turn for the worse when in 1977 the ‘Bread Riots’ protested Sadat’s economic policy that raised prices of necessities, like bread.
Following the ‘Camp David Accords’ with the West, he signed a peace treaty with the Israeli Prime Minister in 1979, although it was unpopular in the Arab world, and they were suspended from the Arab League.
In February 1981, he ordered an extraordinarily unpopular arrest of over 1,500 people that opposed his regime.
On October 6, 1981, Sadat was assassinated during a victory parade as a direct result of his unpopular rulings by a Jihad cell led by Khalid Islambouli. Eleven other people were killed.
Major Works
He became the 3rd President of Egypt in 1970 and aimed to free the country from the oppressive socialist rule.
He launched the ‘Yom Kippur War’ in 1973 to get rid of the Israeli forces occupying parts of his country. The war was a success and astounded the entire Arab world.
He signed a peace treaty with Israel after the ‘Camp David Accords’ and was then awarded the ‘Nobel Peace Prize’.
Continue Reading Below
Awards & Achievements
He served as Prime Minister, Vice President, and President of Egypt.
In 1978, he was awarded the ‘Nobel Peace Prize’ in conjunction with Menachem Begin for signing the peace treaty at Camp David.
He won the ‘Prince of Peace Award’, given by a Southern Baptist minister, Pat Robertson.
Personal Life & Legacy
He was married to Ehsan Madi, but they divorced so he could marry Jehan Raouf in 1949. They had four children named Lubna, Noha, Gamal, and Jehan.
He wrote and published five books during his life, the most popular being his autobiography, ‘In Search of Identity’, released in 1978.
His widow worked in the US at the ‘University of Maryland’, where the ‘Anwar Sadat Chair for Development and Peace’ was established in 1997.
In 1983, a miniseries called ‘Sadat’ was aired on US television but banned in Egypt due to historical inaccuracy. A film was released in Egypt called ‘Days of Sadat’ and was an enormous success.
Trivia
He was the first Arab leader to officially visit Israel. He reportedly idolized both Gandhi, for his peaceful protests, and Nazi Germany, for their tactics against the British.
Famed actor Louis Gossett, Jr. portrayed him in the miniseries titled “Sadat.”
You May Like

See the events in life of Anwar Sadat in Chronological Order