Anatole France is the pseudonym of Francois-Anatole Thibault, a much celebrated novelist and critic of his times. His father was a bookseller and young Anatole spent most of his time around books; books were what he loved the most in the world. He is known to the world primarily as a poet and a novelist, but there are several other literary genres that he covered. He wrote novels, poems, social criticisms, memoirs, and plays. He began his literary career as a journalist writing articles and notices, before moving on to publishing his poems. Known for his irony and skepticism, he had been criticized by some of his detractors for being ‘vulgar’. His writings are categorized under mainstream French Classicism that continued in the tradition of the eighteenth century French literature. He found his first big success with ‘Le Crime de Sylvestre Bonnard’ a novel for which he won a prize from the Academie Francaise. He had an active interest in politics and participated in the Dreyfus Affair in support of Alfred Dreyfus, an army officer falsely accused of espionage. This incident became the base for his novel, ‘Monsieur Bergeret’. His other famous works include ‘L’lle des Pingouins’ and ‘Les dieux ont soif’. He won the Nobel Prize in Literature in 1921 for his brilliant literary achievements. French Celebrities
Poets
Novelists
Journalists
French Men
Childhood & Early Life
Anatole France was born in Paris. His father owned a bookstore that specialized in books on the French Revolution. He developed a deep love for books as he spent his early life around them.
He attended a private catholic school, the College Stanislas, in Paris. He also studied at the Ecole des Chartes. His school education is believed to have influenced his decision to pursue a literary career. 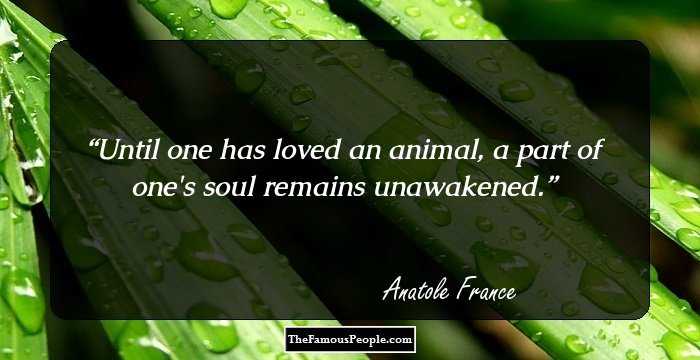 The Hottest Male Celebrities With The Best Abs
Career
He began his career by helping his father in running his bookstore. Later on he worked as a cataloguer at Bacheline-Deflorenne. During this time he also began to concentrate on writing.
His first published work was the poem ‘Les Legions de Varus’ which appeared in the Gazette rimee in 1867.
Two volumes of his poetry, ‘Poemes dores’ and ‘Les Noces corinthiennes’ were published in 1873 and 1876 respectively.
He secured the position of a librarian for the French Senate in 1876 and served there till 1890.
He moved on to fiction with his first novel, ‘Jocaste et Le Chat maigre’ in 1879.
It was his 1881 novel ‘Le Crime de Sylvestre Bonnard’ which established his reputation as a serious novelist. The personality of the protagonist, Sylvester Bonnard, a scholar, was modeled on the personality of the author himself.
Over the next few years he went on to publish novels such as ‘Les Desirs de Jean Servien’ (1882), ‘Abeille’ (1883) and ‘Balthasar’ (1889).
He published his first memoir, ‘Le Livre de mon ami’ in 1885.
The 1890s were the most productive years of the prolific novelist. He wrote many books over the decade, the best known of which are: ‘L’Etuide nacre’ (1892), ‘Le Lys rouge’ (1894), ‘L’Orme du mail’ (1897), and ‘L’Anneau d’amethyste’ (1899).
Continue Reading Below
His 1901 novel ‘Monsieur Bergeret’ was based on the Dreyfus Affair in which France had also taken part. In the Dreyfus incident, a Jewish army officer, Alfred Dreyfus, had been falsely accused of a crime he did not commit.
He wrote a play, ‘Crainquebille’ in 1903, and the same year he brought out the novel, ‘Histoire comique’. They were followed by his ‘Sur la pierre blanche’ in 1905.
The novel ‘L’lle des Pingouins’, which literally means Penguin Island, is a satirized fiction published in 1908. It was one of his best known books.
In 1912, his novel ‘Les Dieux ont soif’, a fictional tale set during the French Revolution was published. In this book he describes the horrors of the Reign of Terror in Paris.
In addition to novels and poems, he also wrote several pieces of literary as well as social criticism. 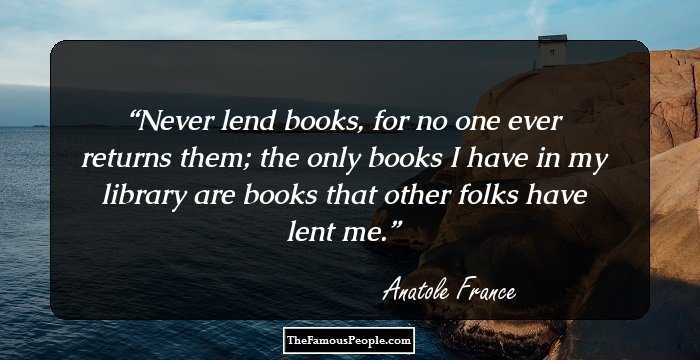 Quotes: Me, Never, Books, I
Major Works
His satirical novel, ‘L’lle des Pingouins’ (1908) tells the story of a Christian missionary who accidentally baptizes penguins thereby creating a problem for the God who only allows humans to be baptized.
One of France’s most intense novels is ‘Les dieux ont soif’ (1912), literally translated as ‘The Gods are Thirsty’. In the story set during the French revolution, the author vividly describes the tale of a young painter during the Reign of Terror in Paris.
‘La Revolte des Anges’ (1914) is regarded as one of his best works. It is about the story of Maurice and his guardian angel Arcade who joins hands with other angels in order to revolt against, and overthrow God.
Continue Reading Below
Awards & Achievements
He received a prize from the Academie Francaise for his novel ‘Le Crime de Sylvestre Bonnard’ (1881).
He was awarded The Nobel Prize in Literature in 1921 "in recognition of his brilliant literary achievements, characterized as they are by a nobility of style, a profound human sympathy, grace, and a true Gallic temperament". 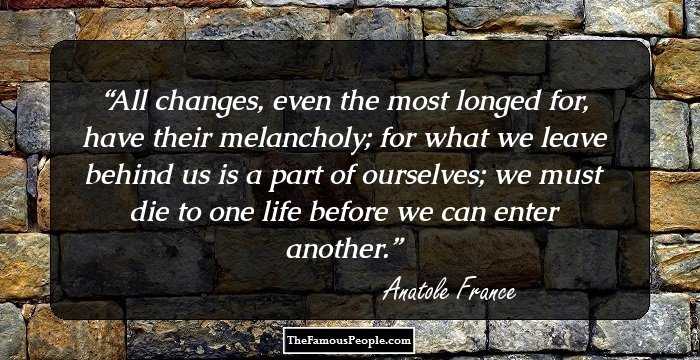 Quotes: Life
Personal Life & Legacy
He married Valeria Guerin de Sauville in 1877 and had a daughter with her. In spite of being married he used to have numerous relations with other women which ultimately led to the breakup of his marriage.
His popular lovers include Madame Arman de Caillavet and Mme Gagey.
He tied the nuptial knot again in 1920 with Emma Laprevotte.
He lived a long and productive life, and died at the age of 80 in 1924.
Trivia
The English writer George Orwell was a big admirer of this French writer.
He was criticized for his lack of creativity and originality by some critics.
Recommended Lists:
Writers #1839
Media Personalities #1854
You May Like

Quotes By Anatole France | Quote Of The Day | Top 100 Quotes

See the events in life of Anatole France in Chronological Order