Marcel Proust, whose novels inspired a whole generation of great writers, is regarded as one of most acclaimed writers of the modern times. This twentieth century novelist was known to have as much impact on literature, as Tolstoy had during the nineteenth century. His writing was so compelling and impressive that even the great English writer Virginia Woolf once exclaimed “Oh if I could write like that!". Born during the Fourth French Revolution, Proust grew up witnessing a lot of turmoil in the society. His magnum opus ‘In Search of Lost Time’, which earned him great fame and recognition, describes the society plagued by chaos and absurdities brought about by industrialization. The beautiful and the awe-inspiring nature, which had been the subject and the muse of poets and writers of the previous ages, began to fade with the beginning of industrialization. But, Proust was among those few people who found inspiration to write, despite all the cynicism. Alphonse Daudet
DID WE MISS SOMEONE?
CLICK HERE AND TELL US
WE'LL MAKE SURE
THEY'RE HERE A.S.A.P
Quick Facts

French Celebrities
French Men
Male Writers
Cancer Writers
French Writers
Childhood & Early Life
Marcel Proust was born as Valentin-Louis-Georges-Eugene-Marcel Proust to Achille Adrien Proust, a famous doctor in Paris.
He was just nine when he had a serious asthma attack. After the incident, his parents were extremely careful about his health and did not allow him to attend school as a regular student initially.
In 1882, he attended the Lyc�e Condorcet School but his education was again interrupted due to illness. Nevertheless, he received an award for displaying extraordinary skills in literature in the final year. 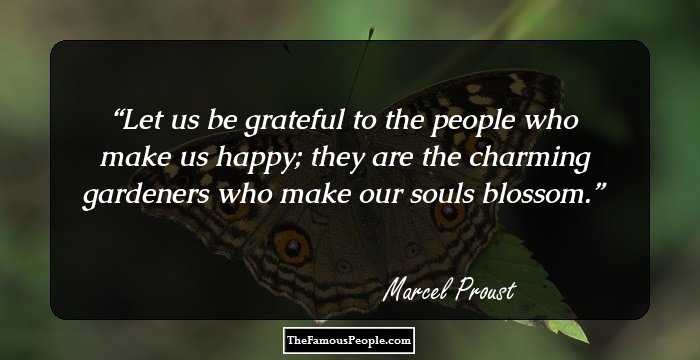 Continue Reading Below
Career
Proust served in the French army from 1889 to 1890, during which he was stationed at the Coligny Barracks in Orl�ans. From 1890 to 1891, he contributed columns to the journal ‘Le Mensuel’.
He was also one of the founding members of the literary periodical called ‘Le Banquet’ in which he published a number of articles.
In 1896, he published his first book titled, ‘Les Plaisirs et les Jours’, which comprised a collection of essays, short stories and poems.
Proust tried to write a novel but did not succeed and began translating and interpreting the works of the English art historian, John Ruskin.
The year 1908 proved beneficial for him as he began writing satires on the works by other writers, all of which were published in the daily newspaper ‘Le Figaro’.
These writings rendered him the confidence to expand the horizon of his works. Thus, he began writing essays, articles and short stories, eventually merging and developing them into a single novel.
He converted his essay ‘Contre Sainte-Beuve’, into a single novel in 1909. He titled it as ‘� la recherche du temps perdu’ and the first part of the novel ‘Du C�t� de chez Swann’ was published in 1913.
In 1919, the second part of the novel ‘� l’ombre des jeunes filles en fleurs’, was published. Proust published the last three volumes during the last three years of his life. 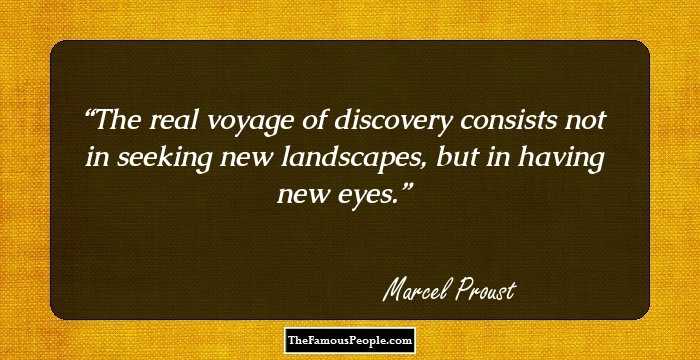 Major Works
His masterpiece ‘� la recherche du temps perdu’, translated as ‘In Search of Lost Time’ in English, was called the “greatest novel of the 20th century” by Graham Greene, and “greatest fiction to date” by W. Somerset Maugham.
Personal Life & Legacy
Proust was a homosexual and was one of the first European novelists to write on the subject of homosexuality.
The writer was deeply affected by the death of his mother in September 1905.
After the death of his mother, his health began to deteriorate and he spent the last three years of his life in his cork-lined bedroom.
He died of pneumonia and a pulmonary inflammation and was buried in the P�re Lachaise Cemetery in Paris. 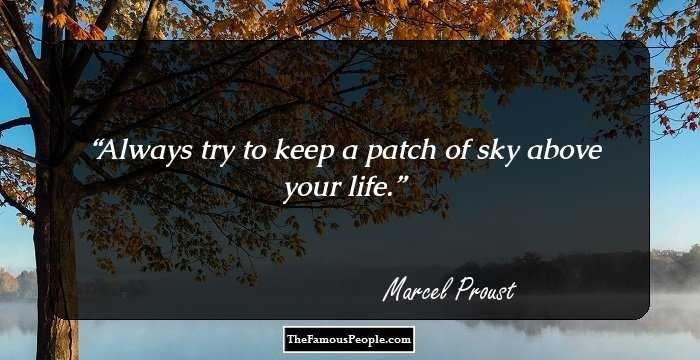 Quotes: Life
Trivia:
This famous novelist was homosexual and never married. He was known to have an affair with Reynaldo Hahn, a composer, conductor, music critic, diarist and singer.

Quotes By Marcel Proust | Quote Of The Day | Top 100 Quotes

See the events in life of Marcel Proust in Chronological Order