Marie-Henri Beyle, better known as Stendhal, was a famous French writer of the 19th century. He became known for his critical analysis of characters’ consciousness. He is also considered one of the forerunners of ‘realism’. Some of his most popular realist works include ‘The Red and the Black’ and ‘The Charterhouse of Parma’, both of which were originally written in French and translated to English much later. His works were considered extremely unique and complex compared to the other writers of the 19th century. His secret goal was to become a literary master; one who was adept and successful as a playwright as well as a novelist. However, that dream struck a roadblock when he was appointed as an intendant-general of Napoleon’s army. However, this appointment gave him a number of life-long lessons and experiences pertaining to the Napoleonic regime and the war situation in Europe. Once the war ended, his literary calling became irrevocable and he began to pen his insights on a wide variety of topics, which went on to become some of his literary masterpieces. He was unusual in his style of writing and was known for his good-humor and wit, which reflected in his works. Antoine de Sain...
Novelists #192
Writers #497
DID WE MISS SOMEONE?
CLICK HERE AND TELL US
WE'LL MAKE SURE
THEY'RE HERE A.S.A.P
Quick Facts

French People
French Men
Male Writers
French Writers
Male Novelists
Childhood & Early Life
Stendhal was born as Marie-Henri Beyle on January 23, 1783 to Cherubin Beyle and Henriette Gagnon, in Grenoble. He had two sisters – Pauline (he was extremely affectionate towards her) and Zenaide (he was not very close to her).
During the French Revolution that began in 1798, his mother fell ill and passed away the following year. Her death had a lasting impact on young Henri, following which he couldn’t seem to connect with his father.
In 1792, a governor was employed to look after Henri, who was extremely cold and authoritarian towards him. Young Henri lost faith in religion as a result and became an atheist.
He studied at the Ecole Centrale de Grenoble and was extremely proficient in mathematics, drawing and literature. In 1799, he left Grenoble to take a competitive exam in Paris, but failed to give it. He was instead, appointed in the Ministry of War. 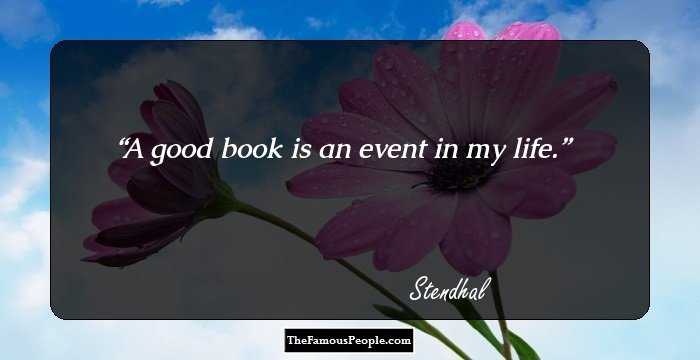 The Best Black Actresses Of All Time
Career
In 1810, he was made the auditor with the Conseil d’Etat, following which he was enrolled in Napoleon’s administration.
During this period, he travelled widely in Germany and was a part of Napoleon’s army during the invasion in Russia, in 1812. The same year, he began his work on a ‘History of Painting in Italy’, but eventually lost the manuscript for the same.
In 1814, he penned the ‘Letters on Haydn, Mozart and Metastasio’, which was later declared as plagiarized.
He published, ‘Rome, Naples et Florence’ in 1817 along with the publication of ‘History of Painting in Italy’. These works also became the first works that were signed under the name. ‘Stendhal’. The following year, he began to write about the life of Napoleon.
In 1820, frustrated by a failed love affair, he started to write ‘On Love’, a psychological elucidation of love. The next year, he was forced to leave Milan, which was a part of the Austrian Empire at the time, because the Austrian government believed him to be a spy.
‘On Love’ was published in 1822, followed by ‘Racine et Shakespeare’ the subsequent year. The latter was written in support of the English playwright, who at the time, was criticized by the French literati. The same year, he published his first grand success; ‘Life of Rossini’.
In 1825, he published the second edition of ‘Racine et Shakespeare’ and he also penned, ‘D’un nouveau complot contre les industriels’. Two years later, he published his first novel, ‘Armance’, which got poor reception.
In 1829, he published a travel guide, ‘Promendades dans Rome’ and also published a short story, ‘Vanina Vanini’. The next year, he published what is currently considered his masterpiece, ‘The Red and the Black’.
He authored, ‘Souvenirs of egotism’ in 1832, which was a collection of autobiographical writings and begins. The same year, he also penned ‘A Social Position’.
Continue Reading Below
In 1835, he started his work on his autobiography ‘The Life of Henry Brulard’. Two years later, he worked on ‘The Pink and the Green’ (which was unfinished) and ‘Memoirs of a tourist’.
In 1838, ‘Memoirs of a tourist’ was published, which was considered his first major work since, ‘The Red and the Black’. The subsequent year, ‘La Chartreuse de Parma’, another one of his career highlights, was published. The same year, he published a collection of short stories titled, ‘Chroniques italiennes’.
He started work on ‘Lamiel’, but it remained unfinished because his health deteriorated, which was followed by his untimely death. 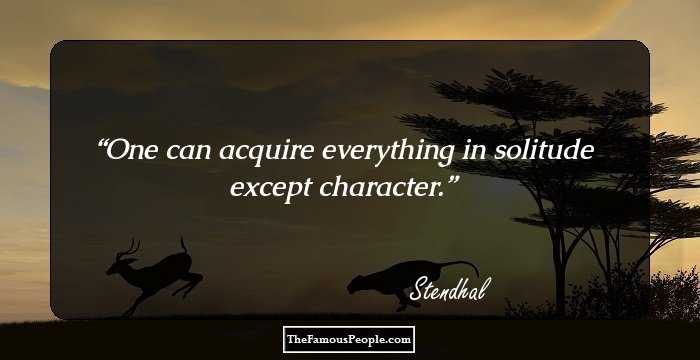 Quotes: Character
Major Works
One of his most celebrated works; ‘The Red and the Black’ was published in 1830 - it was published in two volumes. It became extremely popular after its publication, because it was considered a novel that was ahead of its time and was also regarded as one of the greatest literary contributions. Since its initial publication, the novel was translated to English in 1900 and was also revised and republished. The book became so popular that it even spawned a number of films including, ‘Le Rouge et le Noir’ and a BBC miniseries, ‘The Scarlet and the Black’.
Personal Life & Legacy
Throughout his life, he was involved in a number of relationships and affairs with women including Angela Pietragrua, Melanie Guilbert, Mina de Griesheim, Angeline Bereyter, Mathilde Dembowski, Countess Clementine Curial and even his first cousin, Alexandrine Daru.
Towards the end of his life, he experienced two apoplectic fits - the second one took his life. He passed away in his apartment at ‘rue Neuve des Capucines’ in Paris on March 23, 1842.
The ‘Stendhal Syndrome’, a violent tremor of the heart, was named after this illustrious French personality. The condition was named after him in 1979 by Italian psychiatrist, Dr. Graziella Magherini and is still widely considered a medical condition today. 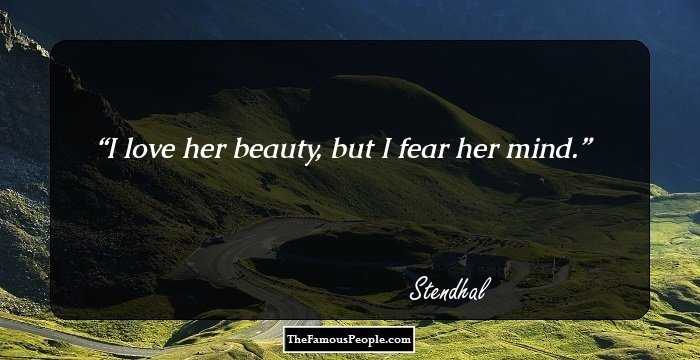 Quotes: Love, Fear, I
Trivia
The ‘Stendhal Express’ in Trenitalia was named in this French writer’s honor.
You May Like

Quotes By Stendhal | Quote Of The Day | Top 100 Quotes

See the events in life of Stendhal in Chronological Order