Advanced Search
Born in a family of educators, Pais was a bright student since his childhood days. He was interested in languages and learnt English, French and German in high school. It was during his college days that he was drawn to exact sciences and later went on to pursue his doctorate in theoretical physics. Being Jewish, Pais and his family faced grave dangers during the World War II but he and his parents survived the war with the help of some non-Jewish friends. His sister Annie was killed in the concentration camps. Working with the likes of Niels Bohr and Albert Einstein, after the war, he had an enriching experience. His theories on ‘associated production’ and composition of the sub atomic particle ‘Kaon’ were pioneering works in nuclear physics. His books on history of modern physics were famous among the patrons of science all over the world. Albert Einstein’s biography written by this prominent science historian is considered one of his best works. He continued to work even after retiring as a Professor Emeritus from the Rockefeller University. In his memory, the American Physical Society has been awarding ‘Abraham Pais Prize for History of Physics’ since 2005. To know more about his life and works read on. Frits Zernike
DID WE MISS SOMEONE?
CLICK HERE AND TELL US
WE'LL MAKE SURE
THEY'RE HERE A.S.A.P
Quick Facts

American Celebrities
Dutch Celebrities
Dutch Men
Male Scientists
Male Physicists
Taurus Scientists
Childhood & Early Life
Pais was the eldest child born to his Jewish parents Isaiah Jacques Pais and Kaatje Cato van Kleeff in Amsterdam on May 19, 1918. Isaiah and Kleeff had met each other during their training for teaching in elementary-school. Kleeff left her job after their marriage.
The young Abraham, a sharp witted student, loved reading and completed elementary education to enrol in a burgher school at the age of 12. He passed his exams with stellar grades to top the school.
He started pursuing his higher studies from the ‘University of Amsterdam’ in 1935. His rendezvous with Professor George Uhlenbeck during some guest lectures at the university marked the beginning of Pais’s tryst with particle physics.
He graduated from the university with two B.S. degrees in mathematics and science in 1938. Maintaining correspondence with Uhlenbeck, he enrolled to the ‘University of Utrecht’ in the same year to pursue graduate studies. 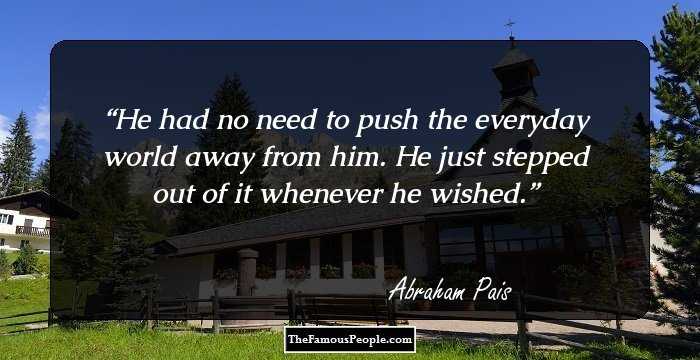 Quotes: Need
Continue Reading Below
Career
While at the university, Pais got involved in research on various topics related to experimental physics. He also came in close contact with eminent researchers like Hendrik Casimir who was researching on quantum physics.
In 1939, he was guided and mentored by physicists Leonard Salomon Ornstein and Hendrik Anthony Kramers. Through Leon Rosenfeld, who was visiting Utrecht to deliver a seminar, he came to know about the ‘Meson theory’ of nuclear forces.
For his doctoral degree, he worked under Rosenfeld, who was appointed Uhlenbeck’s successor at the ‘University of Utrecht’ in 1940, after clearing his examinations for the master’s degree.
As an assistant professor, he based his thesis on the works of Rosenfeld and Moller, who studied the probability of disintegration of the highly stable nucleus of deuterium upon being bombarded by energetic photons.
In 1940, only days before the Germans imposed a ban on awarding doctorates to Jewish fellows, Pais completed his thesis, and even received his degree.
During World War II, he took refuge with a friend and managed to escape deportation to concentration camps. Over the course of the war, he changed nine hideouts with the help of Tina Strobos, his college friend.
However, in 1945, the Germans arrested him and his wife Jeanne and two of his other fugitive friends. The two women, Jeanne and Trusha, were released but Pais and friend Lion Nordheim were retained for interrogation. Though he was lucky enough to be released days before the war was over, Lion was executed.
After the war, in 1946, he worked under Niels Bohr at the ‘Institute of Theoretical Physics’ in Copenhagen. He assisted Bohr in the latter’s research for over a year.
The ‘Institute for Advanced Studies’ at ‘Princeton University’ in New Jersey offered Pais a fellowship, in 1947, which he accepted. It was here that he met Albert Einstein, whose biography he later authored.
Continue Reading Below
In 1951, this budding physicist became a professor at ‘Princeton’, where he studied the behaviour of subatomic particles. He explained a phenomenon, where certain particles, which are created rapidly in pairs have a relatively slow rate of decay in isolation. The process was designated as ‘Associated Production’.
Apart from that, one of his contribution to particle physics was the theory he propounded along with physicist Murray Gell-Mann, in relation to the composition of sub-atomic particle ‘Kaon’, and the property of particles called ‘strangeness’.
In 1963, he was appointed the head of theoretical physics department at the ‘Rockefeller University’. He retired from the university as ‘Detlov W. Bronk Professor Emeritus’ after serving there for a quarter of a century.
Having an interest in language since school days and being an avid reader, he started chronicling the works on modern physics, during the latter part of the 1970s.
His biography on Albert Einstein, titled 'Subtle is the Lord—: The Science and Life of Albert Einstein' which was published by the ‘Oxford University Press’, is one of his most acclaimed works.
The ‘Inward Bound: Of matter and forces in the physical world’, is a chronological account of the developments which occurred in the field of Physics, was published in 1988. In this book Abraham mentions the events occurring during the past hundred years.
In 1991, he also came out with a book on the life and works of Niels Bohr. This work, titled ‘Niels Bohr's Times: In Physics, Philosophy, and Polity’ was published by the ‘Oxford University Press’.
The sequel to his first book on Einstein, titled 'Einstein Lived Here (Clarendon Press/Oxford University Press, 1994)', was published in the year 1994.
He also penned his autobiography 'A Tale of Two Continents: A Physicist's Life in a Turbulent World' in 1997. Abraham has described the story from different perspectives.
Continue Reading Below
During his lifetime he authored the biographies of many physicists he had a chance to work with or develop acquaintance and later brought out a compilation titled ‘The Genius of Science: A Portrait Gallery’. The book which was published in 2000 contains biographies on seventeen noted physicists.
After retirement Pais spent half of his time working in the ‘Neils Bohr Institute’ in Denmark, and the other half in his scientific literatures.
Major Works
Pais is known for his works on particle physics. The theory on ‘associated production’ and composition of Kaon particles are his major contribution to the field of nuclear physics.
His biography on Albert Einstein ‘Lord is Subtle’ is acclaimed as one of the finest biographies of a scientist ever written. The book even won the ‘US National Book Award’.
Awards & Achievements
In 1976, Pais was honoured with the ‘Robert Oppenheimer Memorial Prize’ for his contribution to particle physics.
The ‘Rockefeller University’ presented him the ‘Lewis Thomas Prize’ for his writings on the scientific community in 1995.
Personal Life & Legacy
Abraham Pais was married to Jeanne who was arrested along with him by the Gestapo during the World War II. Later he got married to Lila Lee Atwil. Ida Nicolaisen was his third wife, with whom he spent the last days of his life. Abraham’s son Josh Pais is a Hollywood actor.
He died of heart failure in 2000 at Copenhagen. In his last days he was working on a biography of Robert Oppenheimer.
Trivia
"One of the strangest things I learned, one of the strangest things, is how to think. There was nothing else to do. I couldn't see people, or go for a walk in the forest. All I had was my head and my books, and I thought a lot.", is a quote by the famous Dutch-American physicist.

See the events in life of Abraham Pais in Chronological Order 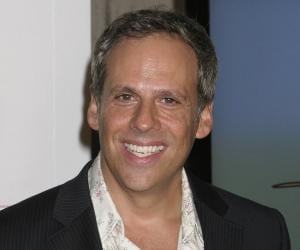