Christiaan Huygens played an essential role in some of the most incredible discoveries in math, astronomy and physics. His role in scientific history touches everything from what we now understand about the theory of light waves in three dimensions, to the concept of centrifugal force, to even basic things that are now learned in elementary school classes, such as astronomy behind the rings of Saturn. Huygens's creative and scientific processes were intertwined from an early age through simple actions like throwing a rock into the water and watching the emanating pattern of waves and playing with windmills. These actions ultimately led to a life of experimentation and observation across multiple scientific disciplines. With influence and encouragement from other well-known scholars, like French polymath Marin Mersenne and mathematician René Descartes, Huygens leveraged his wealthy middle-class upbringing to learn and develop his own ideas based on the teachings of some of the greatest mind of his time. Combined with his own intelligence and creativity, he went on to impact the lives of thousands, from sailors to academics, with his scientific theories and inventions. Read on, to know more about the achievements, and contribution of this eminent physicist to the scientific world Hendrik Lorentz
14th April In History
DID WE MISS SOMEONE?
CLICK HERE AND TELL US
WE'LL MAKE SURE
THEY'RE HERE A.S.A.P
Quick Facts

Dutch People
Astronomers
Mathematicians
Dutch Men
Aries Scientists
Childhood & Early Life
Christiaan Huygens was born on April 14, 1629 to Constantijn Huygens and Suzanna Van Baerle in The Hague, capital city of South Holland.
Unfortunately, his mother died shortly after giving birth to his youngest sister Suzanna in 1637.
As a child of a wealthy and influential family, Huygens had the resources available for him to study under private tutors and had access to some of the finest scholars through his father, a well-known poet.
Huygens's affluence allowed for an education at the ‘University of Leiden’ starting in May of 1645, studying both law and mathematics. After two years, he then transferred to the ‘College of Orange’ at Breda where his father worked as a curator. 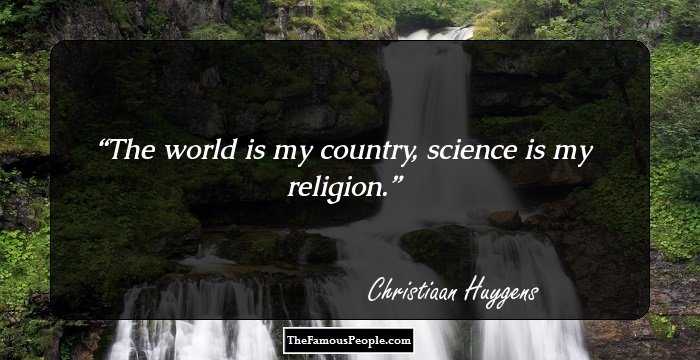 Continue Reading Below
Career
Although records of Huygen's unpublished work date back to 1649 with 'De iis quae liquido supernatant', his first major work that was published was titled 'Theoremata de quadratura'. This discourse, published two years later, was a refutation of Gregory of St. Vincent’s work on the quadrature of the circle.
In 1654, Christiaan published 'De Circuli Magnitudine Inventa'. This work helped him acquire a growing mathematics reputation in Europe, paving the way for his success in intellectual and social circles in Paris a year later.
In 1656, he began grinding his own lenses for telescopes with his brother Constantijn, which led to the invention of the two lens ‘Huygenian eyepiece’. His work with lenses helped him discover the Saturnian moon, Titan. His further work on the telescope designs led to the discovery of the stellar components of the Orion nebula, in the same year.
By 1658, Christiaan's interests in astronomy created a drive towards more accurate time measurements. This spurred his invention of the pendulum as a way to regulate clocks with an accuracy of only a one minute a day off. He later went on to reduce this error time and publish his thoughts in 'Horologium'.
In 1659 he discovered the true shape of Saturn's rings, further increasing his popularity in Europe.
During the years 1666 to 1681 he resided in Paris, where he published one of his largest and greatest works called 'Horologium Oscillatorium'. This work was partially dedicated to Louis XIV, which caused backlash against him as France was currently at war with Holland.
In 1666, he became one of the founding members of the ‘French Academy of Sciences’.
Christiaan returned to Holland in 1681 because of illness, and was unable to return to Paris due to political problems following the death of Jean-Baptiste Colbert.
A visit with Sir Isaac Newton in 1689 led to Huygen's own mechanical explanation of gravity with his publishing of 'Discours de la cause de la pesanteur' a year later, followed by his own mechanical explanation of the nature of light with 'Traité de la Lumière'.
Continue Reading Below
Huygen's last work 'Cosmotheoros' was published posthumously in 1698, and examined the likelihood of extraterrestrial life. 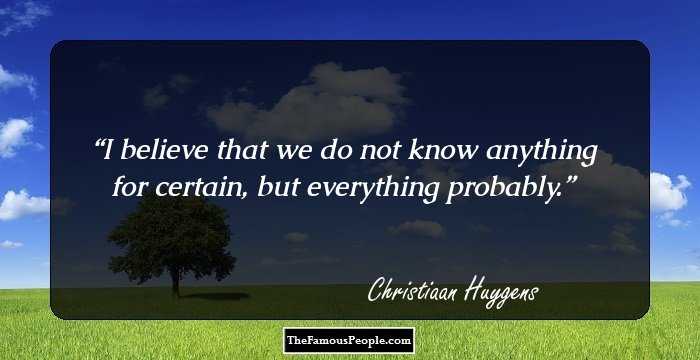 Quotes: Believe, I
Major Works
His 1673 book ‘Horologium Oscillatorium sive de motu pendulorum’, or 'Theory and Design of the Pendulum Clock' discussed his work within pendulums and how they relate to the study of time.
His work ‘Discours de la cause de la pesanteur’, or 'Discourse on the Cause of Gravity' published in 1690, was Huygen's response to Newton's theories of gravitation.
Another 1690 publication, ‘Traité de la Lumière’ or the 'Treatise on Light' was an explanation on the mechanics of the nature of light, including secondary wave fronts, reflection and refraction.
Personal Life & Legacy
Christiaan Huygens led a solo life and never married nor had children.He suffered from severe depression, which worsened during the last five years of his life after the death of his father in 1687.
His father left the mansion Hofwijck to him, which is where he made his home up until his death in 1695.
The last five years of Huygen's life were spent in pain and dealing with severe illness. He died on July 8, 1695 at the age of 66 from his illness and was laid to rest in ‘Grote Kerk’, a protestant church in Haarlem, Netherlands.
Some of Huygens's inventions are displayed at the ‘Museum Boerhaave’ in Leiden, which includes some of his lenses and instruments.
Due to his work with telescopes and his associated discoveries, the brighter interior of the Orion Nebula is called the Huygenian region.
Trivia
Huygens played an important role in reducing the size and bulk of wrist watches by reconstructing their internal components.
Recommended Lists:
Inventors #36
Scientists #96
Inventors & Discoverers #71

See the events in life of Christiaan Huygens in Chronological Order