Advanced Search
William Tecumseh Sherman was an American soldier who rose to the rank of General during the American Civil war. 16-year-old Sherman joined the United States Military Academy, and after graduation started his service as Second Lieutenant in the 3rd U.S. Artillery. He was promoted as Captain, but resigned and held various jobs including that of a bank manager, lawyer, First Superintendent of the Louisiana military academy, and president of St. Louis Railroad company. With Lincoln calling for volunteers to quell secession, Sherman offered his service. He put up impressive action in First Battle of Bull Run, and provided logistical support to Brig. Gen. Grant for capture of Fort Donelson. His successful Union counterattack at Shiloh left him wounded in the hand and shoulder. At the Battle of Collierville, Tennessee, he successfully defended an attack by a 3,500 strong Confederate cavalry, and in the Battle of Chattanooga, he took Billy Goat Hill. However, his invasion of Georgia, and the capture of Atlanta city ensuring Republican candidate Lincoln’s presidential re-election, can be singled out as his biggest contribution to the Union. His March to the Sea saw the capture of the port of Savannah, Georgia. He further consolidated the Union victory by capturing South and North Carolina. He published a first-hand account of the Civil War, in his book ‘Memoirs’. American People
American Men
United States Military Academy
Male Leaders
Aquarius Leaders
Childhood & Early Life
William Tecumseh Sherman was born on February 8, 1820, in Lancaster, Ohio, to Charles Robert Sherman, a lawyer, and Mary Hoyt Sherman.
After his father’s unexpected death, his neighbour Thomas Ewing, an attorney and a prominent member of the Whig Party, raised nine-year-old Sherman.
At the age of 16, he joined the United States Military Academy at West Point as a cadet. He excelled academically, but did not like the system, and treated it with indifference. 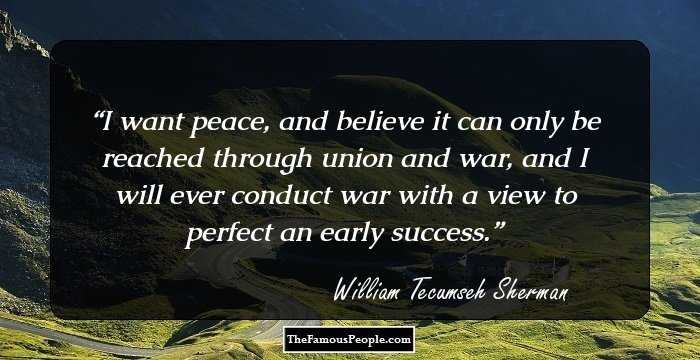 Quotes: War, Will, Believe, Peace, I
Continue Reading Below
Career
In 1840, Sherman graduated, and started service as Second Lieutenant in the 3rd U.S. Artillery. He saw action in the Second Seminole War in Florida, but was not posted at the war front.
In 1850, he was promoted to the rank of Captain. But due to lack of combat assignment, he resigned from the army and became bank manager of Lucas, Turner & Co.’s San Francisco branch. After the branch closed, he relocated to New York.
With the financial Panic of 1857, he closed the New York branch. He tried practicing law. He then accepted the post of First Superintendent of the Louisiana State Seminary of Learning & Military Academy.
In 1861, more Southern states were seceding from the Union. Sherman was required to accept receipt of arms surrendered to the State Militia by the U.S. Arsenal in Louisiana. Instead of complying, he resigned as superintendent because he could not bear to act or think any thought hostile to the United States.
After resigning, he went to the Washington D.C. He met Abraham Lincoln and shared his view about the the North's poor state of preparedness. But he found Lincoln unresponsive.
He became president of St. Louis Railroad company. He declined a position in the War Department in April 1861.
After the bombardment of Fort Sumter, Lincoln called for 75,000 three-month volunteers to quell secession. Sherman offered his service, and was summoned to Washington.
Commissioned as Colonel of the 13th US Infantry regiment in May 1861, an impressive action in the First Battle of Bull Run saw him promoted to Brigadier General of Volunteers under Robert Anderson in Kentucky.
He succeeded Anderson, and became pessimistic after shouldering the military responsibility for Kentucky. He insisted on being relieved, was transferred to Missouri, considered unfit for duty by Maj. Gen. Halleck, and put on leave.
Continue Reading Below
He returned to service, and provided logistical support to Brig. Gen. Grant for capture of Fort Donelson. He was then assigned to West Tennessee as Commander of the 5th Division under Grant in 1862.
After a surprise Confederate attack, he provided a successful Union counterattack at Shiloh where he was wounded in the hand and shoulder. He was promoted to Major General of Volunteers on May 1, 1862.
In July 1862, Sherman became the military governor of occupied Memphis. In December, his forces were driven back at the Battle of Chickasaw Bayou. His XV Corps was ordered to join Maj. Gen. McClernand.
He performed well under Grant’s supervision in the successful Vicksburg Campaign of 1863. He was made Brigadier General in the regular army, in addition to his rank as a Major General of Volunteers.
He took command of the Union garrison of 550 men at the Battle of Collierville, Tennessee, on October 11, 1863, and successfully defended an attack by a 3,500 strong Confederate cavalry.
Sherman succeeded Grant in command of the Army of the Tennessee. During the Battle of Chattanooga in November 1863, he took Billy Goat Hill, but his troops were repeatedly repulsed at Tunnel Hill.
He began the March to the Sea with 62,000 men to the port of Savannah, Georgia, causing much damage to property on the way. His troops captured Savannah on December 21, 1864.
Sherman met General Johnston to negotiate a Confederate surrender. Without authorization, he agreed to terms dealing with political and military issues. Johnston’s army and the Confederate forces in the Carolinas, Georgia, and Florida surrendered.
With 60,000 of his troops, he proceeded to Washington, D.C., where they marched in the Grand Review of the Armies, on May 24, 1865, and were then disbanded marking the civil war’s end.
On July 25, 1866, Sherman was promoted as Lieutenant General. Three years later, he was promoted to General of the US Army. He also served for one month as interim Secretary of War. 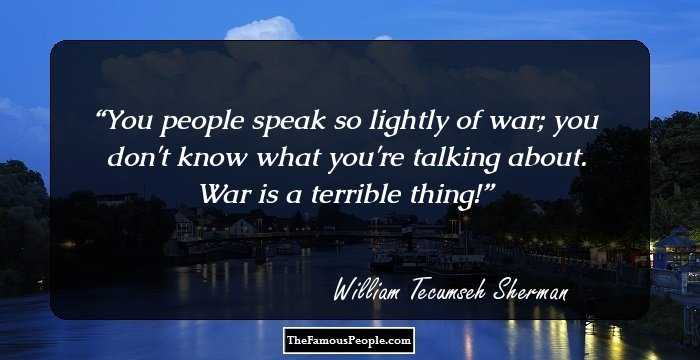 Quotes: You, War
Major Battles
Sherman invaded Georgia, and captured Atlanta city on September 2, 1864 ensuring Republican candidate Lincoln’s presidential re-election. Otherwise, the Democratic Party would have acknowledged the Confederacy’s independence, resulting in states’ seceding from the Union.
He captured South Carolina’s capital, Columbia on February 17, 1865. His troops then marched into North Carolina, and defeated Confederate General Joseph E. Johnston’s troops at the Battle of Bentonville.
Personal Life & Legacy
In 1850, Sherman married Eleanor Boyle “Ellen” Ewing, daughter of Thomas Ewing, Secretary of the Interior, in a ceremony in Washington, attended by President Zachary Taylor and other political leaders.
He published a first-hand account of the Civil War in his book ‘Memoirs’, published in 1875.
He died on February 14, 1891, at the age of 71, in his sleep. President Benjamin Harrison ordered all national flags to be flown at half mast. 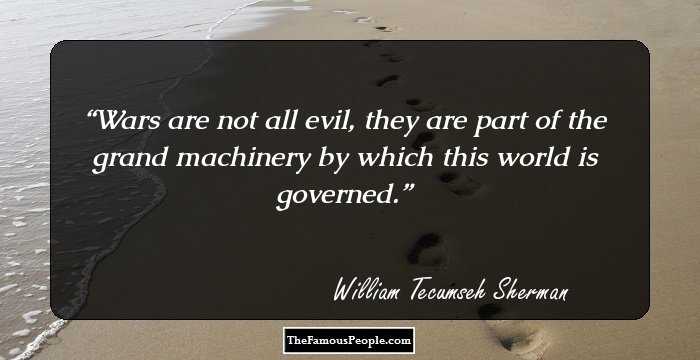