Sitting Bull was a Teton Dakota Indian chief who led Sioux tribes in their struggle for survival on the North American Great Plains. He was a Hunkpapa Lakota holy man who had a lifelong distrust of white men and actively resisted the United States government policies as a tribal chief. Born into the Hunkpapa division of the Teton Sioux, he grew up to be a fearless and brave young man. He was barely in his teens when he first joined a war party and became a leader of the powerful Strong Heart warrior society. He was also involved with tribal welfare and emerged as a valiant tribal chief who helped extend the Sioux hunting grounds westward into what had been the territory of the Shoshone, Crow, Assiniboin, and other Indian tribes. He developed hostilities with the United States army when it started invading the Sioux hunting grounds and confrontations with the army escalated when gold was discovered in the Black Hills—a region sacred to the Native Americans—in the mid-1870s. Sitting Bull was highly distrustful of the white men who violated the rights of the Native Americans time and again, and led fierce battles resisting the United States government policies. He fought for the natives’ rights till the very end and was killed by policemen hired by United States Indian agents because the authorities were beginning to fear him.
Continue Reading Below American People
Military Leaders
American Men
Male Leaders
American Leaders
Childhood & Early Years
Sitting Bull was born in Dakota Territory around 1831 to Jumping Bull (father) and Her-Holy-Door (mother) into the Hunkpapa division of the Teton Sioux. He was named Jumping Badger at birth and was conferred the name of Sitting Bull as a teenager.
He grew up to be a skilled warrior and a brave young man. He accompanied a group of Lakota warriors as a 14 year old as a part of a raiding party to take horses from a camp of Crow warriors. He displayed great valor during the raid despite his young age, and a ceremony was held after the successful raid to mark the boy’s passage into manhood as a Lakota warrior.
As a young man, he was chosen as leader of the Strong Heart Society of warriors, and later became involved with the Silent Eaters, a select group concerned with tribal welfare. As a tribal leader he helped extend the Sioux hunting grounds. 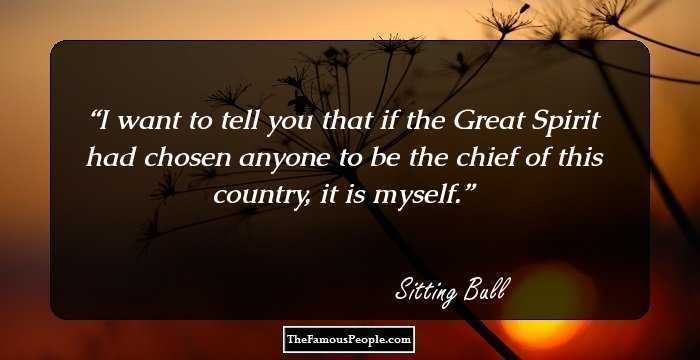 The Most Popular US Veterans
Later Years
He fought against the United States army for the first time in June 1863, and again fought against them the following year at the Battle of Killdeer Mountain.
He proved himself to be a very courageous warrior and led an attack on the newly built Fort Rice in what is now called North Dakota in 1865. The very next year, he was made the principal chief of the northern hunting Sioux, with Crazy Horse, leader of the Oglala Sioux, as his vice-chief.
An intelligent and fearless leader, he was much respected and appointed the principal chief of the entire Sioux nation around the year 1867. After years of conflicts with the U.S. army, the Sioux finally accepted the Second Treaty of Fort Laramie from the U.S. government in 1868 which guaranteed the Sioux a reservation in what is now southwestern South Dakota.
However, gold was discovered in the Black Hills in the mid-1870s, and the white men violated the clauses in the treaty by invading lands guaranteed to the natives. The Sioux resisted the whites’ advance into their land which angered the U.S. government which declared war on any native tribes that prevented it from taking over the land.
Sitting Bull was greatly agitated by this betrayal by the U.S. government and developed a deep distrust towards the white men. He led a successful battle against the American forces in 1876 fighting against General George Armstrong Custer in what became known as the Battle at Little Bighorn, wiping out the American general and all his men.
The U.S. government was greatly embarrassed by this defeat and increased its efforts to capture the territory from Native American tribes. The natives fought bravely under the leadership of Sitting Bull, but the steady encroachment of the whites threatened the tribes’ survival. Dejected and starving, more and more Sioux people surrendered to the U.S. authorities.
In May 1877, Sitting Bull, along with his remaining followers moved across the border into Canada where he remained for four years before returning to the Dakota territory in 1881. He was imprisoned until 1883.
He was allowed to leave the reservation in 1885 and go to Wild Westing with Buffalo Bill Cody’s Buffalo Bill's Wild West as a performer. He became a celebrity and earned a small fortune which he mostly gave away to the less fortunate. He remained with the show for four months before returning home. 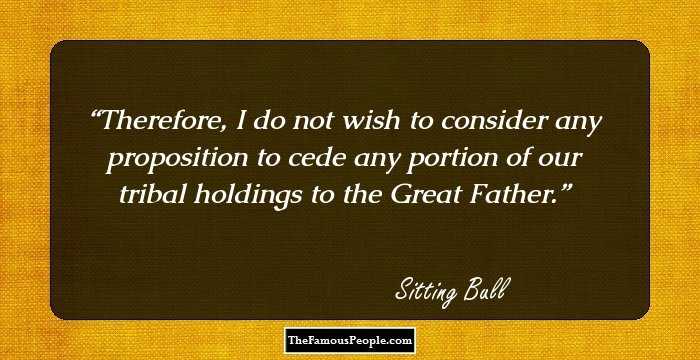 Quotes: I
Major Battle
Sitting bull is best remembered for the courage and valor he displayed in the Battle of the Little Bighorn, one of the major conflicts in the Great Sioux War of 1876 which was fought between the Sioux tribes and the United States. The tribes achieved an overwhelming victory in the battle by defeating the U.S. 7th Cavalry led by George Armstrong Custer.
Personal Life & Legacy
Sitting Bull had several wives as per the customs of his tribe, the notable ones being Light Hair, Four Robes, Snow-on-Her, Seen-by-her-Nation, and Scarlet Woman. He fathered many children and also adopted several others.
The Native Americans began spreading the Ghost Dance religious movement in 1889 which was aimed at annihilating the white people and reclaiming the Native American way of life. The U.S. authorities became concerned about Sitting Bull’s involvement in the movement and sent Indian police to arrest the chief. The police entered his home on December 15, 1890, and tried to arrest him. Sitting Bull was shot dead in the gunfight that followed.
On September 14, 1989, the United States Postal Service released a Great Americans series 28¢ postage stamp featuring a likeness of Sitting Bull.
Several Hollywood motion pictures and documentaries have been made about him and the culture of the Sioux tribes. 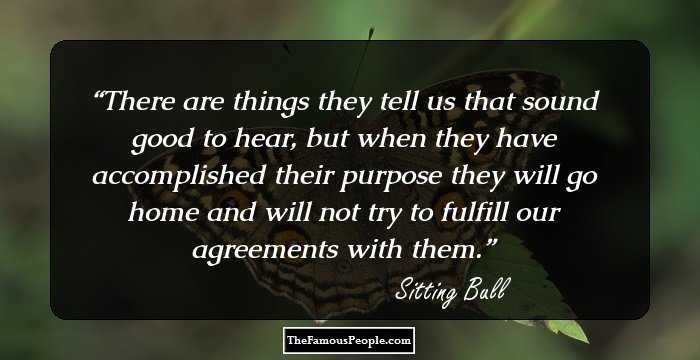 Quotes By Sitting Bull | Quote Of The Day | Top 100 Quotes

See the events in life of Sitting Bull in Chronological Order