Advanced Search
Michael Flynn is a retired United States Army Lieutenant General who served as the 18th Director of the Defense Intelligence Agency before being forced to retire from the military. He also was the 25th United States National Security Advisor, but his tenure lasted only 24 days, the shortest in the history of the office. He was forced to resign after details of his communications with Russian Ambassador to the U.S. Sergey Kislyak emerged and it became clear that he had lied to the vice president about his communications. According to intelligence reports, he discussed about President Barack Obama's sanctions on Russia with the ambassador. He was investigated by special counsel Robert Mueller and is currently awaiting his sentence for lying to the FBI. While Flynn was a registered Democrat and came from a "very strong Democratic family", he was among the keynote speakers on the first night of the 2016 Republican National Convention, before becoming a Trump surrogate.

American People
Political Leaders
American Men
Male Leaders
Capricorn Leaders
Childhood & Early Life
Michael Thomas Flynn was born on December 24, 1958, in Middletown, Rhode Island to Helen Frances Andrews Flynn and Charles Francis Flynn. His mother worked in real estate, while his father was a former Army sergeant and small-town banker. Both his parents were Roman Catholics of Irish descent.
He earned a bachelor's degree in management science from the University of Rhode Island in 1981. Later, he did an MBA in Telecommunications from the Golden Gate University. He earned a number of military degrees from the United States Army Command and General Staff College, the Naval War College, and the Ranger School. 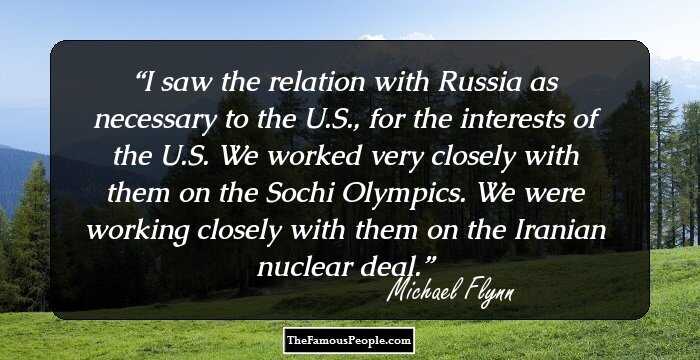 Continue Reading Below
Career
Upon joining the US Army, Michael Flynn was commissioned as a second lieutenant in military intelligence in 1981. He took multiple tours to Fort Bragg, North Carolina, with the 82nd Airborne Division, XVIII Airborne Corps, and Joint Special Operations Command. He was deployed for the invasion of Grenada and Operation Uphold Democracy in Haiti.
Later in his career, he served with the 25th Infantry Division at Schofield Barracks, Hawaii, at the Joint Readiness Training Center at Fort Polk, Louisiana, and the Army Intelligence Center at Fort Huachuca, Arizona. He became the assistant chief of staff, G2, XVIII Airborne Corps at Fort Bragg in June 2001, and served as the director of intelligence at the Joint Task Force 180 in Afghanistan until July 2002.
He was the commander of the 111th Military Intelligence Brigade from June 2002 to June 2004, following which he served as the director of intelligence for Joint Special Operations Command until June 2007. During this period, he took part in the ‘Operation Enduring Freedom’ in Afghanistan and ‘Operation Iraqi Freedom’ in Iraq.
Flynn subsequently served as the director of intelligence of the United States Central Command from June 2007 to July 2008, the director of intelligence of the Joint Staff from July 2008 to June 2009, and the director of intelligence of the International Security Assistance Force in Afghanistan from June 2009 to October 2010.
He was promoted to the rank of Lieutenant General in September 2011, following which he was assigned as the assistant director of national intelligence in the Office of the Director of National Intelligence. Following his nomination from President Barack Obama, he took charge as the 18th director of the Defense Intelligence Agency in July 2012, and simultaneously became the commander of the Joint Functional Component Command for Intelligence.
In 2013, he became the first U.S. officer to be allowed inside the Russian military intelligence (GRU) headquarters in Moscow; however, his follow-up visit was blocked. When he announced ambitious changes in the DIA, he drew the ire of his superiors, who forced him to retire in August 2014 - one year earlier than his scheduled departure.
Following retirement, he and his elder son Michael G. Flynn established the Virginia-based consulting firm, Flynn Intel Group Inc, which offered private intelligence and security services. He also began appearing on television channels as a political analyst, including on Russian state network RT, and sat next to Russian President Vladimir Putin at an RT gala event. 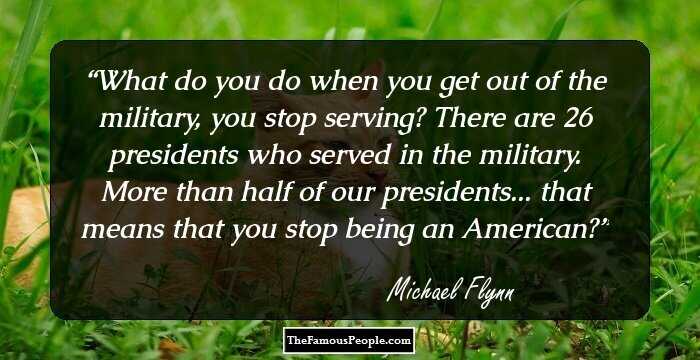 Controversies
In 2016, Michael Flynn co-authored the book 'The Field of Fight: How We Can Win the Global War Against Radical Islam and Its Allies' with Michael Ledeen. He started making even more public appearances after that. He was a keynote speaker at the 2016 Republican National Convention, and lead the "Lock her up!" chant against Democratic candidate Hillary Clinton.
Despite "profound concerns" expressed by President Obama to President-elect Trump against hiring Flynn to a sensitive, high-level national security post, he was made the National Security Advisor in January 2017. However, he was forced to resign on February 13, just 24 days after his appointment, when it was revealed that he had discussed Obama's sanctions with Russian ambassador Sergey Kislyak.
A number of congressional investigations looked into the allegations. His problems further increased when it was found that he had failed to register as a foreign agent, disclose compensation and comply with subpoenas. On December 1, 2017, he finally pleaded guilty of lying to the FBI about his conversations with the Russian ambassador and agreed to cooperate with special counsel Robert Mueller's investigation.
Family & Personal Life
Michael Flynn first met his future wife Lori Andrade when both of them were studying at Middletown High School in Rhode Island. He began dating her during his senior year. They got married in 1982 and have two sons, Michael Flynn Jr. and Matt Flynn. 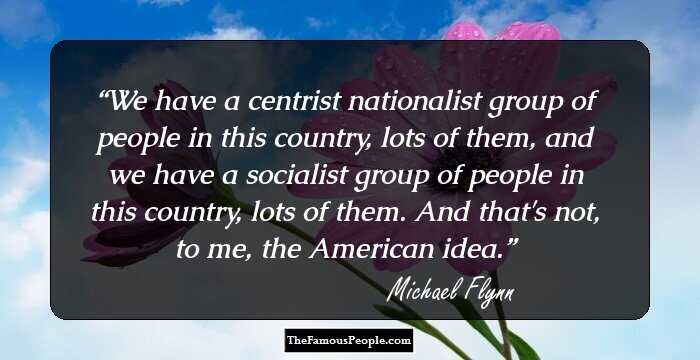 Trivia
Michael Flynn’s son Michael Flynn Jr., who served as the chief of staff at Flynn Intel Group, came under scrutiny for his involvement in the controversies that implicated his father. It has been reported that Michael Flynn agreed to plead guilty after he came to know that Mueller had enough evidence to charge his son as well.

Quotes By Michael Flynn | Quote Of The Day | Top 100 Quotes

See the events in life of Michael Flynn in Chronological Order