(Civil War Hero and the 18th President of the United States)

Ulysses S. Grant was a U.S. general and commander of the Union armies who went on to serve as the 18th president of the United States (1869–77). He played a very important role as an army officer during the ‘American Civil War’ and worked closely with President Abraham Lincoln to defeat the Confederates. Born to a businessman, he was expected to follow in his father’s footsteps by taking up his tannery business. However, since he displayed no interest in business, his father enrolled him to the ‘United States Military Academy’ at West Point. Though he was good at mathematics and geology, he did not perform well at the academy and earned only average grades. He proved to be exceptionally skilled at handling horses and gained a reputation as a proficient horseman. Following his graduation, he fought in the ‘Mexican-American War’ and retired from the army. Post his retirement, he tried his hand at a number of businesses but failed to find success. When the ‘American Civil War’ erupted, he returned to his army career and impressed President Lincoln with his abilities. Eventually, Grant entered politics and served as the president for two consecutive terms. American People
Military Leaders
Political Leaders
American Men
United States Military Academy
Childhood & Early Life
Ulysses S. Grant was born Hiram Ulysses Grant on April 27, 1822, in Point Pleasant, Ohio, USA, to Jesse Root Grant and Hannah. His father was a tanner.
He did not like working in his father’s tannery and instead chose to work on the family farm. He developed an ability to work with the horses and was very skilled in controlling even the unruly ones. He often sustained injuries as a result of working with the horses.
Since he had no interest in joining his father’s business, his father decided to send him to the ‘United States Military Academy.’ His name at the academy was erroneously listed as “Ulysses S. Grant,” and he decided to continue with this name.
He was not interested in military life and was lax in his studies. However, he did perform well in subjects like mathematics and geology, and gained a reputation as a skilled and fearless horseman. He graduated in 1843. 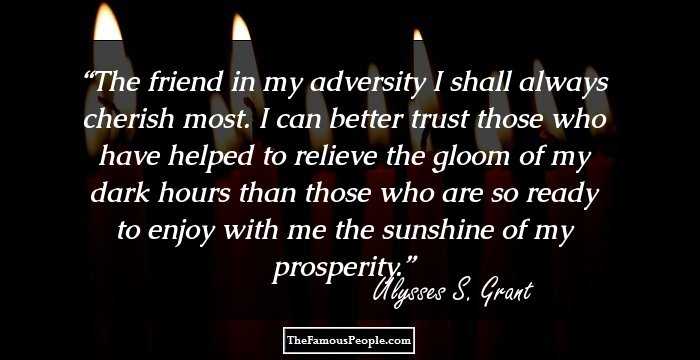 Quotes: Me, I
Continue Reading Below
Career
Following his graduation, Grant was assigned as a brevet second lieutenant in the 4th U.S. Infantry. When the ‘Mexican–American War’ broke out in 1846, he served under General Zachary Taylor in the Army of Observation. He led a cavalry charge at the ‘Battle of Resaca de la Palma’ and displayed great courage and bravery in the campaigns.
He was eventually promoted to first lieutenant and captain on account of his gallantry. He resigned from the army in 1854.
Over the next few years, he struggled to make a name for himself. He became involved in a series of businesses that failed miserably and he was not able to successfully establish himself in any profession.
‘The American Civil War’ broke out in 1861 and Grant decided to join the army again. President Lincoln called for 75,000 volunteers and recruitment drives were organized. Grant, an experienced army man, was asked to lead the recruitment drive and he helped recruit a company of volunteers and accompanied the regiment to Springfield.
Grant was appointed brigadier general and soon gained command of the District of Southeast Missouri, headquartered at Cairo, Illinois. He achieved the first major Union victory when Fort Donelson, which dominated the Cumberland River, surrendered with about 12,000 soldiers in February 1862.
Grant was promoted to major general of volunteers and he led his army into the enemy territory in Tennessee in April 1862. This campaign, which became known as the ‘Battle of Shiloh,’ was a major and fierce battle fought between the Confederate commanders and Grant’s army in which Grant’s army defeated the Confederates.
He continued displaying his valor throughout the war. After the war ended in 1865, Grant was promoted to full general and was given the responsibility of overseeing the military portion of post-war reconstruction. He was promoted to the newly created rank of General of the Army of the United States in July 1866.
During this time, he also became active in politics and was chosen by the Republicans as their presidential candidate on the first ballot at the 1868 Republican National Convention. He faced former New York Governor Horatio Seymour in the elections which Grant ultimately won.
Grant was sworn in as the 18th president of the United States on March 4, 1869. Aged just 46 at the time, Grant was the youngest ever to be elected as president. Interestingly, he was also politically inexperienced at the time.
Continue Reading Below
Within days of taking the office, he signed his first law, pledging to redeem in gold the greenback currency issued during the ‘Civil War.’ He advocated systematic federal enforcement of fundamental civil rights regardless of race. He also pushed for the ratification of Fifteenth Amendment which stated no state could prevent someone from voting based on race.
In order to establish peaceful relations with Native Americans, he appointed Ely S. Parker, a Seneca Indian and member of his wartime staff, as Commissioner of Indian Affairs. He also signed a law to establish a Board of Indian Commissioners to keep tabs on the Bureau of Indian Affairs.
Grant proved to be a popular president in his first term and was re-elected when he stood for presidency again in 1872. However, his second term was fraught with difficulties. ‘The Panic of 1873’ descended upon the American economy, setting off a long depression that lasted for more than five years.
He signed the ‘Specie Payment Resumption Act’ in 1875 which restored the nation to the gold standard. The act also reversed the inflationary government policies promoted after the ‘Civil War.’
During Grant’s second term, a congressional investigation exposed corruption in the Treasury Department. He also faced charges of misconduct in nearly all federal departments. He was also criticized for failing to detect and curb corruption within his administration. Once a popular president, he now became increasingly unpopular. He stepped down from presidency on March 4, 1877. 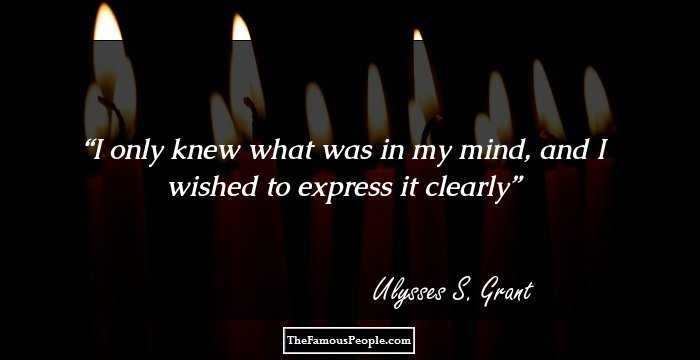 Quotes: I
Personal Life & Legacy
He fell in love with his friend’s sister Julia Dent in 1844 and became engaged to her. The couple got married on August 22, 1848, amid opposition from their parents. They faced many adversities in their marriage but remained steadfast in their love and commitment to each other till the very end. They were blessed with four children.
After stepping down as president in 1877, Ulysses S. Grant and his wife embarked on a long world tour that lasted more than two years. They were received warmly wherever they went and got the opportunity to meet Queen Victoria, Pope Leo XIII, and Japanese Emperor Meiji. They finally returned to the U.S. in 1879.
In 1884, Grant was diagnosed with throat cancer. Despite his illness, he worked on his memoirs which were published as ‘Personal Memoirs of Ulysses S. Grant’ in 1885 shortly after his death. The book was a commercial and critical success.
After battling cancer for several months, Ulysses S. Grant died on July 23, 1885. His tomb, which is popularly known as ‘Grant's Tomb,’ is the largest mausoleum in North America. It is situated in the ‘General Grant National Memorial,’ New York City, New York, USA.
Recommended Lists:
Leaders #57

See the events in life of Ulysses S. Grant in Chronological Order