(Founder of the Salvation Army, Preacher)

William Booth was an English preacher and humanitarian who founded the Salvation Army, a Christian set up that inspired people to revert to religious belief for their betterment. Respectably entitled as ‘The Prophet of the Poor’, he was born in poverty and spent his entire life working for the ones struggling with poverty. Seeing his life’s purpose only to save as many people as possible, he offered ways of mitigating the evils of poverty like charity, education, training and most importantly saving souls. The movement founded by him spread to other parts of the world and provides large humanitarian aid to people all over the world. Roger Williams
10th April In History
DID WE MISS SOMEONE?
CLICK HERE AND TELL US
WE'LL MAKE SURE
THEY'RE HERE A.S.A.P
Quick Facts

British Celebrities
British Men
British Preachers
Briton Theologians
British Intellectuals & Academics
Childhood & Early Life
William Booth was born on April 10, 1829 in Sneinton, Nottingham, England to Samuel and Mary Moss Booth. His parents had five children, William being their only son.
His father was a successful building contractor but faced a slowdown in 1842 and the atrocities of poverty affected the family intensely. The booth family had to give up on their expenses and William’s education was one of it.
Being out of school, William was made to work with a pawnbroker at the age of thirteen only during which he converted to Methodism (which lays more emphasis on preaching to foster devotion as against ceremonial devotion)
Intensive reading and training from other preachers further polished his oratorical and writing skills thereby helping him become a Methodist lay preacher.
At an early age of fifteen Booth started off with preaching on streets on behalf of a Methodist chapel. 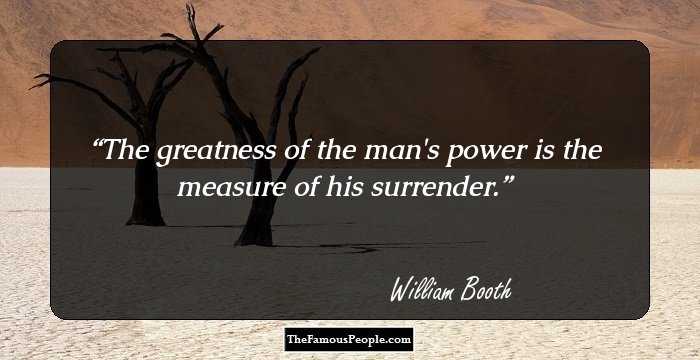 Quotes: Power
Continue Reading Below
Career
His close friend Will Sansom influenced him to become an evangelist. The duo started the Mission Ministry through which they preached in Nottingham especially to the downtrodden and sinners in the 1840s.
Under the Mission Ministry, he along with his companions met in cottages in night, sang songs and visited the sick and suffering. Unfortunately, they could not continue longer due to the demise of Sansom in 1849.
Lack of work took him to London where he started to work with a pawnbroker and tried establishing preaching there. The paucity of work bothered him and he eventually resigned.
William Booth got associated with the Reformers through the Methodist Reform Church in 1851. The following year, he quit pawn-broking and took to preaching round the clock at Binfield Chapel in Clapham.
His preaching was said to be highly influenced by James Caughey, who paid preaching visits to the church in Nottingham while William was stationed in England.
His inclination towards Congregations was supported by David Thomas, John Campbell and James William Massie. Although he started to train under Rev. John Frost for ministry but quit the same as it did not impress him much.
In November 1853, he became the Reformer’s Minister at Spalding in Lincolnshire but had to eventually resign as the evangelistic campaigns got neglected with his engagements with the ministry.
In 1861, when his request to be freed for evangelism full-time was refused, Booth resigned from the ministry of the Methodist New Connexion.
Post his resignation, he became an independent evangelist preaching on subjects of eternal reprimand, Gospel of Jesus Christ and alike.
Continue Reading Below
In 1865, while preaching the crowds on street, he was invited by some missioners to lead a series of meetings they were holding in a large tent. Thereafter, he was invited at a number of places to preach.
Following his popularity and acceptance by people, he along with his wife Catherine started the ‘The Christian Revival Society’ (later renamed as The Christian Mission) wherein meetings were held and William preached on topics such as repentance and salvation that comes to the downtrodden and sinners by accepting Jesus Christ.
Despite several hardships, William continued his work of helping the poor and needy by distributing food and clothing. Facing criticism from local people for his evangelizing, he still continued in a fatigued and devastated state after being a victim of urchin’s outrage.
Booth’s first converts to Christianity consisted of thieves, prostitutes, gamblers, and drunkards who were not accepted by churches for their ill deeds. Booth’s motivation to such people to preach the power of the Almighty helped lessen the sufferings of others.
Booth’s Christian Mission became one of around 500 charitable and religious organizations that were trying to help the poor and needy in London's East End.
William believed himself as a soldier in service of God and not a volunteer as many believed. In the face of this, he changed the name of the ‘Christian Revival Society’ to ‘the Salvation Army’ in 1878.
‘The Salvation Army’ was modeled after the military. William was addressed as the ‘General’ while others were ‘officers’.
The set up and the management of the Salvation Army took the organization to great heights so much so that its presence went global. Booth’s leadership was commendable too. He travelled extensively to spread charity to over 58 countries around the world.
His book ‘In Darkest England and the Way Out’ (published in 1890) focused majorly on the societal well being resting base on evangelical principles inspired by Christianity.
Continue Reading Below 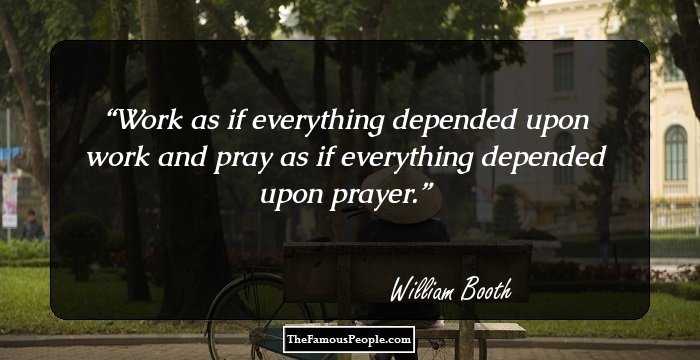 Awards & Achievements
A poem,"General William Booth Enters Into Heaven", was written by Vachel Lindsay in William Booth’s honor which was later tuned into music by Charles Ives.
A diesel locomotive, ‘the William Booth’ in British Rail fleet was named after William Booth in 1990.
Booth became the Freeman of the City of London in 1906 and was honored with an honorary degree from the University of Oxford.
The Agriculture and Agri-Food Canada developed the William Booth Rose in his honor.
The college for Officer training of the Salvation Army in UK, the William Booth Memorial Training College in Denmark, a primary school, William Booth Primary School in Nottingham, and even a lane in central Birmingham all take his name as an honor.
The statues of William and Catherine Booth by George Edward Wade were established adjacent to the Salvation Army’s training college in London on Champion Hill in 1929.Personal Life & Legacy
William got married to Catherine Mumford on June 16, 1856 at Stockwell Green Congregational Church in London. The couple had eight children.
He was diagnosed with blindness in both eyes in 1899 but it did not deter his work. During one of his last trips to the United States, he was declared blind from right eye which was eventually removed and the left eye also suffered from cataract.
General Booth passed away at the age of 83 on August 20, 1912 in London, England. As a mark of respect, around 150,000 people were seen by the casket, and around 40,000 people including Queen Mary attended his burial.
He was cremated aside his wife at the Abney Park Cemetery in Stoke Newington.
The Salvation Army continued to grow even after his death on the solid foundation laid by him. His son, Bramwell Booth took charge post William Booth’s death.
The Salvation Army also faced a lot of criticism for being ‘Anti- Christ’. Booth was accused as domineering and a hard task master thereby resulting in many denouncements.
He was also believed to be building his own family business out of the Salvation Army by promoting his children at higher posts.

See the events in life of William Booth in Chronological Order