John Cotton, a highly respected and knowledgeable clergyman of the early 17th century, was an outstanding scholar who advocated for bringing about reforms in the manner the Anglican Church operated. An eminent theologian of the Massachusetts Bay Colony, he was a Puritan who established the first church in Boston along with John Wilson. He served as a teacher in the church and played an important role in the establishment of America’s first public school - The Boston Latin School. He was an excellent preacher and an eloquent speaker whose views and opinions were greatly respected. He was often consulted for advice in settling issues both in the political and church matters. The son of a lawyer, he was exposed to religious studies from an early age. He studied rhetoric, philosophy, Greek, astronomy and logic in colleges and was regarded highly educated in his time. He also developed his preaching and oratory skills for which he would become famous later on. He was especially influenced by the teachings of the Cambridge theologian, William Perkins who was one of the foremost leaders of the Puritan movement. He was a notable speaker who spoke with such authority and clarity that listening to him was like listening to the speeches of none other than Jesus Christ. Lori Bakker
DID WE MISS SOMEONE?
CLICK HERE AND TELL US
WE'LL MAKE SURE
THEY'RE HERE A.S.A.P
Quick Facts

American People
British People
British Men
Emmanuel College
British Preachers
American Preachers
Childhood & Early Life
He was one of the four children of lawyer Rowland Cotton and his wife Mary Hurlbert, a pious lady.
Young John was educated at Derby School where he was taught by the ordained priest Richard Johnson. He later went to Trinity College from where he completed his matriculation in 1598. He received his B.A. in 1603.
He went to the Puritan college, Emmanuel College and completed his M.A. in 1606. He continued his studies and read Hebrew, theology, and disputation. He also began preaching at this time. He was already well-versed in Greek and perspective. 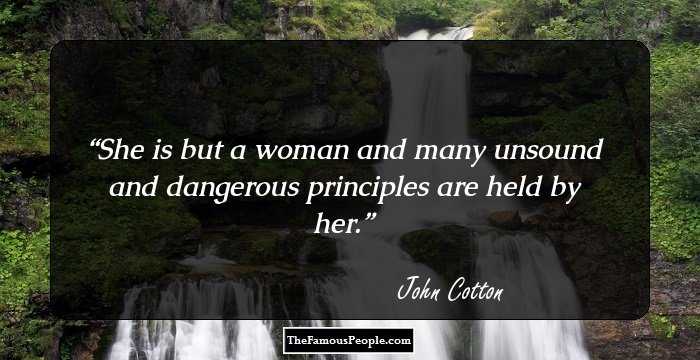 The Sexiest Men Of 2020, Ranked
Career
He was ordained as a priest and deacon in July 1610 and became the minister at Saint Botolph’s church in Boston in 1612. He was only 27 years old at that time but was already gaining fame for his scholarly and persuasive preaching. He received his Bachelor of Divinity in 1613.
He was deeply influenced by the teachings of the Puritan theologian William Perkins from whom he learned to be practical, sensible and flexible. He himself was a non-conformist Puritan.
He received an intuitive message that he had been called for Salvation. He understood that his life’s calling was in preaching and teaching. Through his preaching he convinced John Preston, the future master of Emmanuel College to convert.
He was strongly anti-Catholic and opposed the established English church. As a puritan he believed it was necessary to bring reforms in the established church, and that these reforms should come from within.
Puritans had four basic agendas: Seeking moral transformation, practicing piety, returning to the Bible, and strictly following the Sabbath. As a devoted Puritan, Cotton followed all the four of these.
During the 1610s, he worked at St. Botolph’s Church where non-conformity was already being practiced. His lectures and preaching became so popular that many people flocked to hear him speak. He now lectured on Sundays, Wednesdays, and Thursdays.
Puritans from all over wanted to correspond with this great scholar. He was earning a very good salary by 1615 and established a church within his church and held special services with focus on Puritanism in its truest sense.
Over the next decade he was consulted by several young ministers who were facing crises in their lives. Many colleagues and students also came to him for advice.
Since he was a non-conformist, legal action was taken against him in 1632 and thus he immigrated to the Massachusetts Bay Colony in 1633. There he became the first teacher of the First Church of Boston and served there till his death.
He became member of a committee to make a draft of laws that corresponded to the Word of God in 1636. The code was later titled ‘An Abstract of the laws of New England’.
He was a prolific writer and left behind a legacy of numerous sermons, a catechism and a shorter catechism for children titled ‘Spiritual Milk for Boston Babies’. This was considered as the first children’s book by an American.
Personal Life & Legacy
He married Elizabeth Horrocks in 1613. The couple did not have any children and his wife died of malaria later on.
In 1632 he married Sarah who was the widow of Roland Story. His second marriage produced six children.
He became very ill in late 1652 and died in December. He was interred in the King's Chapel Burying Ground in Boston.
Several of his descendants went on to become famous and successful including his grandson Cotton Mather who also became a well-known minister and historian.
Trivia
Actor John Lithgow is a descendant of this very famous 17th century theologian.
You May Like

See the events in life of John Cotton in Chronological Order