(One of the Most Popular Writers in Europe in Her Lifetime)

George Sand was the pseudonym of Amantine Lucile Aurore Dupin, who was a French novelist. After her marriage with Baron Casimir Dudevant at a young age, she visited Paris alone in quest of true love and economic independence. Her experience of developing a number of relationships with different men in Paris acted as an inspiration for several of her novels. Almost all of her novels depict love stories of the people whom she knew in real life. She presented those stories in a realistic manner. In later period of her life, she used to describe deplorable condition of working class people through her novels like ‘Consuelo’. Her novels like "La Mare au diable" and "La Petite Fadette" present a clear picture of country life and she wrote most of these novels while living at Nohant. Being a democrat, she reflected her political views through her literary works. Though her writings represent her feministic attitude, yet she never wrote in support of political equality of women. Rather, she defended the independence of women in choosing their love objects. She spent her later years surrounded by her grandchildren for whom she authored "Tales of a Grandmother". Stendhal
DID WE MISS SOMEONE?
CLICK HERE AND TELL US
WE'LL MAKE SURE
THEY'RE HERE A.S.A.P
Quick Facts

French People
French Women
Cancer Writers
Women Writers
French Writers
Childhood & Early Life
Born as Armandine Aurore Lucille Dupin in Paris, France, she was the daughter of Maurice Dupin, a soldier and Sophie Delaborde. Her father was the grandson of Maurice,Comte de Saxe, the illegitimate son of King of Poland. Her mother was a commoner.
Armandine lost her father at the age of four. After that, along with her mother and grandmother, she shifted to Nohant where her grandmother owned an estate.
She attended the convent of the Dames Augustines Anglaises in Paris in 1817. Later, she left the convent and returned to her home at Nohant. At home, she spent time by studying various aspects of nature and practiced medicines on the peasants.
She also studied the works of the philosophers of different eras. During this time, she was influenced by the literary creations of Francois Rene Chateaubriand, a French writer. 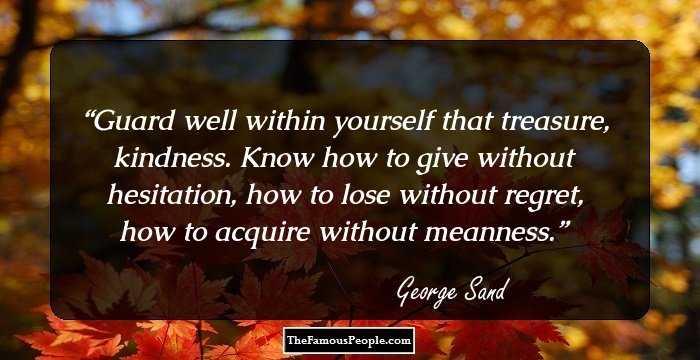 Quotes: Yourself
Continue Reading Below
Career
After the death of her grandmother, she became the owner of her grandmother's estate at Nohant. In January 1831, she went to Paris to establish her own identity and to find true love.
After reaching Paris, she used to earn her livelihood by writing articles. At that time, she became acquainted with a number of writers there. She has affairs with various writers, such as, Jules Sandeau, Prosper Merimee, Alfred de Musset and others.
There she met Henri de Latouche who acted as her mentor. As the director of ‘Le Figaro’, he accepted some of her writings that she wrote with Jules Sandeau under the pseudonym Jules Sand.
In 1831, her novel “Rose et Blanche” was published . This was her first published novel and it was her combined effort with Jules Sandeau.
In 1832, her first independent novel ‘Indiana’ was published, which she wrote under her famous pseudonym George Sand. She adopted this pseudonym for her subsequent novels too.
Her earlier works such as 'Lelia' (1833), 'Mauprat' (1837), 'Spiridion' (1839), and 'Les sept Cordes de la lyre' (1840) were influenced by the various men with whom she was associated.
After dabbling in social and class relationships in her writings, she found her true calling in her rustic novels, which were based on her childhood experiences of the countryside, and reflected sympathy for the poor. Her novels based on rural settings include 'La Mare au Diable' (1846), 'Fran�ois le Champi' (1847–1848), 'La Petite Fadette' (1849), and 'Les Beaux Messieurs Bois-Dore' (1857).
From 1854 to 1855, she was busy in writing her autobiography ‘Story of My Life’. 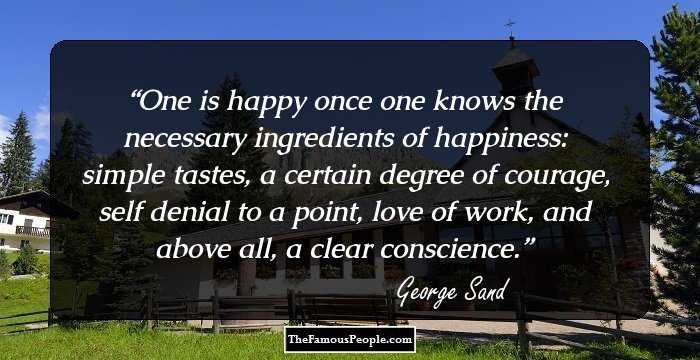 Quotes: Love
Continue Reading Below
Major Works
She published her first independent novel ‘Indiana’ under the pseudonym George Sand in April 1832. This novel represents an interesting description of the social life of the women of nineteenth century.
Her novel ‘Valentine’ presents the love story between two persons belonging to different economic background. It describes the story of a lady from an aristocratic family and her love with a peasant .
She published ‘Jacques’ in 1833. This novel unfolds the story of a retired soldier and his young bride. Through this novel Sand for the first time dealt with the issues of a male character who is a protagonist of this novel.
Personal Life & Legacy
She tied the nuptial knot with Baron Casimir Dudevant in 1822. Casimir was the illegitimate son of Baron Jean-Francois Dedevant. With Casimir, she had two children, Maurice and Solange.
For a brief period , she developed a romantic relationship with Aurelien de Se-ze. Without caring about her husband and children, she went to Paris in search of love and independence.
There she developed relationship with Jules Sandeau, a writer. When she got tired of Sandeau's lazy nature and jealousy towards her, she ended this relationship.
After a short period, she fell in love with poet Alfred de Musset. After her divorce with Casimir in 1835, she gained legal custody of her child Solange. During this time, she developed romantic relationship with a number of men.
She was romantically involved with Polish music composer Frederic Chopin, Prosper Merimee, Alfred de Musset and Felicien Mallefille. Her close friendship with actress Marie Dorval spread rumours about their lesbian relationship.
She spent her last days at Nohant with her friends and family. The natural beauty and serenity of this place helped her to find peace in nature, children and God.
She passed away at the age of 71. 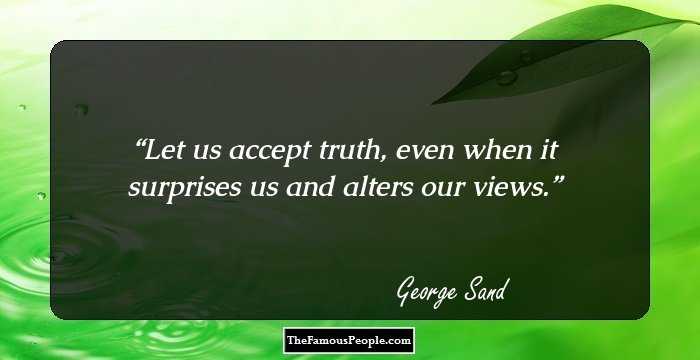 Trivia
With support from her eccentric tutor, this French novelist used to dress like a man and ride horse before her marriage. At that time, she used to travel the countryside in men's attire without caring much about social restrictions for women.

Quotes By George Sand | Quote Of The Day | Top 100 Quotes

See the events in life of George Sand in Chronological Order