Gustave Flaubert was a French prose writer considered to be one of the best western authors of his time. He was born and brought up in France and was a part of a rich family. He was not a brilliant student and studied under strict and controlled environment when he was young. He started taking interest in writing from the age of eight and produced some intellectual work at the age of fourteen. He initially took interest in law and went to Paris where he made friends like the great writer Victor Hugo. But soon he realized that he had no taste for Paris or law and settled in Croisset after his father passed away and left all the inheritance to him. He became a full time writer from there on and wrote beautiful novels like ‘November’, ‘Madame Bovary’, ‘Slammbo’, etc. He was notoriously famous for keeping relationships with prostitutes and never got married in his life. He was in a romantic relationship for many years with a poet called Colet and devoted his life in taking care of his mother and niece. He suffered from epilepsy and died of cerebral hemorrhage. Antoine de Sain...
Novelists #131
Writers #327
DID WE MISS SOMEONE?
CLICK HERE AND TELL US
WE'LL MAKE SURE
THEY'RE HERE A.S.A.P
Quick Facts

French People
French Men
Male Writers
French Writers
Male Novelists
Childhood & Early Life
Gustave Flaubert was born on 12 December 1821 in Rouen, France, to Achille-Cleophas Flaubert and Anne Justine Caroline. His father was a chief surgeon and his mother was a daughter of a doctor. He was the second son to his parents.
Gustave family used to live in a house located right next to the hospital. His older brother used to live away from the family and was a brilliant student. Flaubert and his sister spent most of their childhood struggling from illnesses.
From the age of 3, Flaubert was in the care of by a family servant called Julie who stayed with the family until her death. His sister died during childbirth; she had a great influence on him and he was very close to her.
He was very poor in studies; his mother used to teach him at home. Therefore, it was decided that he would be sent to Royal de Rouen which was a strict school. He started to write historical work of literature at a young age.
His famous works like: ‘La Lutte du Sacerdoce et de I’Empire Chronique Normande’, ‘Derniere Scene de la Mort de Marguerite de Bourgogne’ , ‘La Mort du Duc de Guise’, Le Moise des chartreax’, ‘Loys XI’, etc. were written when he was an adolescent.
His father died in 1846 and Flaubert received huge inheritance which he used to relocate to the family estate in Croisset. He started concentrating completely on his writing there. His sister died around the same time. 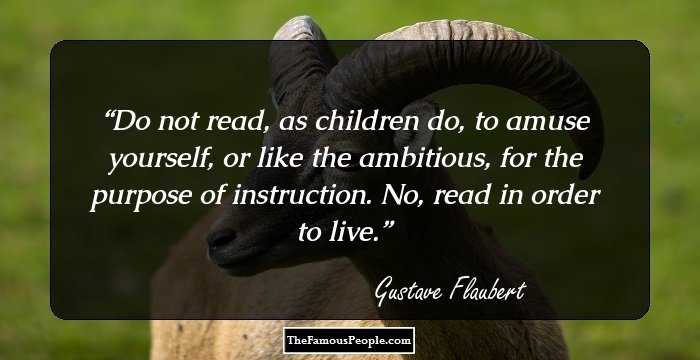 Famous Beautiful Women With Green Eyes
Career
In 1842, Flaubert wrote a novella called ‘November’. It is considered to be his first completed work. The novella’s narrator is a schoolboy who is going through a spiritual and sexual transformation and is at the verge of his adult life.
In 1849, he wrote his first full novel called ‘The Temptation of Saint Anthony’. The book was on the fantasy storyline and he read it uninterrupted to his writer friends, Louis Bouilhet and Maxime Du Camp.
In 1850, he started working on the biggest novel of his career ‘Madame Bovary’, which took five years to get finished, after returning from his trip to Egypt. The book was published eventually in a serial version in Revue de Paris.
In 1858, he started working on his novel ‘Slammbo’ after retuning back from Carthage. The novel was extensively worked upon and got finished in 4 years time. He became a part of the intellectual court of Napoleon III.
From 1862-1877, Flaubert published books like: ‘L’Education Sentimentale’, ‘LaTentation de Saint Antoine’, ‘Trois Contes’, ‘Le Candidat’, ‘Le Duex Cloportes’, ‘Three Tales’, etc. 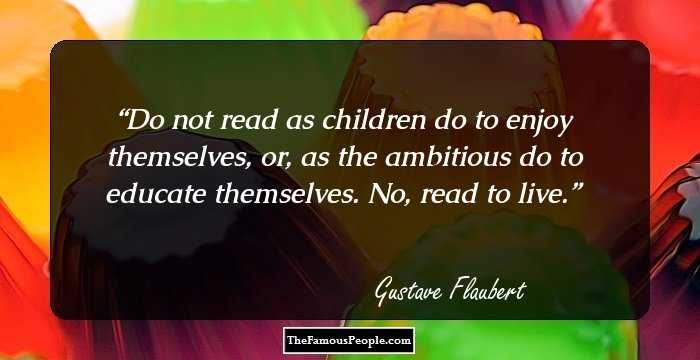 Quotes: Children
Personal Life & Legacy
Flaubert never got married; instead he devoted his life in taking care of his mother and his niece. Although he had an affair with a poet Louise Colet and they both used to write letters to each other.
He moved to Croisset especially to live near Colet and she was the only serious romantic relationship in his life. It is also said that Flaubert made some visits to England to see his mistress there from time to time.
After his mother’s death, Fluabert faced great financial difficulty to help save his niece’s husband financially. He was a victim of venereal diseases ever since his childhood and he died of cerebral hemorrhage in 1880.
Trivia
This famous French writer suffered from epilepsy for the whole of his life. 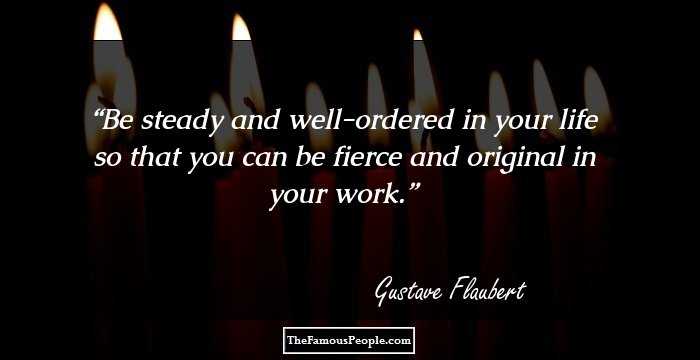 Quotes By Gustave Flaubert | Quote Of The Day | Top 100 Quotes

See the events in life of Gustave Flaubert in Chronological Order 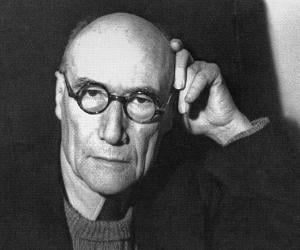