Alfred de Musset
2nd June In History
DID WE MISS SOMEONE?
CLICK HERE AND TELL US
WE'LL MAKE SURE
THEY'RE HERE A.S.A.P
Quick Facts

French People
Novelists
French Men
Male Writers
Gemini Writers
Childhood & Early Life
Donatien Alphonse François, Marquis de Sade was born on June 2, 1740, in Paris. His father, Jean Baptiste François Joseph was a diplomat in the court of Louis XV, and his mother, Marie Eléonore de Maillé de Carman, was a cousin and lady-in-waiting to the Princess of Condé. When he was a child, his father abandoned his mother, who took refuge in a convent.
He was his parents' only child, and was educated by his uncle. From childhood, he was rebellious and had a bad temper.
He attended Lycée Louis-le-Grand, a Jesuit college, in Paris for four years. There Abbé Jacques-François Amblet, a priest, tutored him. At school he received "severe corporal punishments," including flogging for repeated misdeeds.
When he was 14, he attended an elite military academy, and at 15, he was commissioned as a sub-lieutenant. He eventually became Colonel of a Dragoon regiment and fought in the Seven Years' War. 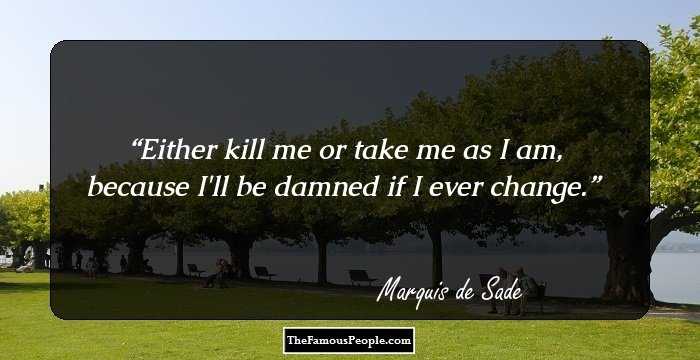 Quotes: Me, Change, I
Continue Reading Below
Later Years
Marquis de Sade often indulged in sexual brutalities against women, which inspired his pornographic writings. He was once forced to flee to Italy due to his sexual offences, and during that time he wrote ‘Voyage d'Italie’.
He was also often imprisoned for his sexual misconduct. While in prison, he started writing erotic works. He wrote a dialogue ‘Dialogue entre un prêtre et un moribond’ (Dialogue Between a Priest and a Dying Man) in 1782, while he was at Château de Vincennes. It was first published in 1926.
He wrote ‘Aline et Valcour; ou, Le Roman Philosophique’ when he was incarcerated in Bastille in the 1780s. The novel contrasts a brutal African kingdom with a South Pacific island paradise. It was published in 1795, his first book to be published under his true name.
In 1785, he wrote his infamous novel ‘Les 120 Journées de Sodome’ (The 120 Days of Sodom). Described as pornographic and erotic, it told the story of four wealthy male libertines who decide to experience sexual gratification in orgies. It was first published in 1904.
In 1790, during the French Revolution, he published several of his books anonymously. After The French Revolution in 1799, he supported the Republic, and served in several official positions. He was elected to the National Convention, and was a member of the Piques section, known for its radical views. He supported implementation of direct vote.
Marquis de Sade wrote ‘Justine, ou Les Malheurs de la Vertu’ (Justine, or The Misfortunes of Virtue) in 1791. It was the story of a young woman who recounts her tale while defending herself for the crimes she had committed, after being sentenced to death.
He opposed the Reign of Terror in 1793, and was critical of French politician Maximilien Robespierre. Eventually, he was removed from his posts due to "moderatism", and was imprisoned for a year.
His novel ‘Juliette’ was published in 1797. It told the story of Juliette, the sister of Justine (his book ‘Justine’s’ lead character), who, despite being a nymphomaniac murderer, was successful and happy.
In 1801, Napoleon Bonaparte ordered his arrest for the books ‘Justine’ and ‘Juliette’. Sade was then arrested and imprisoned without trial. Sade’s opinions on sexual violence, sadism, and pedophilia shocked even his contemporaries who were familiar with the dark themes of Gothic novels in the late 18th century.
Continue Reading Below 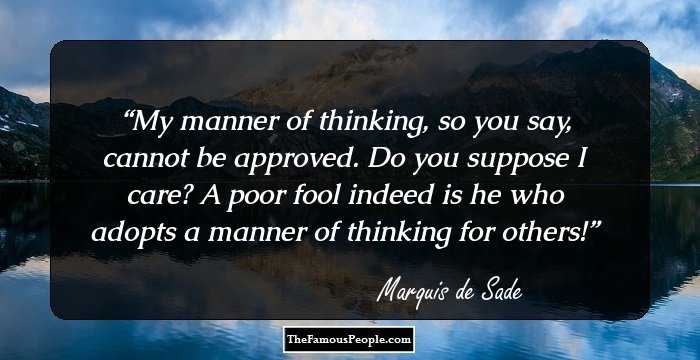 Quotes: You, I
Major Work
'La philosophie dans le boudoir’ (Philosophy in the Boudoir) is a 1795 book by Sade written in the form of a dramatic dialogue. Although initially it was seen as a work of pornography, the book was later considered to be a socio-political drama. In a bedroom, the two lead characters discuss that the only moral system that can reinforce French political revolution is libertinism, and if France fails to adopt the libertine philosophy, it will return to be a monarchic state.
Personal Life
Marquis de Sade lived a scandalous libertine life, and repeatedly indulged in severe sexual offences. He was also charged with blasphemy, a serious offense at that time, and was imprisoned several times for committing sexual brutalities against women.
In 1763, he expressed his wish to marry a rich magistrate's daughter, but her father rejected the proposal, and instead arranged his marriage with his elder daughter, Renée-Pélagie de Montreuil. The couple had two sons and a daughter.
After several imprisonments, he was exiled to his castle in Lacoste in 1768. In 1772, after an incident of non-lethal incapacitating of women with aphrodisiac Spanish fly and sodomizing a man, Sade was sentenced to death. He fled to Italy, taking his wife's sister with him. He was caught and imprisoned, but escaped after four months.
In 1789, when he was in Bastille prison, he shouted from his cell to the crowd outside that the prisoners are being killed, which was followed by a disturbance.Two days later, he was sent to the insane asylum at Charenton.
In 1790, after his release from Charenton, his wife obtained a divorce. Thereafter, Sade stayed with Marie-Constance Quesnet, an actress, who had been abandoned by her husband. Sade eventually became so poor that he had to sell his ruined Lacoste castle in 1796.
He was declared insane in 1803 and sent to Charenton Asylum. The director of the asylum, Abbé de Coulmier, allowed him to stage his plays, with the inmates as actors. In 1809, Sade was put into solitary confinement and was deprived of pens and papers. The government ordered all theatrical performances in the asylum to be suspended in 1813.
He died on December 2, 1814. After his death, his son burned all his unpublished manuscripts, including the multi-volume work ‘Les Journées de Florbelle’.
Sade had written in his will that his body should not be opened for any reason, and that it should remain untouched for 48 hours in the chamber where he died, and then placed in a coffin and buried on his property in Malmaison. However, none of these instructions were followed. In fact, he was buried at Charenton, and later his skull was removed from the grave for phrenological examination. 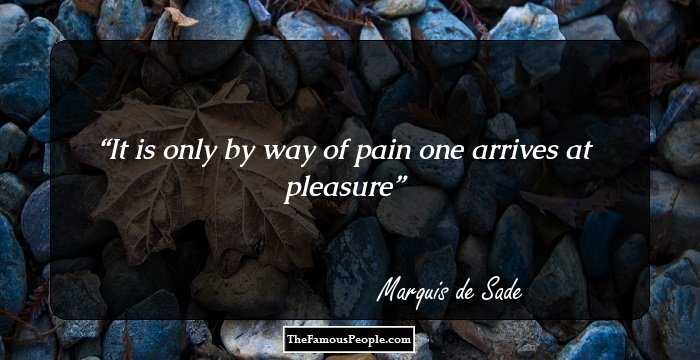