(Swedish Poet, Psychologist ,Translator and Winner of the 2011 Nobel Prize in Literature)

Tomas Transtromer was a ‘Noble Prize’ winning Swedish poet and psychologist. He is considered to be one of the most influential Scandinavian poets. He was one of Sweden’s most acknowledged poets. He penned down some of the finest haikus in Swedish. His work belonged to the modernist and expressionist language of 20th century poetry. His clear, seemingly simple pictures from everyday life and nature in particular reveal a mystic insight to the universal aspects of the human mind. In his later years, his work gradually shifted from the traditional and ambitious nature poetry written in his early twenties toward a darker, personal, and more open verse. His collections of poems have been translated into over 60 languages. Many well-known composers and musicians have worked with his poems. Apart from writing he was also a psychologist. This versatile poet died at the age of 83 in Stockholm. Pablo Neruda
15th April In History
DID WE MISS SOMEONE?
CLICK HERE AND TELL US
WE'LL MAKE SURE
THEY'RE HERE A.S.A.P
Quick Facts

Swedish Celebrities
Psychologists
Swedish Men
Aries Poets
Male Poets
Childhood & Early Life
Tomas was born on April 15, 1931, in Stockholm. His parents divorced when he was very young. He was raised by his mother who was a schoolteacher.
He received his secondary education at the ‘Södra Latin Gymnasium’ in Stockholm, where he began writing poetry. His initial poems were published in some leading journals in Sweden.
When he was 23-year-old, his first collection of poems, ‘17 Poems’, was published.
He graduated with psychology from ‘Stockholm University’ in 1956. During graduation he also studied history, religion and literature.
In 1960 he started working as a psychologist at the ‘Roxtuna center for juvenile offenders’. He worked there till 1966. During this period he also continued writing poetry.
Continue Reading Below
Career
By the mid-1960s, Tomas became close friends with poet Robert Bly. Robert had translated Tomas’s poems in English. Robert also helped arranged readings of Tomas’s poems in America. Thus he brought Tomas’s master work to Americans. These two friends used to correspond regularly through letters. They used to discuss the literary matters. This mail correspondence was published as a book ‘Air Mail’ in 2001, by Tomas’ publisher – Bonniers. The Syrian poet Adunis also helped spread Tomas’s work in the Arab world, accompanying him on reading tours.
Some of the his books which are translated in English include ‘The Half Finished Sky’ published in 1954, ‘Paths’ published in 1973 and ‘Balatics’ published in 1974.
Robin Fulton, who himself is an accomplished poet and translator, translated entire work of Tomas as ‘New Collected Poems’ in the UK in 1987. This collection was further expanded in 1997.
His poetry collection book, ‘Windows and Stones’ won an ‘International Poetry Forum Selection’ and was runner-up at the ‘National Book Award for translation’.
In 1990, a year after the publication of his tenth book of poems, Tomas suffered a stroke, which deprived him of most of his speech and partly inhibited movement on his right-hand side. However, he still continued to write.
In 1993, he has published a short autobiography-nature book - ‘Memories Look at Me’.
His 1995, his translated poetry collection ‘For the Living and the Dead’ received a huge response from English readers. It won many awards for translation.
In 2004, Tomas published a book containing five short poems and 45 haiku-type poems and named it ‘The Great Enigma’. These were added to the ‘New Collected Poems’ to form Tomas’ first collected edition to be published in US.
His English translated books ‘The half Finished Heaven’ (published in 2001) and ‘The Deleted World’ (published in 2011) were very well appreciated by readers and were in the list of ‘Best Sellers’.
Continue Reading Below
He also translated work of other poets including Robert Bly and Hungary’s János Pilinszky, into Swedish.
In addition to his work as a writer, Tomas was also a respected psychologist before suffering from stroke. He worked in juvenile prisons, and with disabled, convicts, and drug addicts.
He played the piano throughout his life. After his stroke, which paralyzed the right side of his body, he taught himself to play only with his left hand. He often said that the playing was a way for him to continue living after the stroke.
Major Works
Robin Fulton has extensively worked on Tomas’s poems. He has translated his entire work as ‘New Collected Poems’ in the UK in 1987. This collection was further expanded a number of times. This translated book has won many prizes. It is the most authoritative and comprehensive edition of his poetry published anywhere in English.
After a six-year silence after his stroke, he published his collection ‘Sorgegondolen’ (Grief Gondola) in 1996. This collection was translated into English by Michael McGriff and Mikaela Grassl as ‘The Sorrow Gondola’ in 2010. Some of the poems of this book were included in Robin Fulton’s translation of his ‘New Collected Poems’.
Awards & Achievements
Tomas won ‘The Nobel Prize in Literature’ in 2011. Before this prestigious award, he had won many other international awards for his poetry. The same year, ‘Cabinet of Sweden’ granted him ‘Title of Professor’.
In 1981, he received ‘Petrarch Prize’. This European literary and translation award named after the Italian Renaissance poet Francesco Petrarca.
He won Oklahoma University sponsored ‘Neustadt International Prize’ for Literature in the US in 1990. This prize is often compared with Nobel Prize in literary world. The same year he also won ‘Nordic Council Literature Prize’, for ‘For the Living and the Dead ‘.
Swedish Academy announced Tomas as the winner of 1991 ‘Nordic Prize’ for his contribution to the field of poetry.
For his collection of poems ‘Sorgegondolen’, Tomas won ‘August Prize’ by Swedish Publishers Association.
In his honor the city of Västerås established a special ‘Tranströmer Prize’ in 1997.
In 2007, he received a special Lifetime Recognition Award given by the trustees of the Griffin Trust for Excellence in Poetry, which also awards the annual Griffin Poetry Prize.
Personal Life & Legacy
Tomas married Monika Bladh. They have two daughters – Emma, born in 1961, and Paula, born in 1964. Emma is a well-known Swedish singer. She released an album based on Tomas’s poems. This album was a huge hit.
He died in Stockholm on 26th March 2015 at the age of 83, just two weeks and six days before his 84th birthday.
Recommended Lists:
Intellectuals & Academics #1816

See the events in life of Tomas Tranströmer in Chronological Order 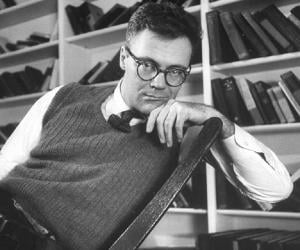